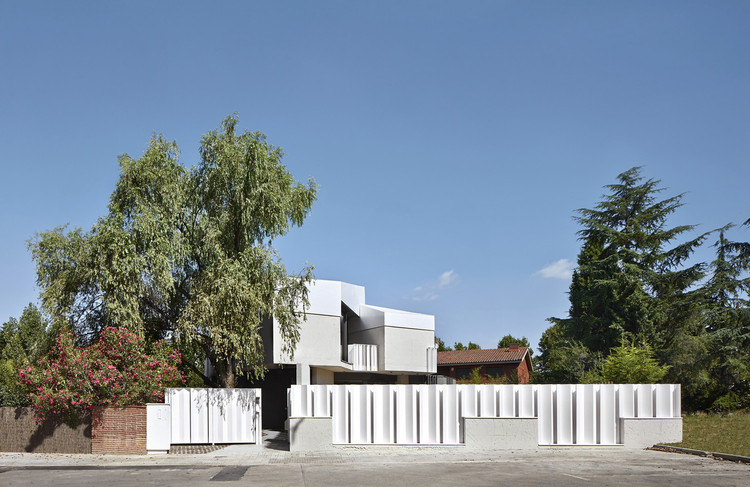 Text description provided by the architects. It is a house that would prefer to be more stuck in the ground. A house which seeks for its roots in a very clear and determined way. Radically deprived of any act that may hinder its real interest: the feet on the ground and the roof in the sky. The concrete structure and its screens end up defining the space almost prematurely; and the ceramic deck collects the reflections of the sun and the clouds. In this house the domestic space remains between the structure and the landscape.

The plot, that has a complex geometry as a result of being a residue of a residential zone, will end up positioning the house and the program. The house is organised in two floors. In the first level, at street level, the house, which contains a more public program, grabs to the ground thanks to the structure of the concrete walls. In the second level, hanging over the garden, are placed the rooms, which, thanks to the white ceramic layer of the house, camouflage with the clouds.

The interior of the house is organized around a double height central space that intertwines in a spiral way the ground level with the vitrified ceramic clouds. Modern architecture has made the roof one of the house’s appearance fundamental defining elements.

The Zinganshina house has allowed us to debate on the questions raised by Le Corbusier in announcing the need to understand the roof not only as a protective cover water element but also as the fifth facade and as a space. An issue that has reached our days, when, recently, the roof has overcome the requirement of having to be necessarily designed flat to be contemporary.

The Zinganshina House has given us the opportunity to transform the roof in the element that defines the image of the house. We haven’t proposed a flat roof, but instead a pitched roof that determines the exterior volume and the interior space of the house. A roof coated with vitrified enameled and matt hexagonal tiles that protect the roof slab.

The hexagonal pieces are modern white, as could not be otherwise. 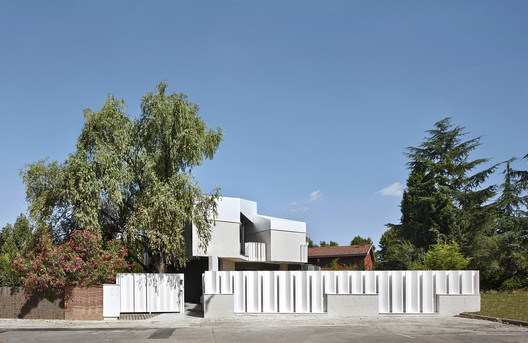