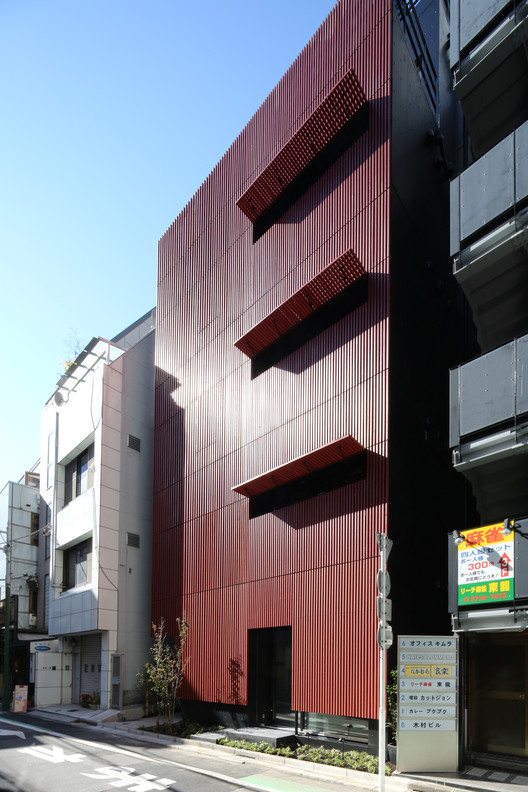 Text description provided by the architects. Facing a street near the JR Ebisu Station circle, the property is a restaurant building principally envisioned for tenants purveying Japanese cuisine. A compact lot of 76 m2 called for securing the most possible tenant floor space. The sky occupancy factor, which would limit the permitted obstruction of visible sky from land around the lot, was utilized in a study to determine how to gain the most cubic volume for a building. Consequently, the building configuration was set at six levels: tenant space of 48 m2 per level up to the fourth floor with a setback of 50 cm, and an additional setback for the fifth and sixth floors.

The lot runs along a street lined with disparate buildings. On a street of a commercial district infused with a cluttered ambience, we felt that a building could stand out on the street, and possibly bring order to the situation with the construction of a large, unifying façade.

Since exterior stairs have restrictions on their opening ratio, the only option for a single façade that included the staircase was a vertical lattice. We proceeded to select traditional Japanese vertical latticework called tategoshi as an element to render a Japanese visual motif.

A lattice spacing that satisfied the opening requirement for exterior stairs would be too broad for commanding a uniform façade across a large surface. As a solution, the density of the lattice was gradually increased from the front of the staircase across the façade to express unity and variance.

Wood was selected as the material for the lattice to impart warmth, and coated with traditional Japanese red-ochre paint, a natural material used for a long time as a preservative. The Japanese motif was enhanced, and the resulting distinction over the commercial buildings in its surroundings improved the building’s presence.

Maximizing floor space on a small lot is contradicted by building codes that inevitably impose setbacks for a building and its staircases. Moreover, many legal restrictions weigh on a building’s silhouette, such as the installation of balconies considered necessary for securing emergency egress, and result in a disorderly appearance. However, the messy silhouette of the Komachi Building derived from capturing maximum floor space was painted black to successfully serve like a behind-the-scenes actor to the red-ochre vertical lattice in the starring role.

From inside the restaurants that would mainly be operating from evening-time onward, scenic expectations were poor—possibly a view of the dimly lit tenant building across the street. For such an environment, we revisited the building’s vertical latticework to consider it as an element that could project characteristic scenes from the interior. Consequently, sections of the vertical lattice were finished as shitomido (traditional Japanese shutters), which could provide scenes like views from a traditional Japanese home with extended eaves. At night, footlights illuminated the shitomido to bring the generated exterior space inside for added spatial depth.

The shutter mechanism allows opening and closing. Since the setback distance can be determined with the shutters fully closed, the volume of the building can be maximized before gaining further volume from the “eaves” created by opening the shutters. In addition, the shitomido have manual shifters that allow their opening angles to be set freely. Depending on the opening angle of the shutters during the daytime, the amount of light drawn in can be altered to vary the interior ambience. Any shutter can also be closed for a view through the vertical lattice. By installing shutters to a planar element like a vertical lattice, the façade gains a dimension and can render expressions with light and shadows. 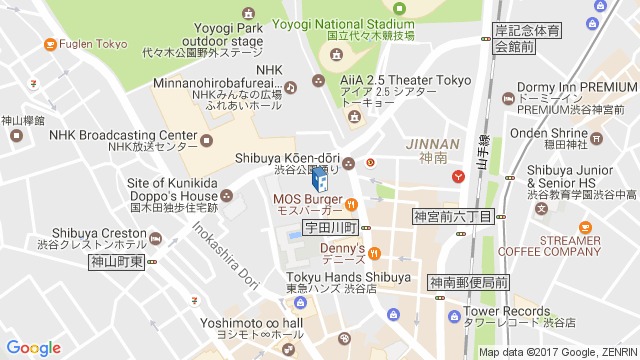