As part of an international competition, Narrowminded Architects teamed up with BOM Architects to identify and solve central functional deficiencies in a proposal for a new Marrakech Central Bus Terminal. Together, the architects found that obsolete infrastructure, unclear orientation, hazardous traffic density, rampant pollution, and confusing overlaps between vehicular and pedestrian flow were all contributing factors in the inefficiencies and hindered advancement of the terminal. Thus, with the intent to create a timeless environment that could flourish in Marrakech's future morphological developments, the proposal adopted a strategy to thoroughly address each individual issue.

The design prioritizes efficiency and order, placing focus on the following: independence of all transportation flows, spatial continuity and interdependence of all buildings, programmatic fragmentation to reduce the equipment’s overall scale, and creation of a vibrant, green pedestrian path linking the multiple infrastructural compounds.

The elongated is site is composed of three terminals, a volumetric division that places importance on the human scale and provides, through staggering, an effective method of occupying and activating the entirety of the site. Harkening to Morocco's construction heritage, the built volumes use rough concrete and red-tinted roofs, exuding a timeless yet contemporary visual link to the aesthetics of the city. 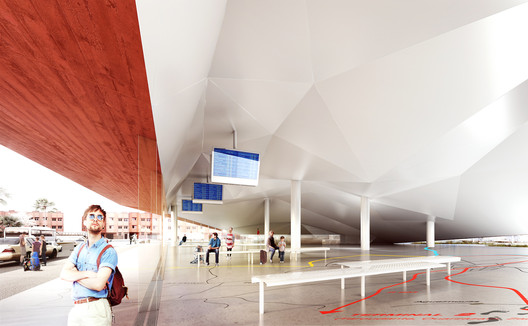