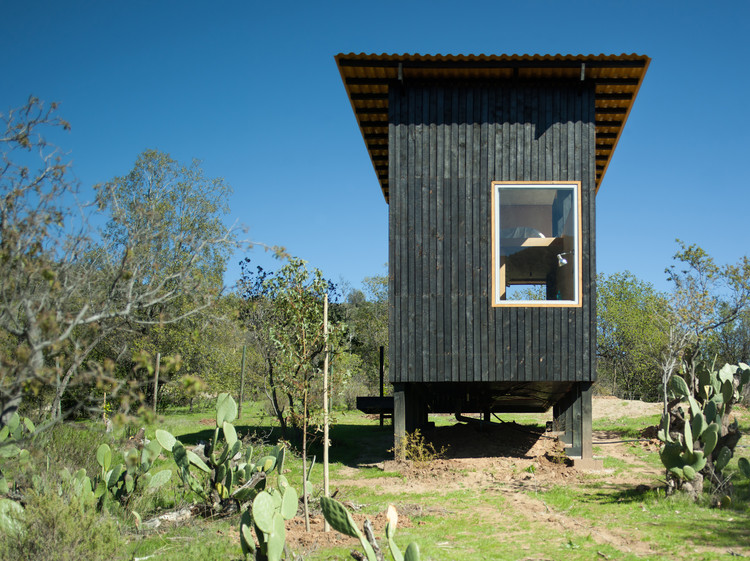 Text description provided by the architects. Commissioned as a mountain hideout, the Charred Cabin settles on a rather unusual location for Santiago inhabitants. Before the automobile era, a winding road linked the capital and the port across the Coastal Range. The area is full of historic places that recall the early years. Derelict Monuments, battle sites, gold mines remain nowadays abandoned.

Among the dominant slow-path countryside, an academic couple sharing the site with –peers- aim to profit from the melancholic atmosphere.

To fit in a budget the activities required to fulfil within the cabin were explicitly simple: a place to eat, sleep and read for two, everything else is to be offset outside. In contrast with the open surrounding, the cabin is designed as a shelter with a measured connection with the exterior, which can be understood in two moments.

The entrance level (1) is depicted by a single window with a particular height, which shapes the activities of the lofty room, whereas cooking and bathing are pressed by the mezzanine. In the middle of the floorplan a steel ladder allows for an attic (2) which differences with extensive horizontal windows framing iconic mountains.

Originally meant as a self-built permanent tent, the cabin takes shape from SIP panels. The prefab modules are arranged and proportioned in order to stand out from the steep terrain on stilts. Swiftly assembled by a party of three, the easiness of construction was mandatory.

In order to avoid chemical products, the cladding pine planks were charred onsite following traditional instructions. A thin layer of sooth must prevent the cabin from decay and weather effortlessly. On the inside plywood panels cover electricity and water piping whilst providing a warm finishing. 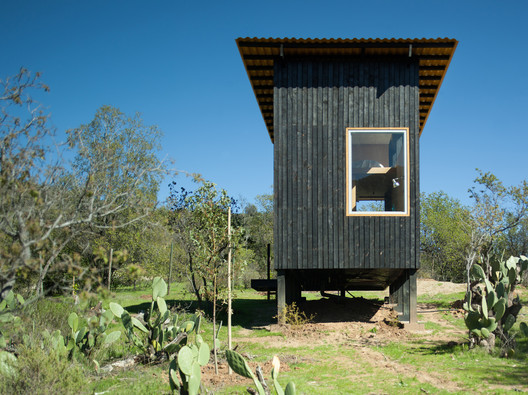