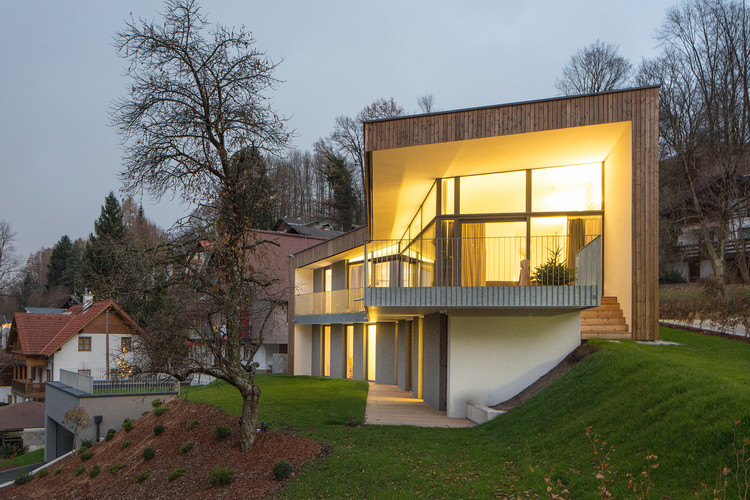 Text description provided by the architects. Developing a project in a privileged environment involves integrating it with it, as if it had always been there. When the topography is a prerequisite, it becomes an useful and successful partner for the project. With these premises in mind, we worked on the outskirt of Salzburg (Austria), at the city limits but overlooking it and with a very clear visual reference: the Alps.

The triangular plot, with a steep slope and two access roads enclosing it from north (mountain) to south (valley), surrounds the house and allows it to be very differently perceived depending on the point of view or situation. The volume is anchored on its west side, from where, as if it were an extrusion, fans out in plan and section in a south-easterly direction. With this simple gesture, providing greater internal volume to the main rooms while redirecting them towards the setting sun, the city and the mountains, is achieved. Similarly, the terrace opens itself from the axis of rotation, away from the house front façade and incrementing its surface on its east end. This is the only construction element which flies out from the house outline.

The volume presents itself hermetic from the mountain-north and open to the city and the views over the Alps to the south.  A veneer of larch wood slats is drilled through hollow squares of different sizes according to their function, generating an abstract facade as opposed to the lighter and airy south one.  It is this contrast which gives the perception of different scales depending on the visual approach to the site.

The house is built on three levels, connected via a wide triangular staircase located where the volume folds

The upper floor, from where the best views can be enjoyed, houses the public rooms (Kitchen, living room), the main entrance and the large terrace which acts as an extension of the living room. All areas share a spatial continuity which takes shelter under a large roof plane with a slight inclination of 5° from the kitchen to the large volume of the living room. The roof is solved by laminated wood boards (KLH), which allow large spans and cantilevers due to their flexibility and lightness.

The intermediate floor, partially buried and with direct access to the garden, houses the more private and intimate spaces (bedrooms, bathrooms, fitness and sauna). The Garage is displaced from the projection of the building and connects to the stairwell through a tunnel under the ground, where a long cloakroom is located. 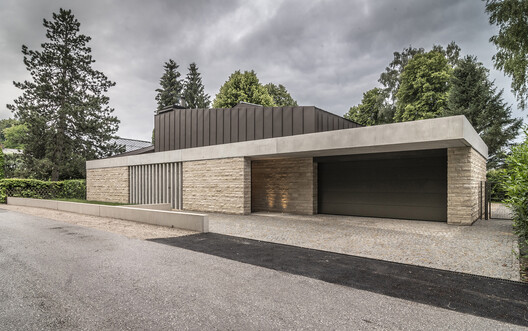