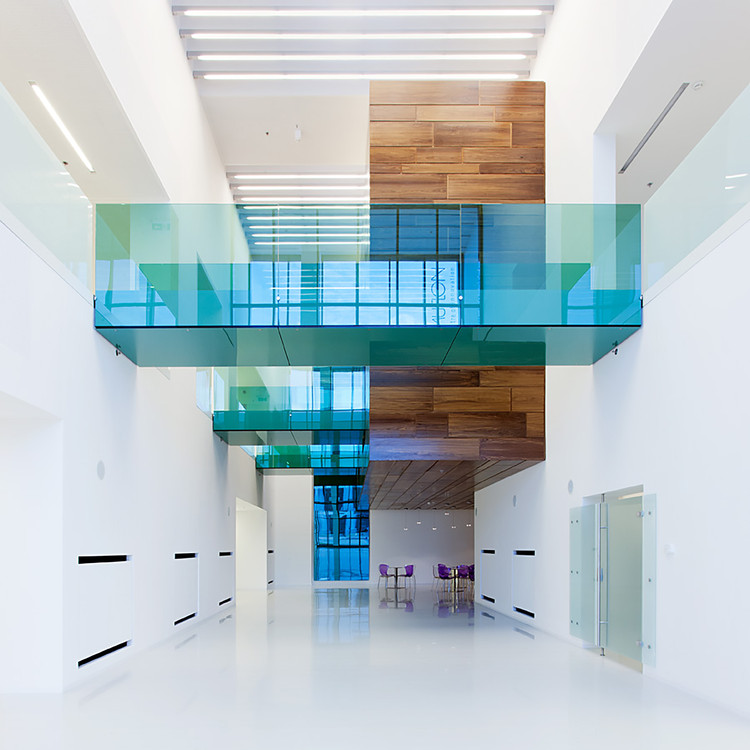 Text description provided by the architects. The ethereal centre of innovation project, unveiled in Hungary, stands for the mutual inspiration of science, technology and art. A twenty four meter passage surrounded by the reflections of reflections. Foldes Architects involved a glass sculptor to compose the illusion effects engaging the visual notion of all visitors.

Despite the economic challenges of the last years, the contact lens industry remained remarkably prosperous. A leading producer of contact lens and aftercare solutions, Sauflon, decided to establish a part of their lens production in Hungary.

A decision, which was followed by the foundation of a subsidiary company in 2005. The opening of the Hungarian production facility ensured a 35% yearly growth, therefore in March 2012 the British parent company decided to create a centre of innovation in Hungary to present the latest technologies in the form of a first class business and clinical training series of inspiring spaces. Five local architectural studios had been invited to tender for the project, which was eventually won by the renowned Foldes Architects.

Laszlo Foldes, chief designer of Foldes Architects, explained the concept that lay behind his company's presentation.

‘The task was to create an iconic yet functional centre of innovation which mainly serves as the showcase for the high-tech, innovative production methods used in the manufacturing of the latest generation, high-quality contact lens products of Sauflon. 700 people in 4 shifts work daily at the factory which shares the space with the centre of innovation. Though lens production can’t be compared to average factory operation it still meant the industrial to us. It challenged our minds how to couple it to a pure, event and conference oriented, guest welcoming, elegant space.

The concept derived from the definition of lens, the means of vision, and also we took inspiration from the high-technology of the lens industry, therefore clean, intelligent, integrated solutions as well as playful reflections, gloss surfaces and transparency played great importance during the design. This concept is supported by the resin flooring, the glass bridges, the opened-up volume and the tremendous flow of light streaming through the glass façade and the glass roof.’ He said.

Some 20 kilometres South of the capital, Budapest, in the heart of a modern industrial park, among bunches of metal masts, this hidden beauty is waiting for visitors from other lands. The physical production process is settled in the same building, only a door divides it from the centre of innovation space.

To the façade a huge glass surface is used to maximize the amount of light flowing in. After entering, the 10 meter high volume remains open and a 24 meter-long passage welcomes visitors with a sloped glass surface at the end which tricks the vision. On the right hand side the core functions are located: first a lounge with a 24m2 glass wall presenting the visual ID of the company, then a cloakroom hidden by ‘floating’ glass doors and finally the rebel pink glass covered cafe including kitchen and the mechanical room behind. Above, a wooden box is cantilevered, a house within the house, which serves as an auditorium with 32 seats and an integrated interpreter-cabin for conferences. The box can be entered from the upstairs guest area, through two green glass bridges. The next bridge gives access to the fitting room where clinical training is delivered and the newest lenses can be experienced. A 12 seat meeting room can be reached through the same bridge.

On the ground floor a white door opens up the secret of the Sauflon Centre of Innovation - visitors can enter the production area here which provides a unique opportunity to gain an insight into the technologies used by one of the most pioneering companies in optics. An iconic text welcomes their arrival: ‘Innovation is at the heart of everything we do.’

Collaborating glass sculptor, Andras Bojti remarked: ‘Our aim was to create and present all details in relation with each other, which resulted in a special experience for visitors, they sense the unity of the layers and surfaces based on these relationships, while moving around the centre. Thanks to the shared work with Laszlo Foldes and his team the result challenges the visitors in all possible ways: visually, spiritually and intellectually. This is an emblematic project that stands for the shared thinking process of a sensitive architect and an independent artist, also of the collaborative work model, and the implementation of a sculptor’s vision into a physical space. The therapeutic effect is the core of this project; the creation of an atmosphere to influence people enjoying exceptional experiences.’

Laszlo Moholy-Nagy, Hungarian origin artist of the 20th century drew the attention of the public to the importance and meanings of vision through his art works, theories and books, among which the Vision in Motion, speaking about the ‘man's fundamental qualities, of his intellectual and emotional requirements, of his psychological well-being and his physical health.’ All of these facets of the human experience were used in this exciting new project. 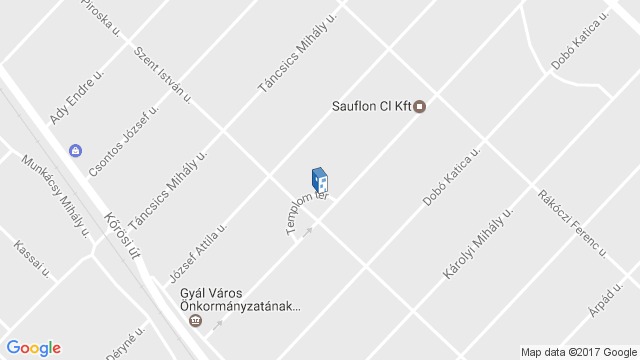