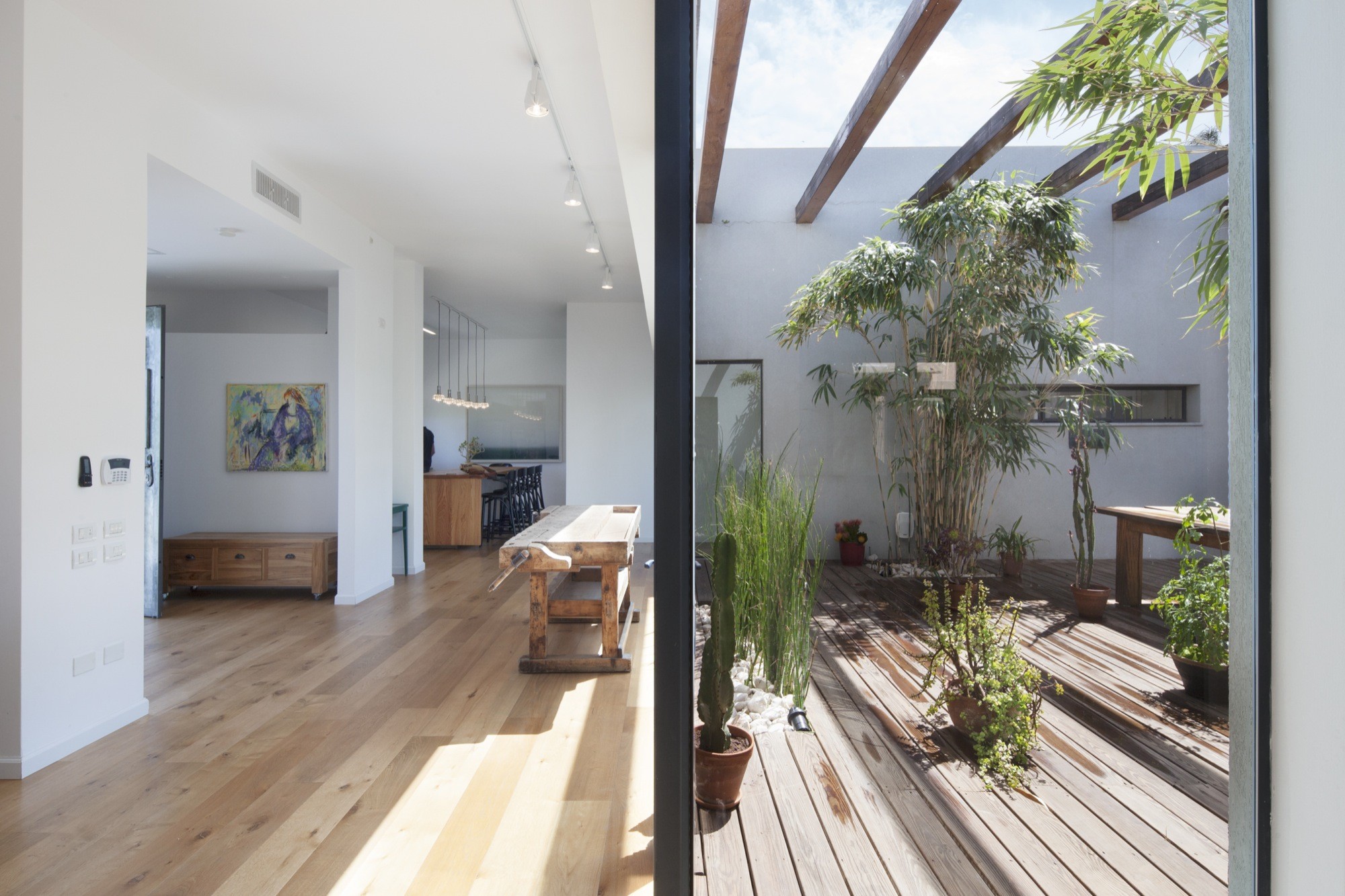 Text description provided by the architects. The house, which consists of only one floor, built on a 0.125 acre land, around 200 square meters, U shaped - space around a courtyard / patio, similar to the traditional Arab home spaces, contains a public space: kitchen, dining room, living room and a residential secure space, childrens wing includes: family room, bedroom and shower and parents wing includes a bedroom, shower and an office.

The renovation was headed by Henkin-Shavit office, managed by Irit Henkin, the house owner, and her partner Zohar Shavit. Due to their vast experience, they managed complete the work in a relatively short time, about a month, while emphasizing key  ged their elements in interior design:

Finish materials, flooring and coating - starts at the front door, which consists of two wings that had the existing color peeled off and removed, hand polished and painted with shiny lacquer. The existing floor which was porcelain tiles, was covered with carefully selected wide boards of aged natural oak parquet and pasted onto the pavement. The kitchen isle was covered by natural oak butcher, 2 inch thick, with an oil finish to it.

Electric and lighting- the house was equipped with a new electrical system with an emphasis on the functional and decorative lighting. Lamps purchased at the "Beauty Mark" flea market were hung over the work isle in the kitchen, they were attached to a single bus bar in order to avoid an excessive damage to the concrete ceiling, unnecessary ceiling lowering and to use the full non-standard ceiling height (330 cm). Similarly, on the bus bars, functional spotlights were placed, which highlight the walking routes and at night, form a light cage towards those sitting in the outdoor area – the patio. Over the dining room, a light source designed by the German lighting designer was hung, it allows an ease feeling in the space and it is affected by the air moving in the space, both by outside air and by the black fan in the living room (Wortiche – an Italian brand purchased at "Ayelet Lighting").

Ordered Furnishing – the dining room furniture consists of a round table made of white Formica, produced for office furniture, bought at "Waxman", around it are white "Eames" chairs purchased at the "Items" gallery in the flea market. At the family room, it was decided to make use of industrial shelves of "Boochvalter" working in conjunction with "Hapach" which is owned by the landlord, these form a contrast to the warm parquet on which they are placed and are easy for kids' access. The kitchen work isle was equipped with black bar chairs from "Pick-Up Bar Chairs", which give a didining solution around the isle.

"Ready-made" – it was decided that the "sawhorse table", which was purchased years ago by the owners,  would be placed in-front of the entrance door, which at first glance is exposed a decorative element that separates the inside and the outside. The outside table, made of oak rail ledges, is placed parallel to the sawhorse table. An old chest that was inherited from the grandmother was placed at the parent's bedroom, it was rebuilt and painted white in an oven by the artist and painter Osnat (054-4850258) and is used as the TV and storage chest. As well, an old library from the 50's, also inherited from the grandmother, was placed at the baby's room.

Textile and Art – a landscape picture (photographer: Sharon Eliasi) was hung perpendicular to the kitchen isle, which gives depth to the space and is an imaginary window to the outdoors and is perpendicular to an existing window which is facing the garden. The selected carpet for the living room is a Turkish patches one from Carmel Carpets, which defines the living space and provides color and texture into the white surrounding space. Paintings drawn by the artist Shiri Les are placed both in the entrance foyer and the dining room. A textile set from "Coolyco" store in the Basel site, was ordered for the baby girl's bedroom.

The interior design of the house was focused on natural materials and simplicity of design, which in turn, allows the home and its residents a constantly balanced felling between the outdoors and the indoors.