In 1941, at the height of World War II in Western Europe, the city of Aarhus, Denmark achieved an unusual architectural feat. It finished construction on a brand new city hall that was to be a beacon of democratic governance while the city lay under direct Nazi occupation. Designed four years earlier by the heralded duo of Arne Jacobsen and Erik Møller, the Rådhus survived the war and became an internationally recognized classic of Danish modernism.

Jacobsen and Møller’s winning design in the 1937 competition features three principal massing blocks, arranged asymmetrically in a small urban park (Rådhusparken) formerly used as a cemetery. At the entrance, a unit containing the main lobby, the ceremonial “marriage” hall, and the city council chambers greets visitors. At the far end against a side street is the smallest block, an “inquiries” wing, housed in an intimate but light-filled set of rooms beneath a gently curved roof. Spanning the distance between them is the more famous “panopticon” block, which contains the building’s administrative offices (more on this below).

From the outside, the building projects an aura of regimented order and economic simplicity. Its façade is organized by a grid system of squares and rectangles that are so geometrically pure as to appear anachronistically postmodern, an effect complimented by the varyingly pitched and curved copper roofs. It is constructed of concrete and steel, and the façade is veneered with copper details and 6,000 square meters of imported Norwegian marble.

Despite its seemingly eclectic combination of elements, the Rådhus can be properly categorized as a classic example of Scandinavian Modernism, a style characterized by the merging of natural, organic, and regional elements with a more internationally recognizable brand of modernism. While the Rådhus contains the hard lines, boxlike massing, and reinforced concrete construction that was becoming increasingly popular throughout Europe during its construction, it tempers these qualities with the inclusion of curves, light materials, and soft edges. This is particularly true in the interiors, where traditional craftsmanship and modern ornamentation create a warm and inviting environment that is deeply rooted in the tradition of Scandinavian design.

The entrance to the building serves as a threshold between these two opposing conditions. Visitors pass from the hard and austere condition of the building’s exterior into a lobby filled with extraordinary detailings and an organic material palette. On the floor, an intricate black-and-white Italian mosaic pushes up against a gently curved wooden bench. Behind it, a spectacular herringbone floor, made of age-darkened bog oak, pulls the visitors into an open ceremonial hall large enough to accommodate 600 people. A gently curving circular staircase to the lower level completes the natural effect of the space.

This entrance sequence leads visitors to the panopticon block, a primarily functionalist space that is nonetheless visually arresting. On either side of the hall, small administrative offices line the walls of a long and narrow corridor. A split through each of the aboveground floors creates a four-story atrium, lit by skylight and spanned by the occasional walkway. Its name, of course, comes from the block’s similarities to the famous panopticon jailhouse design by the philosopher Jeremy Bentham, though the warmth of the beech wood paneling and brass fixtures deter any further prison comparisons.

The extraordinary level of detail and craftsmanship throughout the building can be attributed to the amount of control Jacobsen and Møller retained over the entire design and construction process. Jacobsen, who achieved international fame primarily as a chair designer, collaborated with Hans Wegner to design nearly every piece of furniture that was placed in the building. Tiny details, such as doorknobs and light fixtures, were each custom-made for the Rådhus. For the informational signs placed outside and within the building, Jacobsen even designed a unique typeface for the city hall so that the shapes of the letters would match his desired overall aesthetic effect.

The famous clock tower, which has become the symbol of Aarhus, was actually added to the Rådhus only as an afterthought. In 1941, when the project was nearing completion, the city’s residents became alarmed upon suddenly realizing that their new city hall would not have a tower. Jacobsen and Møller initially defended their design, pointing out that the un-monumental simplicity of the building evoked the spirit of democracy and accessible government. Ironically, however, when the public clamoring for a clock tower reached a fervor, the design became democratic in process, too, and the architects acquiesced to the people’s demands.

What resulted was an elegant, 60 meter-high clock tower that plays upon a traditional form with a modern aesthetic. The architects invert standard construction practices by placing the structure and the floor slabs on the outside of the tower and showing the core of the building within, creating the distinctive appearance of scaffolding around an oversized chimney. They also place the enormous clock faces below the center of the tower rather than at the top in order to return the viewers’ focus to the governing spaces and to avoid giving the building an unwanted sense of monumentality.

For seventy-three years, the Rådhus has acted as the political and civic center of Aarhus. For the rest of the world, it has served as an inspirational work of architecture and a much-needed lesson in regionally-sensitive design. In 2006, the city hall was added to the Danish Culture Canon (Kulturkanonen) as a tribute to the quality and originality of the design and a testament to the contributions it has made to its city. 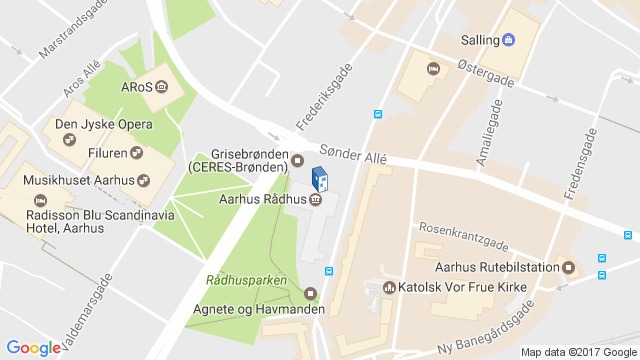 Location to be used only as a reference. It could indicate city/country but not exact address.
Share
Or
Copy
About this office
Arne Jacobsen and Erik Møller
Office
••• 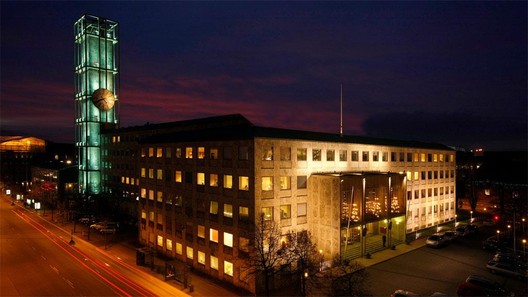