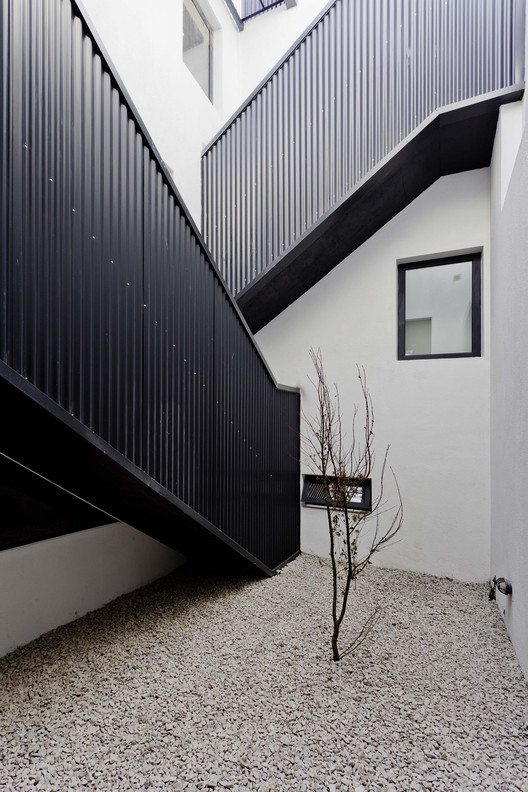 From the beginning this project had to respond to two different voices, or two clients. Both required the same amount of square meters for their future homes. It is perhaps the greatest achievement of this project, having understood how to complete the entire buildable volume equally for both owners, and without losing the ability to have access to almost all of the terrain.

The strategy chosen was to cross-distribute the meters that corresponded to each owner, so that both units rotate through the central axis of the patio in a centrifugal manner. To achieve the crossed connection of the two properties without wasting useful meters, we took the decision to "externalize" the stairs, like sleeve-bridges connecting both units.

The silhouette of the building is a result of the completion of the maximum buildable volume that the code of the city of Buenos Aires allows. One strategy for taking advantage of all the meters was maintaining two areas of the property formerly located, clearly manifested through its bricks vaults.

The new building also recalls the old spatial organization positioning itself on the old tracks of the previous house patios, adapting the old layout of the ground floor to the two new homes. Property a with ground floor and two levels has 4 rooms and property of equal height B has 5 rooms. Both properties are staggered so that terraces appear both in the front and in the back.

This strategy is to identify the wall as a foreign element of the structure. This operation is reflected in both facades, motivating the intention of conceiving a solid facade whose operations of openings is the subtraction, exposing the structure behind. These operations were completed by a system of fences and balconies whose folds and textures seek to manifest the light and a verticality throughout the development of both facades, achieving a balance of empty strips and large solid volume.

The inner patio that organizes circulations, has a traditional opening treatment, making the multidirectional stairs, the stars of this central space. The greatest achievement of this project was to adapt under the tracks of the old building, two houses whose volumetric ambition exceeded the capacity of the land and with a simple strategy of circulatory connections, we achieved to occupy the whole site for both two houses.