The component parts of Monditalia, the 41 projects that line the vast corridor of the Arsenale, provide contextualization for architecture operating within larger systems, be it politics, media, border control, religion, etc. When we spoke to Ippolito Pestellini Laparelli of AMO, Monditalia's head curator, he stressed that "the exhibition is a method, more than anything. This idea of the scanning through the country, selecting case studies, selecting another way to represent the case studies…it's a method that can be applied also elsewhere."

Monditalia mobilizes the other sectors of the Venice Biennale -- Cinema, Dance and Music -- in order to capture a "polyphonic" portrait of a European country with what Laparelli describes as "extreme conditions." Infographics produced in preparation for the exhibition demonstrate the statistical disparities between Italy and other nations. The scan of Italy begins from the south and continues to the north, allowing "different topics to collaps[e] or collid[e] onto each other, such as you would find when you travel through a real territory."

Monditalia's events have been programmed to take place between June and November in conjunction with a series of 21 Weekend Specials that allow further exploration of the issues/topics/case studies brought forth in the exhibition at large.

Watch Ippolito Pestellini Laparelli explain Monditalia in the video above, read on after the break for the curatorial statement, and see the rest of ArchDaily's Biennale coverage here. 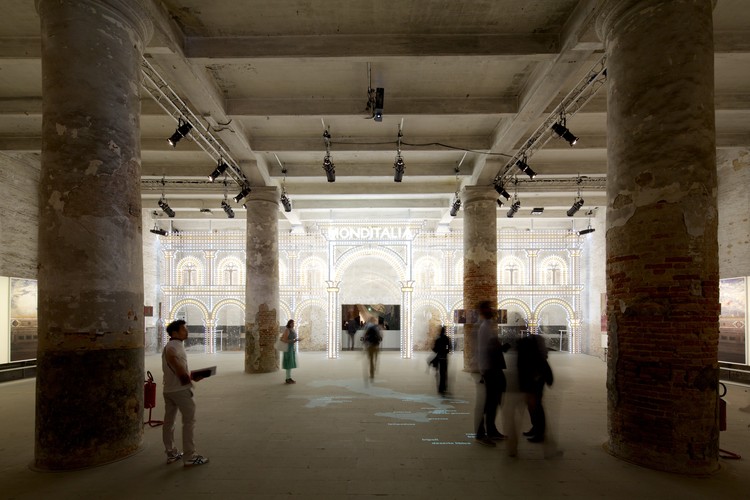 From the Official Catalog of the 14th International Architecture Exhibition. The physical presence of the Arsenale is interpreted as an ideal set. Rather than a sequence of individual episodes that typically do not connect to form a single narrative, we propose to dedicate the Arsenale to a single theme (Italy) and to mobilize other sectors of la Biennale di Venezia (Cinema, Dance, Music and Theater) to collectively contribute to a comprehensive portrait of the host country.

In a moment of crucial political transformation, we decided to look at Italy as a "fundamental" country, completely unique but sharing certain features--particularly the coexistence of immense riches, creativity, competences, and potential, combined with political turbulence--that make it a prototype of the current moment.

Monditalia conducts a scan of Italy. Along the Corderie, either-two Italian movies and forty-one architectural case studies, developed in collaboration with many young researchers, are arranged geographically from south to north--from northern Africa to the Alps. Cinema and architecture together offer a series of virtual sections at progressive latitudes, gathering and illustrating significant Italian subjects: history, architecture, politics, religion, technology, economics, industry and media, representing the complex Italian reality as a paradigm of local and global conditions.

Between June and November, throughout the Corderie, the Dance, Theater, and Music sectors will rehearse and perform in the same spaces, along with other that complement the permanent exhibition. Each production could leave a physical trace in the form of sets, objects, written material, projections, or the extended presence of "actors." A series of "stages," different in size, permeability and transformability, will accommodate lectures, debates, shows, workshops, performances, reenactments, turning the Corderie into a multidisciplinary work in progress, constantly evolving and on permanent display.

Together, these espies generate a portrait of the entire country as depicted by the Tabula Peutingeriana, a fifth-century map of Italy as the core of the Roman Empire that is still entirely relevant today…