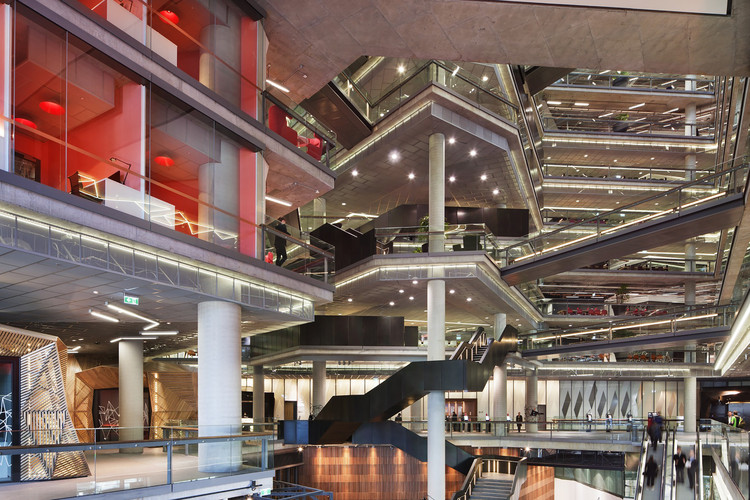 Text description provided by the architects. Located in Melbourne’s Docklands, 700 Bourke Street is a pivotal new workplace for National Australia Bank (NAB) with architecture, interior design and workplace consulting by Woods Bagot. The site location, between Southern Cross Station and Etihad Stadium, generates incredible footfall, while its position beside sunken train lines allows the entire west façade of the building to be visible from the city. For NAB, the site also had the advantage of being perfectly placed in between their existing workplaces at 500 and 800 Bourke Street.

Responding to its triangular site, the architecture embraces the triangle as its primary visual motif, with a magnificent triangular atrium rising through the centre of the building. One of the distinctive architectural signatures of the building arose as a way of breaking down the scale of the enormous footprint. Three vertical fissures snake their way down the façade of the building, cutting into the mass of the architecture, letting light into the deep floor plates and providing an orienting feature within. Triangulated façade panels on the exterior of these “cathedral windows” are coloured according to the amount of sunlight they receive, with a spectrum running from red, through to orange, yellow and green.

The point of entry to 700 Bourke Street is characteristic of the radical approach that NAB sought for the building. The main entry is for pedestrians, designed at a human scale, leading workers walking from Southern Cross Station and the city, while entry from the road is on the level beneath. This approach is reminiscent of Le Corbusier’s early experiments separating cars from people on different levels. From here, the ground floor is fully accessible to the public, with security managed on an upper level. This means that NAB customers have the ability to access and move through the building, using retail outlets, casual seating areas and cafes, as well as child care facilities and a mixed usage auditorium with its own democratic amphitheatre.

700 Bourke Street is the result of a long relationship between NAB and Woods Bagot, with this workplace providing NAB with an opportunity to affect organisational change and achieve business efficiencies. Woods Bagot’s design takes a real time working approach, using information-age mobility, virtual working and a focus on collaboration to inform the design of the working environment. Supporting physical and virtual synchronicity, parallel processes and collaboration rather than conventional sequential and predominantly individual work, the concept supports cross-silo teams that are highly focused on achieving goals in rapid time.

The total floor area of 63,000m2 is positioned around a central, light-filled atrium and divided into eight zones that act as hubs for 50 people, with the added flexibility of 100 drop-in staff, community and consultants. Each of these zones are subsequently sub-dividable into a series of spaces for social, shared, focused and learning environments.

From the street it is possible to see the entire atrium and, surrounding it, the whole organisation literally working together providing a sense of connection, transparency and community. On the upper level, a large roof garden provides another option as a work environment and is connected, via the atrium, all the way through to the ground floor internal street.

Many of the most innovative aspects of 700 Bourke Street came about as a result of a unique process of stakeholder engagement. A series of workshops, held early in the process, allowed a collaborative approach involving the Woods Bagot architectural team, NAB, Cbus Property, the master plan team and the Woods Bagot interior design team, replacing the more linear approach that is common in the design of a building of this scale. As a result, the building was able to form itself around the aspiration of the organisation, rather than the organisation needing to adapt around the constraints of the building. 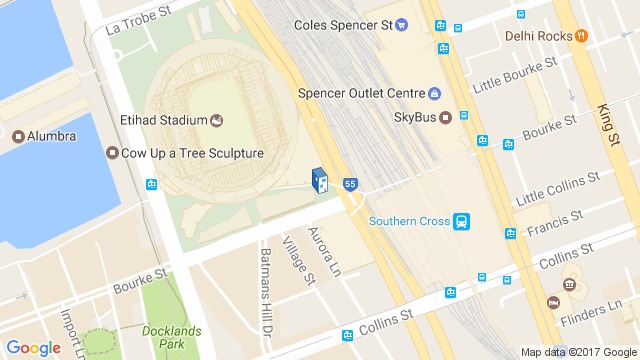