Save
Modernism in the Arab World: Bahrain's Pavilion at the Venice Biennale
Presented by:

In Bahrain's pavilion for the 2014 Venice Biennale, the country uses its position on the eastern edge of the pan-Arabic region to investigate modernity's impact on the Arab world: first as a colonial imposition, then as a local attempt to reconcile global and Arabic culture, then finally as an acceptance of neoliberal ideals.

The exhibition collects 100 projects from across the Arabic states, with the intention of consolidating and preserving knowledge of this critical period. The installation itself, a giant bookcase, is the manifestation of this research, and will later be made available at the Arab Center for Architecture. 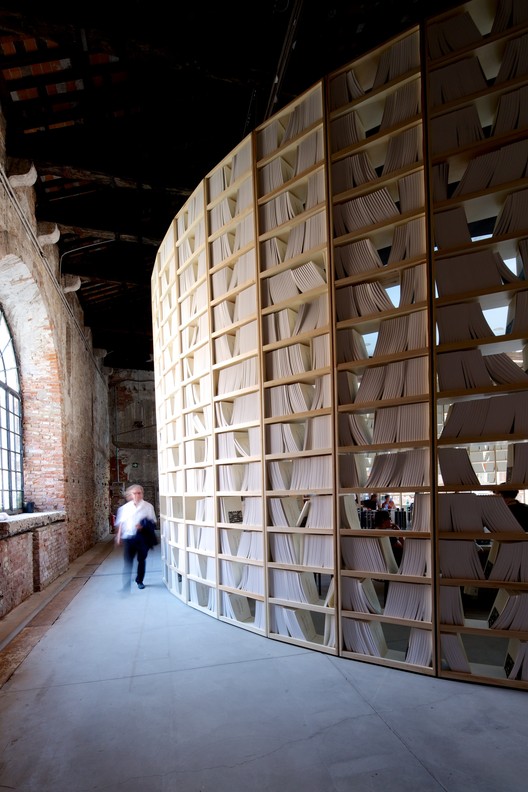 From the Official Catalog of the 14th International Architecture Exhibition. At a moment when the Arab world is in turmoil, it seems relevant, from Bahrain, the eastern edge of this region, to assess what remains of the pan-Arab project, a transnational political and cultural project born in the early twentieth century and coinciding with the birth of modernism in the region. Under the Ottoman rule that spread from Baghdad to Tiemcen in western Algeria, European colonial forces inscribed the beginning of a modernist project, first through an infrastructure of rail lines and then progressively, with the demise of the Ottoman Empire at the end of the first World War, with more pronounced colonial ambitions that were translated through a territorial project of modernization at both the urban and architectural level.

From the modernist master plans for Algiers to the Soviet influenced imports that were built in Damascus and the mud brick Art Deco architecture of Baghdad, the seeds of the modernist project arrived mostly from an outsider's perspective, and were commonly perceived as such. They were delayed for a brief period from the 1950s to the '70s by local attempts at a modernist architecture that attempted to reconcile local specificities of customs and materials with the the colonial innovations of the time. Arab architects were experimenting with a local modernist architecture that had the ambition of belonging to an international movement, yet was responding to context.

From the late 1980s onwards, the seeds of the modernist project were aborted as the political context evolved and the structural changes of the modernist project became difficult to come by. The colonial map was gradually replaced by the real estate developer's model as neoliberal ideals were loosely adopted and generally accepted as the new modus operandi, ushering a shift of the political and economic gravitas of the region from the Mashreq towards the Gulf Region.

The exhibition is conceived as a subjective, non exhaustive and sometimes fictional reading of the architectural legacy of the last hundred years across the Arab World, initiated as a first attempt to safeguard the archival architectural heritage of this region. It includes a selection of a hundred buildings, laid out flat without any prevention of qualitative architectural judgement that will join the archives of the Arab Center for Architecture.