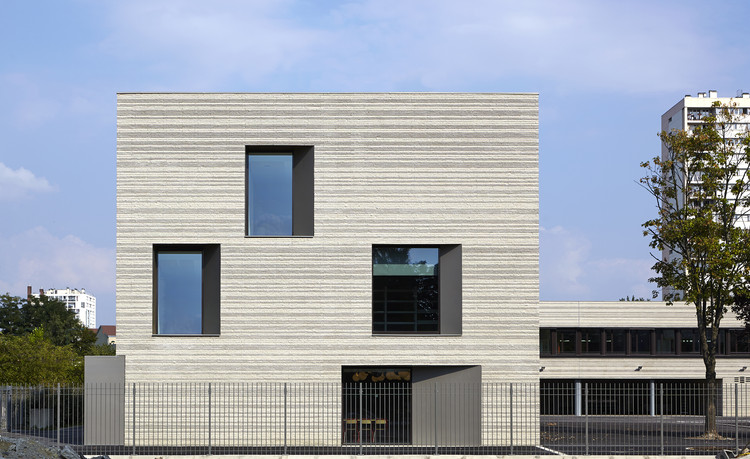 Text description provided by the architects. The project establishes a simple continuity with its surrounding context of urban renewal. Its construction completes a twofold environment whose variants are initiated on the site:

— The Built Setting: At the north and east ends, the proposed extension—a volume on the second storey—is delicately articulated by a clear break with the existing structure. It is in synch with the align¬ments initiated by the elementary school, and offers a noble facade towards the parkway which serves the institutions;

— The Wooded Setting: At the south and west ends, the wooded environment offers a peaceful and green landscape horizon for the educational facilities. The rich heritage of the flora and fauna is drawn upon, as well as the sceneries that are indigenous to the area (existing trees and the strip of wooded meadow at the south end, for example).

The project develops the idea of a strong association between the two parts of the building to form a coherent whole; it is a homogenous architectural framework that responds to the natural setting of the south and west sides. The simplicity of volumes in the existing building continues in the silhouette of the extension. An economical, compact and coherent project emerges.

Taking advantage of the intervention on the facades of the renovated building, we have suggested cladding the whole with a noble and durable material: modular panels of dyed concrete, which echo the warm expression of the original stone walls.

This envelope finalizes the association of the two volumes and defines a common implementation and vocabulary between the two parts of the programme. Such a simple federating expression expresses itself in a refined, functional way, according to the orientations:

— On the upper levels towards the courtyard, the classrooms have horizontal sliding windows which frame the openings towards the south and the west, from which the canopy and the edge of the woods can be seen.

— At ground level, the openings towards the south have deeper and larger proportions, matching the serving facilities (dining hall, reception centre), thus acting as an extension of the major opening formed in the existing building by the courtyard.

— Towards the parkway and the street, more limited openings are positioned in the background: large glazed windows form frames that highlight the walkways, the library and the IT room.

A Functional Organization Articulated with the Existing Structure

The plan to keep the access and the general layout of the premises in the renovated section has led us to adjust the connection of the extensions to the geometries of the existing structure.

Acting as the connecting element for the two variants, the sequence offered by the windowed gallery and the double height of the levels of the extension offers a series of locations with diverse lighting, points of view and relationships with the outside environment.

Thanks to the regular intervals of large frames that look out towards the green parkway and the courtyard, navigating within the school is a pleasant and invigorating experience.

The functional optimization of the whole provides for the establishment of different parts of the programme:

— At ground level, the main common premises as well as those which are destined to a more punctual use are all laid out around the covered and the open courtyards within the renovation and extension of the building. The two major recreational spaces of the covered courtyard and the dining hall thus communicate with the open courtyard through large openings.

— At the upper levels, the renovation and the extension are dedicated to the act of studying: the beautiful layout of the classrooms in the existing building is matched in the extension by the superimposition of two series of classrooms. At the first storey, the library and the IT room, easily accessed by all, are located at the bow of the building and open up to the city. A simple flight of stairs connects them to the reception centre.

As a result, the two buildings offer two different functional types according to their orientation. The renovated building is laid out on an east-west axis and its extremities are occupied by vertical distributions and a complement of annex facilities (toilets, storage). The classrooms are for their part still oriented toward the landscapes which border them from east to west.

As for the constructed building, it adopts in a north-south axis an organisation in two strips of matching width:

— The other is deeper, situated on the south end, next to the opening to the courtyard and its trees, and hosts the most dignified rooms (the classrooms and the library at the upper levels, the dining room and the reception centre at the ground level).

Finally, the courtyard and the recreational spaces are accessed by means of itineraries which vary according to the weather and the seasons: all the classes can either converge under the covered playground or follow different and more direct pathways to reach the open courtyard. 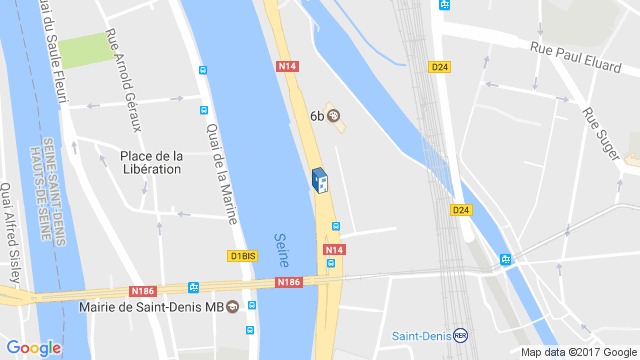