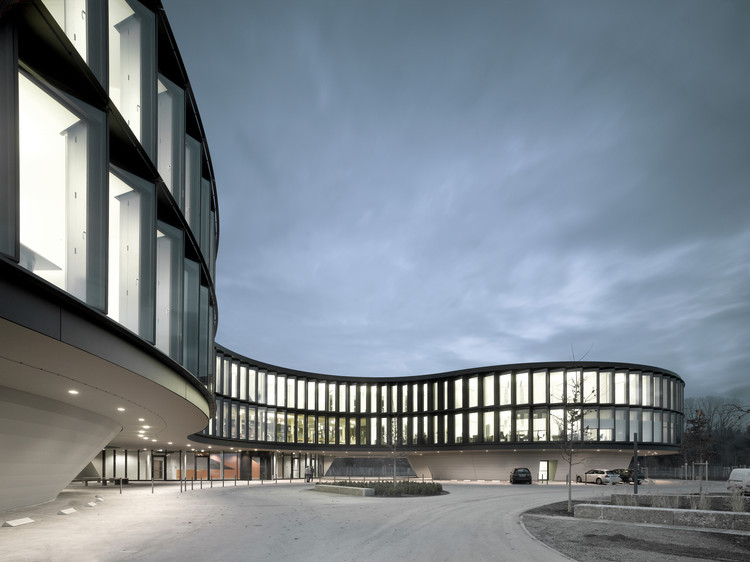 Text description provided by the architects. ESO, the European Organisation for Astronomical Research in the Southern Hemisphere, is the foremost intergovernmental astronomy organisation in Europe and the world's most productive astronomical observatory. ESO operates three sites in Chile — La Silla, Paranal and Chajnantor — on behalf of its fifteen member states. Together with its international partners, ESO built ALMA (Atacama Large Millimeter/submillimeter Array) and is presently designing the European Extremely Large Telescope (E-ELT).

The new annex marks an important moment in ESO’s history, as it brings the complete ESO staff in Garching together on one site, facilitating valuable collaboration, as well as providing a technical building for ESO’s most advanced instruments to be assembled, tested and upgraded. These two buildings — an office and conference building of 10.300 square metres and a technical building of 2.900 square meters — and their surroundings cover more than double the current area of the ESO Garching Headquarters.

The extension was designed to complement the original building (Architects: Fehling+Gogel). The office building, implementing a similar curved shape, boasting two inner courtyards, makes extensive use of natural light sources. The technical building is a cylinder construction with a diameter the size of the 39-metre primary mirror of the E-ELT.

Both new buildings have been labelled green buildings due to the significantly lower energy consumption typical for buildings of this size. This is achieved with the well-insulated facade and intense wall and slab insulation. The office building is heated and cooled through concrete core activation — using ground water, which is fed into with a heat pump. Additional heat energy is supplied with district heating utilizing geothermally heated water.

Existing situation and design objective: The existing ESO Headquarters building with its outstanding location on the southern fringe of the Garching Research Campus, lies at the starting point of the axis of the “Campusband”.

The building is renowned for its unique architectural design, which symbolizes the scientific study of the cosmos carried out at ESO. The building stands alone at the edge of Garching’s green belt, and its elegant curves express a successful symbiosis between landscape and architecture, embracing the natural surroundings and forming individual courtyard spaces. Keeping the character of the site and emphasising the communicative atmosphere in close touch with the surrounding countryside form the key features for this design concept.

The architectural concept for the extension buildings takes into account both the established green belt beyond the southern border of the research campus and the extrovert character of the existing headquarters building. The result is open and individual buildings that blend both functionally and formally with the existing headquarters, while still respecting its prime position with the main entrance, reception and public areas. Since the new office and conference building is located south of the existing headquarters and therefore reaches even further into the green belt, it was conceived as a structure embedded in its natural surroundings. In keeping with the majority of the existing building, the height of the new buildings does not exceed three storeys other than the two five-storey office rings towards the southeast.

The circle form is the dominating architectural component in the existing headquarters building. In this context it refers to scientific communication and this design element is overtaken and transformed into the extension building. While the existing building is composed of a series of open arcs opening out into the surrounding countryside, the new building forms a continuous band of convex and concave circles that enclose inner circulation zones, communication zones and public facilities such as the auditorium, council room and cafeteria.

The main entrance to the existing headquarters is via a ramp from the northwest at a height of about 4 metres above ground, meaning one enters the building through the first floor. The ground floor is mainly used for internal access and delivery. Therefore, the new building is conceived with its two main floors floating above ground level. These two main floors rest on structural and functional building elements, which contain the auditorium, delivery areas, covered bicycle and car parks. The basement is located below the auditorium complex. In order to avoid breaching the ground water level, the basement areas are reduced to the required minimum in order to avoid the risk of flooding and reduce waterproof concrete structures building costs.

The main entrance was retained in the existing headquarters building. The internal bridge connects the three buildings - the existing building with the office and technical extension buildings. Car access and the direct entrance to the extension building are provided via the access road to the parking spaces, northeast of the existing building. These are arranged in a ring form around the functional and structural parts of the building on the ground floor of the new office and conference building, covered by the first floor’s slab of the building. This entrance includes a taxi drop-off zone and a separate reception, which can also be used for major events such as congresses or seminars.

The auditorium, cafeteria and council room of the new building are situated in the area next to the existing building and thereby form the balance point of the new ESO site layout. Additional communication zones with reading areas are arranged on both upper floors around the two circular cutouts with views to the outside. One of these cutouts, with a diameter of 8.20 metres, has exactly the same dimensions as the large VLT mirrors at the Paranal Observatory in Chile (Auer Weber designed the Residencia at ESO’s Paranal Observatory, which was awarded the 2004 LEAF Award and the 2005 Cityscape Architectural Review Award).  Similar reference dimensions to other telescopes of the ESO fleet can be found throughout the buildings.  Offices (12 m2 standard size) are placed in the outer ring of the office building and have views to the countryside.  Larger 18 m2 offices, as well as the meeting rooms, are located in the two inner rings with views to the courtyards.

The planted areas between the existing building and the new office building are developed in accordance with the overall ESO site-landscaping concept. The new office building appears as a structure floating above the existing landscape, paved surfaces were kept to a minimum and green surfaces — lawn or grassland, were brought as close as possible to the new building. Paved paths for pedestrians and car access roads were made from asphalt with a ground surface. The planting of additional trees respects the character of the site where open fields meet densely wooded areas. Trees were planted in a few selected areas (e.g., in the entrance area) to determine visual sight lines rather than to obstruct the view of the surrounding countryside.

The first and second floors rest on a concrete base construction. Circularly arranged inclined concrete columns on the ground floor support the first floor slab. The base of the building is clad with plasterboard that forms sculpted spaces on the ground floor level following the lines of the layout of the building. A column based support structure on the first floor level and the circular floor slab combined with a shear wall construction used on the second floor, allow a wide column-free cantilever for the ground floor slab, thus enhancing the perception of a structure floating above ground level.

This structural system is balanced through a specifically developed tie-beam system on top of the roof slab which enables the cantilever of the lower slabs to, metaphorically, hang from the building’s roof slab.

The curved shape of the extension building with its fully glazed façade provides the illusion of a structure floating above ground on its inclined clad supports. During daylight the existing headquarters and the surrounding countryside are reflected as fractured images through the shingled-folded facade. In the evening when the building is lit from inside, the complete structure in its full height and width, it optically provides a band of light floating aboveground reaching towards the stars. This is enhanced with the dim illumination from the embedded down lights in the suspended ceiling of the ground floor. Then, for a brief moment, the building appears as a flying saucer ready to lift off. 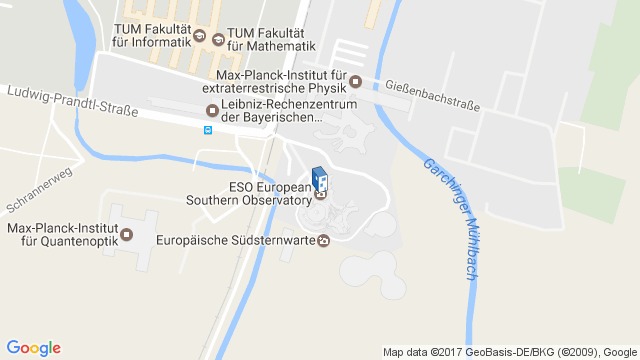