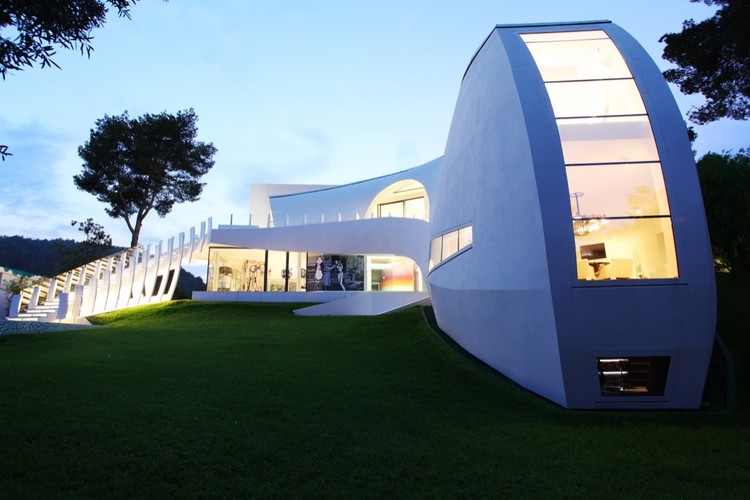 Text description provided by the architects. While Mallorca has long been a top destination for tourists in search of sun, beach, and great parties, today the Spanish island is about to garner some attention of a different kind. Cosmopolitan Estates, Ltd. (Cosmopolitan), a new real estate development company that plans and develops ultra-luxurious, high-design, state-of-the-art, sustainable residences and resorts throughout Europe and Asia, is proud to announce the completion of Casa Son Vida 1, a world-class modern luxury villa located near Palma in the exclusive Son Vida community. The first of six planned villas on the island, Casa Son Vida 1 is a hint of what is to come from Cosmopolitan. Standing as an expression of a new standard of progressive design that skews more futuristic than nostalgic, Casa Son Vida will capture the attention of the international design world with its sophistication and vitality, making Mallorca a new destination for those in search of design exploration and inspiration.

“While Mallorca is undeniably gorgeous, we felt there was a gap in the market,” explains Cosmopoli- tan president Michael Rimbeck. “Most real estate on the island is predictable or inevitably Mediterra- nean. We wanted to offer the increasing number of young, progressive, and adventurous buyers who are attracted to the island a more daring and evocative alternative. That is our ultimate goal, to create spaces that inspire and evoke. Casa Son Vida 1 does precisely that, and our future projects will only take it to the next level.”

As with all Cosmopolitan projects, a world-class network of architects and designers was assembled to complete the project. Los Angeles- and Switzerland-based tec architecture (tec), a global boutique design firm known for their own distinctive brand of architecture of the ‘third millenia,’ was commis- sioned to transform the villa from a run-of-the-mill quasi-Mediterranean structure into something all together different.

“Casa Son Vida 1 aims to redefine the notion of the luxury villa by moving most of the paradigms of luxury towards a more contemporary and forward-looking expression of architecture and technology,” explains Sebastian Knorr, tec co-founder and design director. “The project pushes the envelope in every direction and every sense; it is highly sustainable, basically off-the-grid, gives an unheard of sense of space and place, explores new construction technologies, and enters into a critical dialogue with the decorated box buildings in its vicinity. Casa Son Vida 1 is unavoidably exuberant and un- abashedly outrageous.”

Located approximately 15 minutes outside of Palma de Mallorca in an exclusive community called Son Vida, the eponymously named Casa is an example of design poetry in motion. The 8,500 square foot luxury residence transgresses the constraints of site and context, redefining luxury architecture as it is typified by the traditional and prolific Mediterranean and Tuscan styles otherwise found on the island. This act of defiance is accomplished by creating an entirely new structure that erupts unexpectedly from the walls of the existing Mediterranean home. The new structure evolves into a bold, curva- ceous shape that completely evades conventional definition. The idea is that the two pieces co-exist as separate entities, meeting abruptly and then quite literally turning away from each other. Their interaction suggests a chance encounter and speaks to the deliberate and bold juxtaposition of the two elements.The new structure could even be likened to a futuristic spacecraft that has quite literally landed on a typical Mallorcan villa.

Amsterdam-based Marcel Wanders Studio was tapped for the interior design, marking the first full residential project for the international design phenom. With his trademark wit and style, Wanders appoints the interiors with signature furnisthings and refined finishes. With a second villa just completed, two more about to break ground, and two more in development, Cosmopolitan is inspiring a design revolution on the island. Poised on the brink of a design renais- sance, Son Vida is on the way to establishing itself as an architecturally progressive community, put- ting Mallorca on the global design map for years to come. 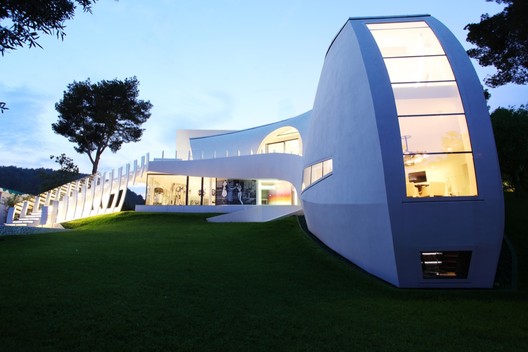