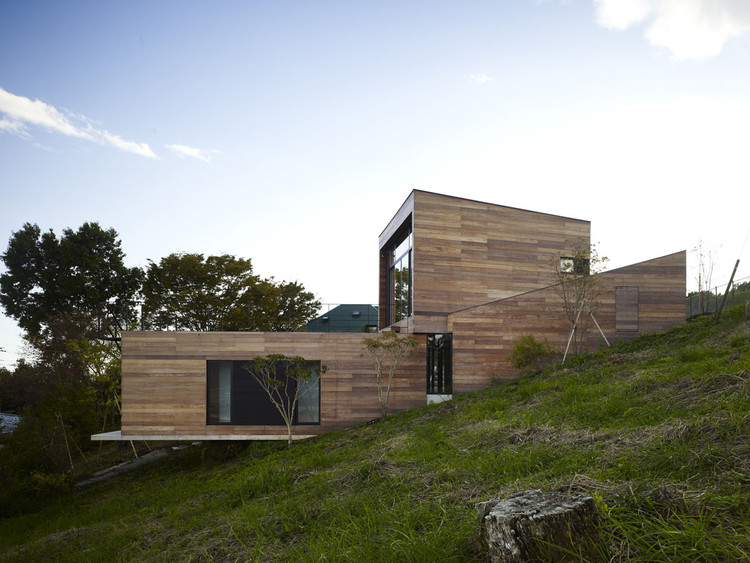 Text description provided by the architects. The site is located in Kanagawa Prefecture on a mountainside that overviews a sea and a city. The client couple, who are friends of mine, and I visited there, when the project was initiated. Walking around in the pre-project site, where too many tall trees stand on, views changed variously, because of the slanted land’s height differences. The experience was comparable to a pleasure of wandering in a forest. Taking a walk on a hillside or feel like so even inside the house had become a concept and we went on to continue the project, taking the slope positively.

Firstly, we started to define what kind of places should be there on the hill and then images of four living places were formed: a kitchen and a dining space near a road that becomes an approach, a living space at a good view point, bedrooms at positions to look out the hill, a bathroom at an airy location, and so on. After that, we put these places to individual volumes, converted them to wooden masses and shaped them, conforming to each site shape and condition, as if carving sculpture. The lateral of the road and the north surface are positioned parallel to the site boundaries, and the east surface, where the kitchen is, is slanted toward the south in order to let light in. The face of the living space is slightly inclined toward the north, so as to avoid seeing the neighborhood’s building. As a result, gradually overlapping each other, the four masses were formed into one shape.

After the outline of the building emerged, we proceeded to create the interior spaces. First of all, we produced a path that possesses comfortable straight eyesight, analogous to walking between trees. The path connects the inside and the outside, and again backs to the inside without a dead-end. A bridge becomes a part of the journey. On the finishes of the floors, various kinds of wooden floor that were chosen to match the assorted atmosphere are laid like carpets. In the center of a concrete floor that meets the ground, thin trees are arranged so as to look like a path between rice paddies.

We forwarded the design, piling up stories little by little, as if animals create their nest steadily. The traces of the thoughts and processes appear remarkably. In the interior of the building that was shaped to fit the landform, walls set in diverse angles, various ceiling heights and ten different floor levels exist and in the each space dissimilar shades live. The wind that enters inside the one-room interior space feels like they came between trees, and it feels like sitting on a natural stump, when sitting on a slight level difference. 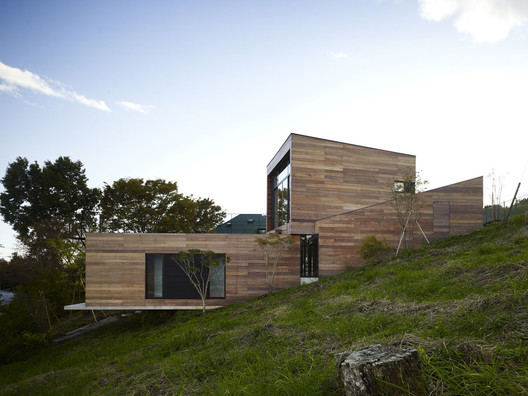