The common approach behind each mandate is to identify the specificities that characterize it and to extract its own single identity. These features are defined by environmental, functional or social aspects. Creating discrete buildings, with a clear architectural style, places of exchange, interactions within the existing elements, here are some key notions of the process adopted by group8.

A new visitor’s area and a shared restaurant at the International Committee of the Red Cross (ICRC) and the International Museum of the Red Cross and Red Crescent (MICR) accompany the old Carlton building, the historical ICRC headquarters. The museum and Carlton buildings constitute the leading symbols not only for the ICRC, but also for the international Geneva. Placed in relationship of the two historical buildings, the proposal does not only maintain these emblems, but also strengthens them with the new construction. The positioning of the pavilion restaurant, office spaces and conferences was conducted in a discreet manner so as not to compete with existing signals.

The program consists of two entities, on one side the restaurant located on the roof of the museum directly connected to the exterior square of the ICRC, on the other the Visitors’ Center with the offices, the conference rooms and a temporary exhibition space.

Hidden behind glass planes inserted into the hill side, the conference areas and offices occupy a plot of land with little value but also favor the positioning of the different programs while limiting the impact of the new constructions. The two semi-underground levels accommodate the Humanitarium consisting of three conference rooms with variable partitions. On the upper floor are the office spaces for the Museum.

Located within the pedestrian flow of the site, the restaurant is situated in a low volume with soft sinuous contours winding around an existing cedar tree. With its rounded volume and curved roof, the building is in perfect harmony with that of the Carlton.

Partially based on the reinforced slab museum, the restaurant consists of a single open space covered by a concrete slab. This structure is maintained by thin steel columns. The building ensures transparency through a large bay window, and allows unobstructed views over the lake, the ICRC site and the International Geneva.

The interior is composed of a dining room with its kitchen, toilets and corridors. The ceiling of the cafeteria is one of the notable features of the project, the curved shapes and parametric and non-hierarchical management invite you to interpret it as an "acoustic bas-relief". The raw concrete slab integrates all the technical elements as well as 11,000 acoustic cups of six different colors specially developed for this building.

The Humanitarium is an entirely concrete structure with walls and structural columns, consisting of a bearing slab for level conference rooms, and a compact ventilated double skin facade. The architects chose wooden flooring, false ceiling, interior painted walls and wooden slats. The design of the suspended ceiling shows the geography of the world, cut into strips, creating a topographical landscape that links the different spaces between them. Offices on the other are flexible spaces with suspended ceilings and interior painted walls.

As early as 2010, following a competition, group8 was commissioned by the ICRC to design the layout of their site. This "island of tranquility" is intended as a symbolic space with a resting area for ICRC delegates returning from the troubled and conflictual lands.

In order to best preserve the site with its existing environment of trees and gardens, the concept is to minimize the impact of the construction on the nature. The Pavilion restaurant was built around a tree, a true identity within the landscape. The perimeter of the restaurant is made of light gray asphalt to harmonize the exterior spaces of the ICRC. All the roofs and terraces were planted with typical Geneva meadow plants, giving a bucolic feeling to the entire site. 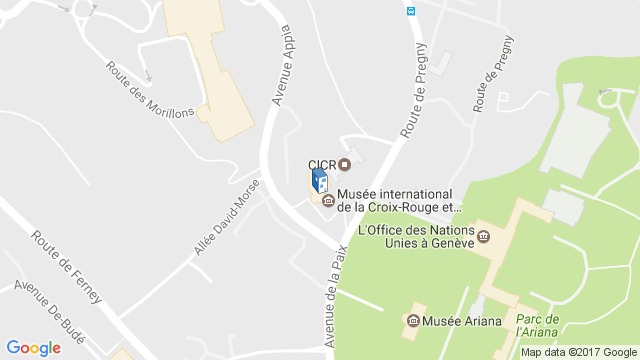