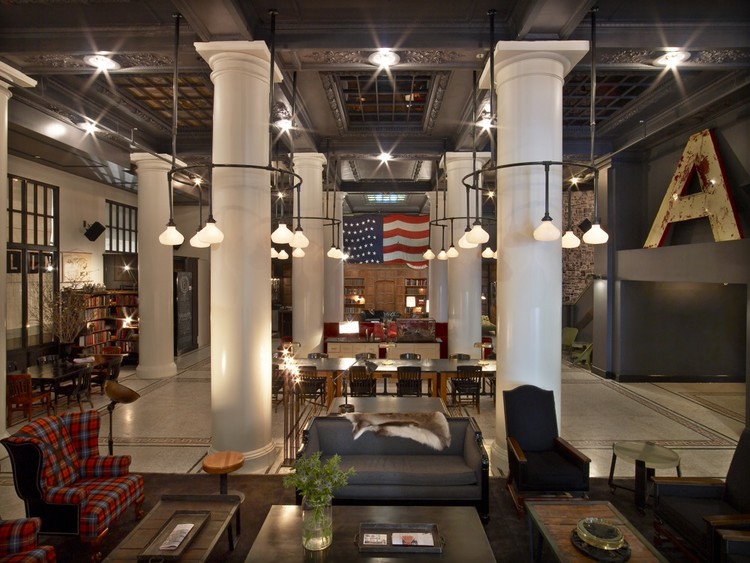 Text description provided by the architects. NY based practice Romand and Williams (ran by partners Robin Standefer and Stephen Alesch) specializes on interior design, working on several well known projects in the city, such as the Royalton Hotel, The Standard Hotel and The Standard Grill.

We now present you one of their latest projects, the Ace Hotel in New York:

Alfred Stieglitz and Edward Steichen were neighbors; ‘Diamond Jim’ Brady (the inspiration for Marlon Brando’s Guys & Dolls character) was a regular; visionary painter Harry Smith lived there. It was the Hotel Breslin then, and it is now the new Ace Hotel NYC.

Built in 1904 as part of what would become an avenue of hotels – electric signs spelling out Victoria, Hoffman, and Breslin gave this stretch of Broadway between 23rd and 29th Streets the famous moniker “the Great White Way” – the 344-room, 165,000-square-foot Hotel Breslin was one of the city’s best-known residential hotels in the early part of the 20th century, in a neighborhood known for its color.

This was the Times Square of the turn of the century, an area full of clubs and restaurants and New York’s first neighborhood to be electrified with lighting and signage. Tin Pan Alley, legendary home to even more legendary songwriters and music publishers like George M. Cohan and Irving Berlin was at the northern edge, and the surrounding blocks became home to factories and shops that made and sold everything from hats to chocolates to clothes by 1930.

Like the building’s history, the Ace Hotel is improvisational, a mix of materials and styles and historical periods and objects that comes together in layers. The hotel’s design takes its cues from the vibrancy of street life, the honesty of materials and the potential of invention. It is about soul, latent in the old architecture and re-introduced through the new design.

There is more than enough history and color to go around, and plenty of detail as well. The twelve-story hotel, built from brick and topped with a mansard roof, centers around a fantastically detailed lobby. Original coffered ceilings, plaster moldings, strong moldings, massive columns, airy skylights, and mosaic floors inlaid with a Greek key pattern, some of it obscured by layers of unsympathetic renovations, provide the bass notes.

Roman & Williams spotlights the former and fixes the latter, removing the falseness of an updated history and re-creating the aesthetic and historical stability that comes from the building’s great bones. The architecture itself is so strong, the original ethos so perfectly articulated, that the design decisions introduced by Roman & Williams are like the riffs on a chord progression. The firm is unconstrained by any attention to a particular time period or style; instead, the inspiration comes from a desire to create a space of intimacy and warmth.

The mélange of furnishings, objects, lighting and finishes reflects this sense of unconventionality and freedom. By layering pieces from several different periods, sources and original uses, Roman & Williams has created something that feels entirely new. A variety of vintage seating pieces with their original patinas – some recovered with modest industrial fabrics such as felt and wool and others recovered with more luxurious velvets – mixed with two massive sectional suede sofas (which give off a 70s vibe), custom designed by Roman & Williams, provides ample space for lounging and conversation. An 18-foot laboratory table with a slate top provides space for impromptu meetings, meals, and conversation. Custom-designed lighting fixtures, made of hand-blown glass gloves and industrial pipes, encircle the four massive columns in the lobby without permanently affecting the original columns. The firm used only existing junction boxes in the ceiling, so as not to disturb the original details that it restored. The lights use vintage lenses in a modern application to fit into the scheme. Reclaimed paneling around elevator has glossy black end caps to clearly distinguish them as new.

The “library” is defined by custom blackened steel shelving units (with a selection of books curated by Ace and Roman and Williams), a French bakery table, school chairs and English wing chairs. For the reception desk, Roman & Williams fused together three steel factory tables, covered the tops in leather, and retrofit them to hold all the computer equipment necessary for a contemporary hotel. A large vintage apothecary cabinet behind the desk provides storage.

For the lobby bar, Roman & Williams took an entire room, reclaimed from the library of a Park Avenue apartment, and installed it like a stage set in the lobby. This 25-by-10-foot space operates as a found object, as a celebrated artwork, and as a focal point. It isn’t a trick – the bracing that holds it up and the room’s section-like cut visible – but it represent the designers’ embrace of history, without the need to slavishly recreate it. Above the bar, huge 7-foot-high marquis letters spelling out ACE fill the space between the top of the found room and the 18-foot ceilings. Ace and Roman & Williams are commissioning an artist to paint a mural on top of and around these letters.

Where the lobby is layered and historical, playful and referential, the rooms are a little more efficient, but still like a funky small apartment. Custom-designed furnishings, such as a custom leather sofa that turns into a bed, and beds and desks of plywood and black and paint feel like mid-century wood prototypes, pieces created right at the cusp of something new, parts of the invention of a whole new style; an exposed rack made out of bent plumbing pipes and with hanging steel boxes replaces a closet and plays the part of historical reminder, a reference to the neighborhood’s industrial history.

Pipes also appear in the bath accessories and the desk legs showing how stock materials can be re-appropriated to make something elegant but simple, unfussy and ultimately anti-design. For the rooms of the Ace Hotel NYC, Roman and Williams custom designed the open closet, desk, and a line of bath accessories and fashioned them of an unexpected material: powder-coated steel pipes. The use of this highly utilitarian material reflects the sense of honesty and simplicity that underlies the design of the hotel and also speaks to an area of interest and exploration in the oeuvre of Roman and Williams – finding beauty in durable, basic materials and using them in new ways. For each of the pieces, Roman and Williams utilized a wide variety of diameters of pipe to make the creations. The closet uses a combination of materials: various pipes configured almost like an industrial rolling rack, with steel cubbies customized with the same black finish and with peg board behind to give a sense of finish.

Music comes from an LP-playing turntable, and a deep-fryer basket is mounted under the desk to hold the records. A full-size Smeg refrigerator, with its vintage profile, holds the “maxibar.”

Chalkboard paint on the walls and paintings by young artists individualize each room. 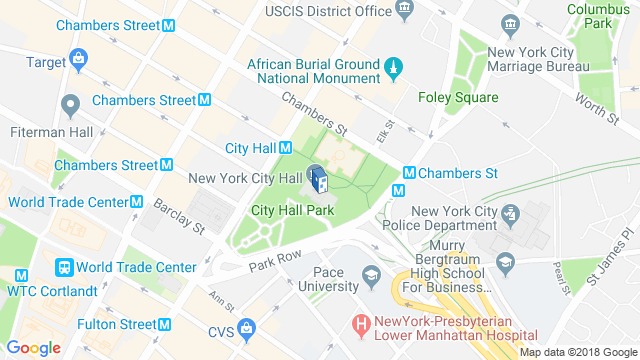 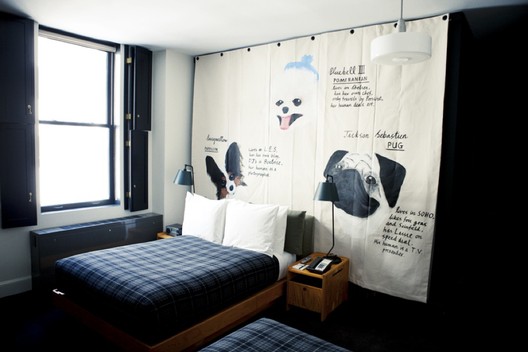