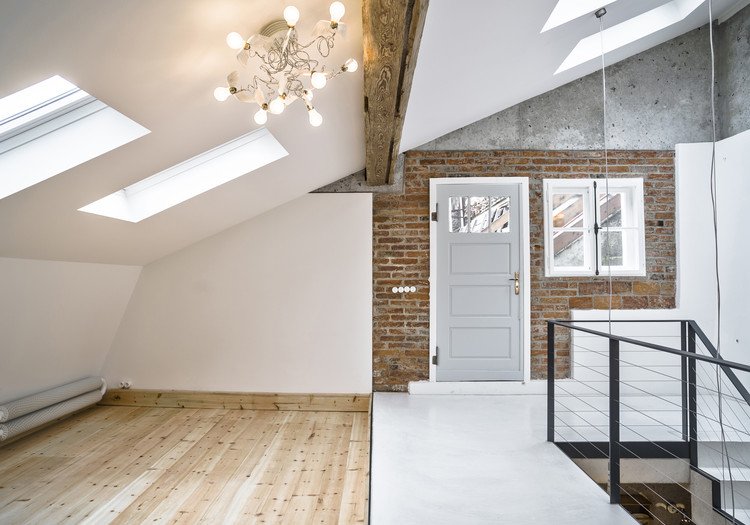 Text description provided by the architects. At the foot of the Nockherberg, within the southern Munich suburb 'Südlichen Au', there are only a few, still intact examples of the so called 'Herbergshäusl' (workman’s cottages) which used to be so typical of this area.

They were built along the steep, former bank of the river Isa, presenting themselves to the street in many different forms and colours. Steep narrow stairs lead up the hill giving access to their - mostly provisional – rear buildings which have been altered over the years depending on the changing uses people had for them. As one climbs even higher over countless irregular concrete steps, one will be rewarded with lush green garden terraces, chirping birds and distant views towards Munich’s city centre.

The NOCKI is one of these back houses within this rare, unique, patch worked, heritage listed building ensemble.

Having been built in 1890 as a timber workshop it has since then been transformed into living quarters. Over time it has been reused and extended, until, after a fire in the mid 90s, it was abandoned as an empty ruin, full of history.

This very old tradition of the patchworked 'Herbergshäusl' shall be continued. The building fabric of the ruin had been heavily damaged making it quite difficult to appreciate its intrinsic beauty. But the more than 100 year old elements of the building didn't leave any doubt – as much as possible had to be saved!

A sculpture made of insulating exposed concrete is interwoven into the ruin. It expands the building by carving one room into the hillside thereby opening the two formally separate apartments to light, air and the occupants. The concrete sculpture replaces, where it was not possible to preserve, fills found gaps and lines the existing walls with a circular ring wall. The sculpture holds all technical installations, necessary to contemporary living. Therefore it is not just the structural, but also the technical backbone of the house.

The new roof is a worthy replacement of the old one paying homage to its historic predecessor as a handcrafted standing seam metal roof. The typical elongated skylights are scattered in a multitude over the roof surface. In order to get direct sunlight and good ventilation in every corner of the house they are strategically placed, counteracting the almost north facing hillside situation and the density of the historic building ensemble.

Through the implementation of this interwoven concrete sculpture the ruin has been brought back to life. The interplay between Old and New is not only visible in form but also tangible in function and the use of space. The contrast lends character to the New and comfort to the Old. And so they melt, despite the hard clash, into a symbiotic whole.

This Project does not want to preserve the historical building fabric just for the sake of it.

The focus lies more on preserving and allowing the beauty of the original building to be daily experienced whilst enjoying all the advantages of modern living. The parameters, which the existing building dictated, are legible in the inner spatial tension and the particular characteristic of the NOCKI. Under the conscious direction of the architect old and new are being intertwined to create something completely new – without losing its history.

To work with the existing structures has given us a chance to rethink standards and automatisms which seem to have crept in to design, especially of contemporary housing. If one is sensitised for what is already there, makes use of it and is ready to take on unconventional compromises, one inevitably creates something completely new.

To minimize the building waste is one thing. To be able to preserve precious historical traces another. But, above all, it is the sensual value of the existing which survives, the uniqueness of its history, the patina of time and the possibility of experiencing its character, that remain.