Save
"Inhabiting the Desert" Since 1914: Morocco at the 2014 Venice Biennale
Share
Or
Copy

In Living the City, projections present key projects from each decade of the Biennale’s focus, from 1914-2014, showing them at their time of conclusion and how they look today. This includes iconic projects such as the Nid d’Abeille and Sémiramis buildings in Casablanca (1954) by Atbat-Afrique (Georges Candilis, Shadrach Woods, and Vladimir Bodianski). These are unique examples of modern architecture acclimating to local site conditions.

To open a window to the future, the curators invited a group of six young firms, plus two chosen through a competition, to design housing projects for the Sahara desert under the title Inhabiting the Desert.

We had the chance to talk with the architects from BAO + Ultra Architettura about their proposal In Sertum, a giant 1km triangle with thick habitable walls that enclose an untouched portion of the desert. A 1:100 section carved in marble represents this project over the Sahara sands of the pavilion.

Fundamenta(lism)s
Entitled Fundamental(ism)s in an allusion to the general theme proposed by Rem Koolhaas, the Pavilion of Morocco explores the radical and experimental approaches inspired by the region. In addition to having welcomed the work of international architects, Morocco has above all been a land of exploration, a veritable laboratory for the modern project. Morocco encouraged unique architectural experiments (constructive and material, formal and architectonic, but also domestic and social) that tangibly contributed to the history of architecture. While the country’s very specific historical conditions fostered this development, the Moroccan genius has also consisted in the ability to absorb, digest, and ultimately metabolize the modern project. Perhaps this, too, is part of the Moroccan tradition — a tradition of modernity and radicality, but also of appropriation and integration.

To narrate this adventure, the Pavilion of Morocco proposes an exhibition that focuses on the fundamental question of habitation and juxtaposes a historical trajectory of urban housing with contemporary speculations on inhabitable structures in the desert.

To illustrate this historical trajectory, the Pavilion of Morocco highlights one building or complex per decade for the period covered by the Biennale (1914-2014), with the exception of the hiatus of the Second World War (1944). The trajectory terminates in 1984, the year in which the late King Hassan II’s speech at the School of Architecture on January 14th, 1986 laid out the parameters for more traditional architectural development, a shift that fundamentally changed the nature of the architectural scene in Morocco. 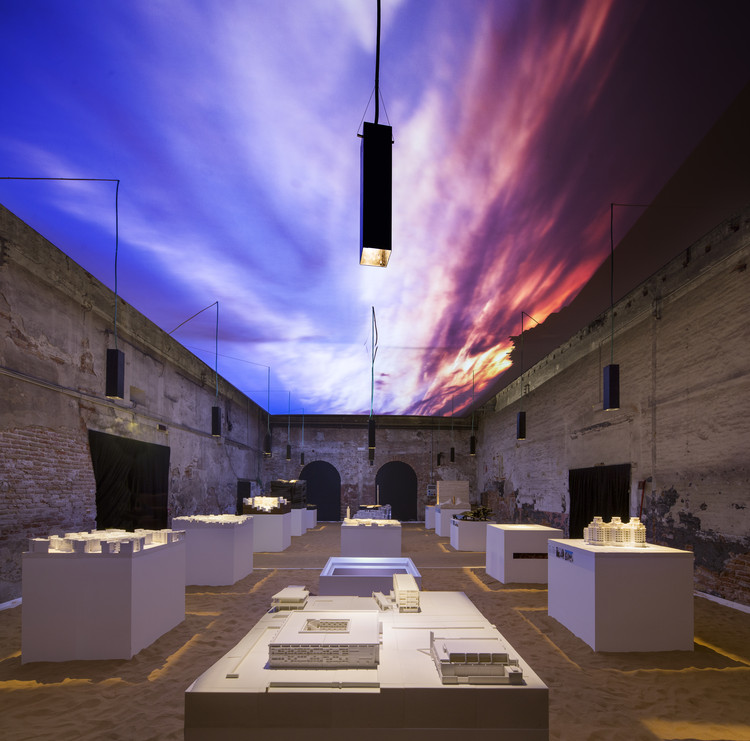 Inhabiting the Desert
Absent from the architectural discourse in Morocco, the Sahara, with its extreme geography and harsh climactic conditions, remains an unexplored territory for architectural speculation. Reintegrated into the national territory in 1975, the Sahara remains a far-flung, contested area in the eyes of the rest of the world. The unique geography of the Moroccan Sahara and its position as a territory at the “limits”, in a climactic, social, and political sense, demands that architects question how to integrate architectural and infrastructural solutions into such a marginalized territory. In addition to inviting six architects to participate in the pavilion, FADA launched an open competition in Morocco to encourage new talents to emerge. The two co-winners of this competition will also participate in this year’s exhibition.

Participating firms at Inhabiting the Desert:

In Sertum (BAO + Ultra Architettura)
The word “desert” derives from the Latin word “desertum”, composed of the particle “de” that assigns a negative sense to the verb “serere”, that means to connect, to tie, stating an entity that doesn’t have a connection point, empty, uninhabited. The triangular shape’s iconicity, which recalls strength and stability’s characteristic in relation to the desert’s power, performs a landmark’s function and, at the same time, denies itself letting disclose an unexpected feature. It’s an enclosure that embraces the desert, allowing it to permeate itself and to be modified by it, the depth of which becomes space of life. Everything in a landscape, as well as in everything in life, is based on change, on relativity, and on the passing of time. It is a monument to the sky and to the sun, evocation of the passing of the seasons and time.