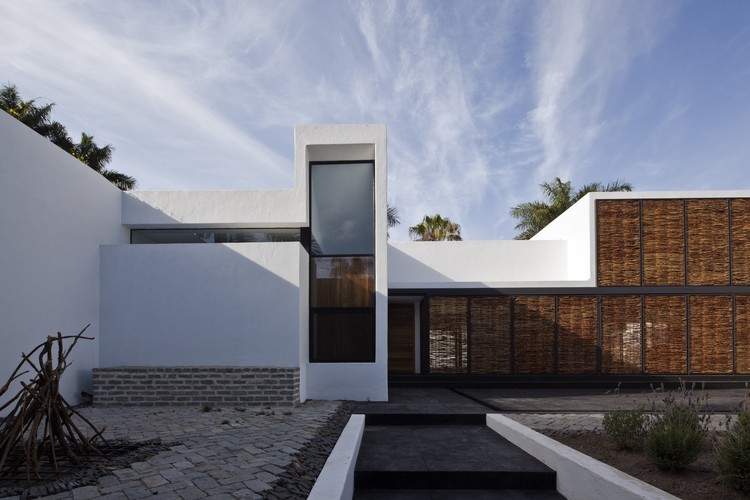 Text description provided by the architects. Building a house for an urban geographer and expert on architecture and the city meant for us the opportunity to experiment with a certain way of approaching the architecture project. The site is located in La Floresta, a neighborhood from the mid-twentieth century built in the manner of a garden city next to Lake Chapala in Jalisco, which since long ago has been a retreat for many foreigners because of the mild climate. This neighborhood has two main features: the urban space is of great value because of the section of its streets and its interaction with the surrounding landscape - mountain and lake - and also because of the vegetation; however the architecture that has been built there is irrelevant since it has been made ​​from purely stylistic re-interpretations of the local tradition. Thus we proposed a project that was able to relate deeply with its natural and cultural environment even without direct views of Lake Chapala.

Is it possible for an architecture to evoke the formality of its landscape?

Lake Chapala is a site formed by volcanic activity thousands of years ago. The surrounding mountains emerged segmenting an existing fjord leading to the formation of the lake. That is why it is possible to observe a series of lakes and lagoons from Chapala to the Pacific Ocean in the direction of Colima. The great weather that occurs there is related to the reservoir and its ability to produce lush vegetation. During the rainy season it is possible to see how the water comes from underground to the surface, which shows the underground and surface runoff that happen all the time in the direction of the lake.

The idea of our project is to build a home that is able to evoke this natural cycle of the site and serves its privileged climate and landscape.

This is why the roofs of the house have the ability to collect rainwater and lead it down to the pavement of the reflecting pool in front of the house. Thus, during the rainy season the rainwater is displayed in the house emerging from the exterior ground as it does in the surrounding landscape. To complete this "territorial construction", we place a large planter next to the reflecting pool: a lush forest which together with the rear gardens surround the interior of the house with greenery.

The design of the house comprises the day area taking advantage of the north-south sunlight, and is setback from the front of the site so that a front enclosure occurs. The volume containing the rooms is placed perpendicular to the previous, so as to avail the best sunlight as well, but stands at the western boundary to avoid the afternoon sun. The last piece of the project is the studio that is perpendicular over the public area, producing a space in section with the dining area.

The cantilever placement of the studio produces a terrace underneath that has the ability to cast a powerful shadow, ensuring a cool climate for that area at the back of ​​the site. The final idea is to understand the project beyond a home with a garden, it is a garden with a house. The aim was to produce a space surrounded by greenery, with the interior determined by light filtered through the structural gaps of the roof: a series of concave beams that capture rainwater and light between them to produce a ever-changing space.

As an anchor to the culture of the place we designed two elements. For the entire southern facade of the day area, a lattice woven with the branches of a tree called Palo Dulce. The lattice reduces solar radiation and produces a particular atmosphere inside, it also has the ability to fold to manipulate the degree of intimacy of said interior space. The lattice was woven by a fisherman from the area; it accounts for craft knowledge still found in the region. The second element is the stone wall surrounding the front enclosure of the house. It was done by a mason from the area and reminds one of the pavements found in Mescala; an island on the lake that has witnessed countless stories from pre-Columbian times.