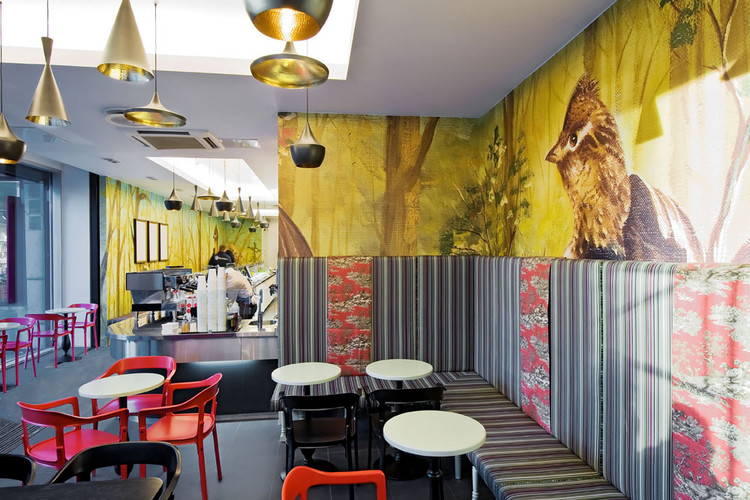 Text description provided by the architects. BIT-chain has been well known for a long time in Oslo for their delicious sandwiches and calzone, as well as for a cool industrial open kitchen interior design that the owner did himself. But during the past year, BIT decided that they want a new identity that would be more friendly and welcoming. Together with an advertisement company Dinamo we developed a modern version of the classic European bistro. We had a focus on English and French bistros and tried to make a new fusion version for Oslo’s inhabitants- Norwegian bistro. All items of graphical profiling, furniture and details are built under this concept.

Before BIT moved to Bogstadveien, a bookstore Norli had a cafe place at the same location. The existing ceiling and lighting were kept, but the lighting concept was upgraded with the brass lamps of British designer Tom Dixon. To create a homelike atmosphere, we designed two large couches - one with a high back so that people can sit for a long time, and another one without back - for people just waiting for the food they have ordered. This sofas were made by the local producer Buskerud Trevare AS.

To emphasize British influence we chose the textiles of the British designer Paul Smith for sofas. The employees, who work at BIT,are an important part of the new visual concept and for them we oredered the aprons of the same fabric as the sofas. Paul Smith was a great inspiration for the interior, therefore colors that have been chosen for interior - red, dark gray, light green, black are selected by studying his fabrics.

In the kitchen we are using classic French bistro tiles, while the walls in the customer area is covered with photo wallpapers with a painting of a hunting picture.The original of the picture “Ruffnecked Grouse” ( Oil on canvas, size: 24x36 inches, 1971 ) by Peter Darro was bought by the BIT owner at RoGalleery NYC/ 2009. This painting is used for the packaging design as well. 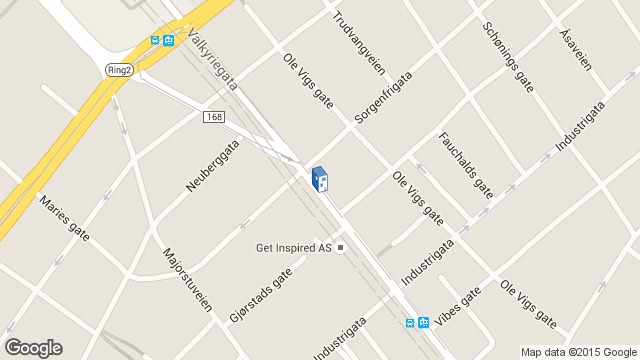 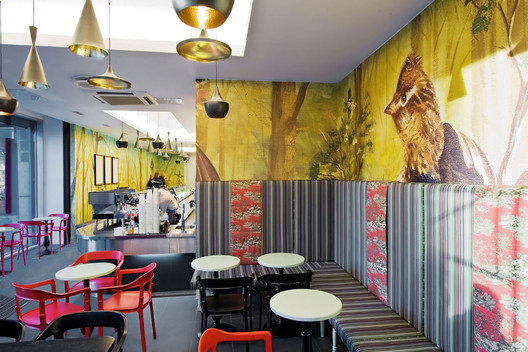