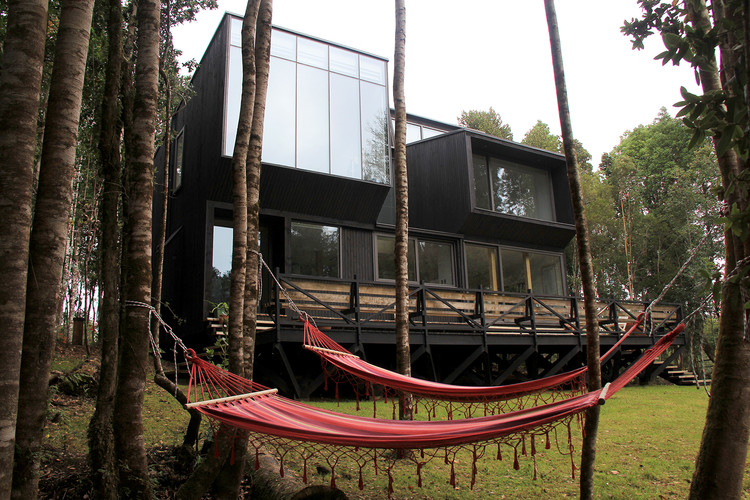 Text description provided by the architects. The main challenge of the comission was to develop a housing solution both capable of optimizing thermal criteria, and to visually maximize the strata - vertical and horizontal - of the surroundings.

Located in an area of abundant vegetation, near the Minte bridge in Puerto Varas, the 5.000sqm site presented the best type of soil to set up base in a topographically irregular sector, with 15 % slope , a low density of vegetation and the highest levels of natural lighting.

1. Thermal optimization through programmatic compaction on three levels.
2. Maximization of the natural lighting coefficient, through wide openings to the north, and bounded ones able to <frame the context> in the other three directions.
3. Dilation towards the topographic natural level, allowing better adaptability to the terrain, minimizing earthworks, moisture transmission, and unnecessary logging of existing trees.

-The project is developed using a three-dimensional matrix of 1.5x1.5mts. , through which spatial, structural, material and construction criteria are established .
-The resulting volume is defined mainly by the manipulation and combination of programme modules in three levels, which reflect the high amounts of rainfall of the region in its geometry.
-The programme is approached as a sequence from the most public at the first level (one space), to the more private on the second level (two units), and a bureau-hatch on the third level .

By means of a stereometric 5x5 " wooden structure founded on concrete handcrafted benches, the project lays on the topography, absorbing in its own structure the irregularities  of the bearing surface .

Morphologically it seeks to replicate strategies used in the XVIII century towers of the Osorno region, mainly by using a wooden structure in its entirety, a mono-material surface, a compact programmatic distribution, and the use of sloped roofs to drain rain water. 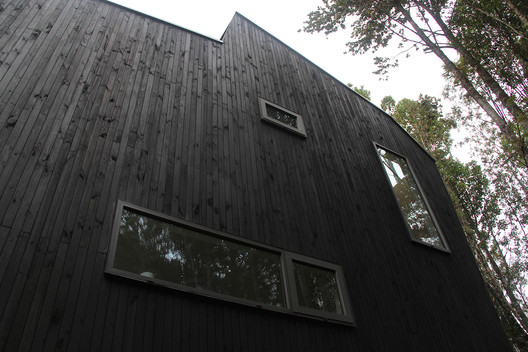