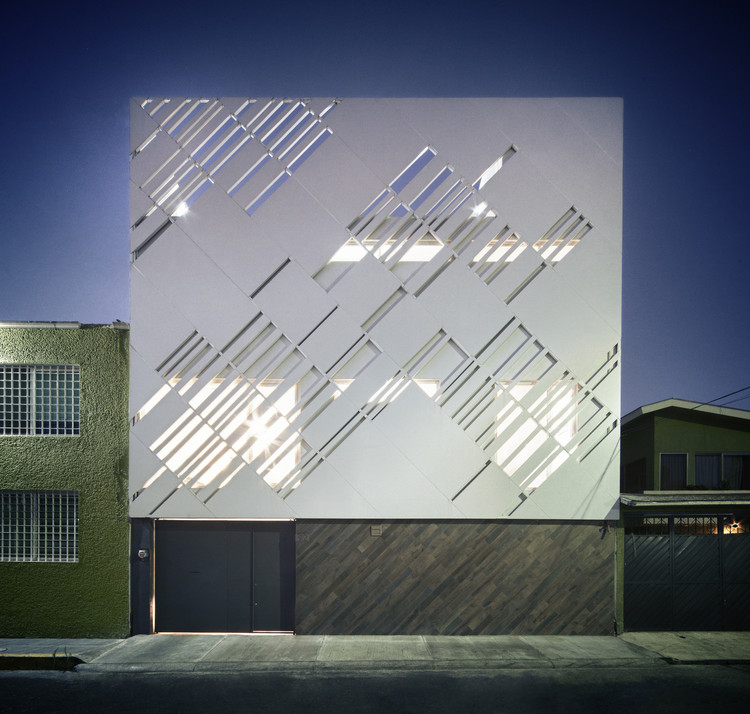 Text description provided by the architects. The original 1989 building is located at the front of the field , with north-south orientation , in its existing state this house had a couple of abandoned commercial premises on the ground floor and an unfortunate distribution in the rest of it, this led us to propose the new relocation of the program in 90% of the house, we close the spaces to the street winning privacy and open them to the green area of the back of the field , so we can incentivize communication with this forgotten area.

The design of this home remodeling develops from two premises, the first one: to produce the space flow through the dense prebuilt mass with specific demolition of some slabs and then create a triple height , the second one: redirect life house to the rear of the ground through the construction of a terrace that serves as a transition space.

The first major decision was to remove all existing excess elements to generate a volumetric value to the original construction, at the front we managed to rescue the mega box purity with an ACM panel facade that boasts a design based on a rectangular holes pattern that multiplies itself as needed visibility , lighting and ventilation inside the house , this double facade also generates thermal and acoustic insulation properties that make the project more sustainable.

The elevated terrace on the back of the house is in harmony with the original volume which consists of a series of high walls rotated 45 degrees, so in that hand this volumetric addition copies and shimmers these breaks generating a crystal crack between the terrace and the house, the other side of the terrace is entirely orthogonal to virtually complete the mega box. The ground floor and the first level - both public areas- not only bind up by stairs but also by a ramp that goes from the back garden to the new terrace which allows full access to wheelchairs, people with disabilities and seniors.

The second level -private areas- contains the bedrooms which were turned around to privilege them with views towards the green back yard. Finally the roof becomes a second terrace where the main protagonist is the sculptural domed structure in the middle of it. All serroteado coated finish was demolished and replaced by a simple flattened cement finish that helps to delineate the whimsical forms of the original construction.