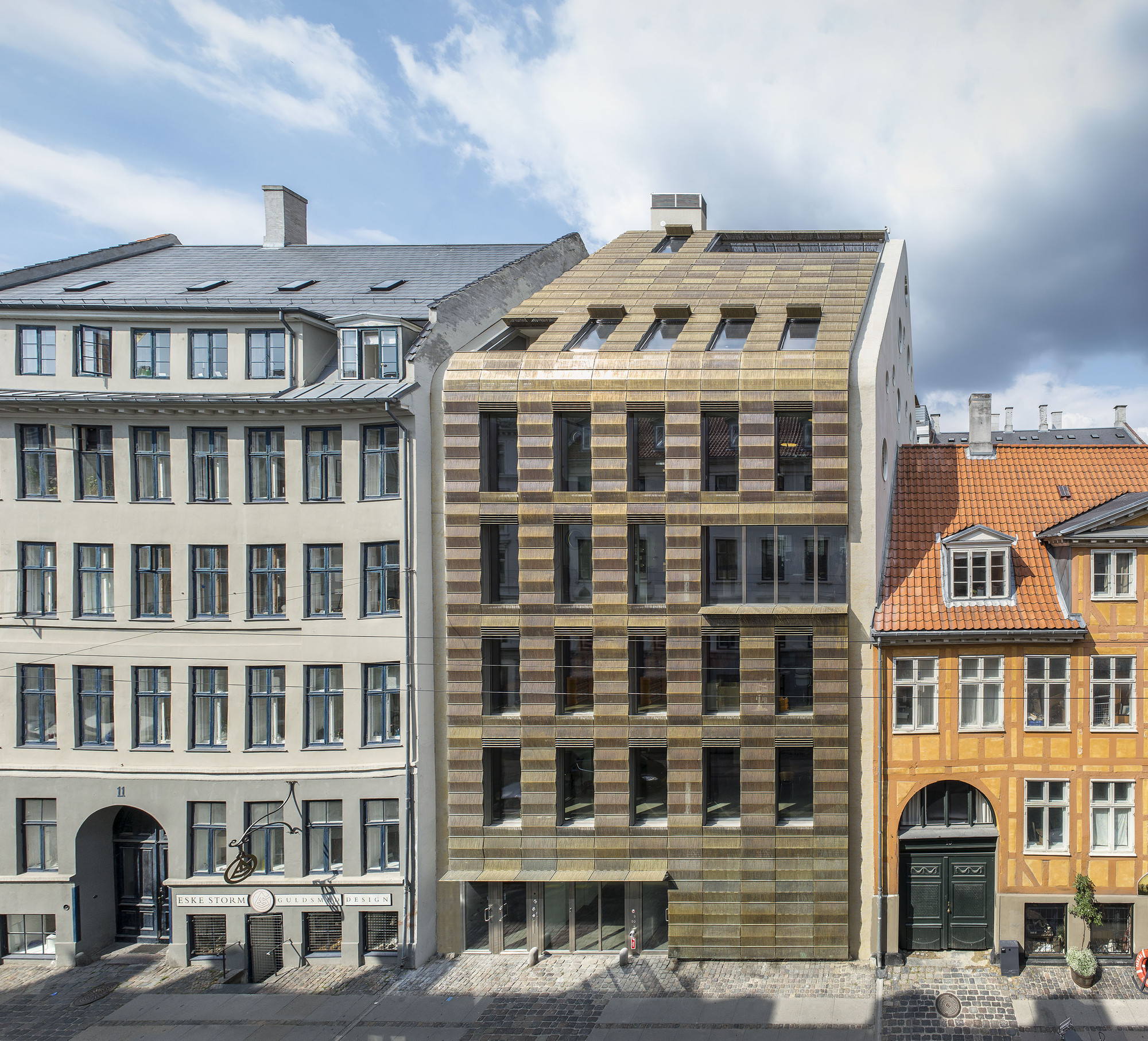 Text description provided by the architects. BBP Arkitekter have converted an office building dating from 1964 in the center of Copenhagen into the new headquarters for the danish jewellery firm Trollbeads, who are known for their glass and gold beads.

It is a high security building, organised like the old Venetian merchant houses with goods loaded safely at the ground floor, stock and offices above, and, at the highest level, a residence for the owner with a roof terrace.

The challenge was to make a building, which respects its type as a curtain wall building, while at the same time relating to the historic houses on either side. How do you combine a modern glass house with a

The original curtain wall was removed, the existing concrete structure stripped and extended 2.5 m toward the street, and a new skin of glass and brass covers the facade, the roof and a small courtyard at the back.

The building consists of two party walls, which have been raised and reshaped so as to follow the line of the neighbouring mansard roof. As is typical for visible party walls in the city, the exposed wall has a different logic than the facade, with small, round windows placed in a random pattern.

Between the two rounded party walls, a skin of glass is stretched to cover the roof and facade. On the outside a brass curtain is hung, making a kind of inverted curtain wall.

The brass curtain has three functions:

1.       Every morning half of the curtain opens, so the building emulates the historic houses next to it, with repeating windows in a massive wall.

2.       After working hours the curtain closes automatically, and the building is transformed into a burglar-proof vault.

3.       After dark a dim light turns on inside, revealing a modern glass house behind a veil of translucent brass.

The building’s windows are fixed, but behind each of the “masonry” pillars there is a glass door, which can be opened for ventilation.

The typical 1960s office building has been transformed into a golden jewellery box, which becomes a glass chest at night.

The brass curtain is lifted permanently at the entrance, forming a canopy which aligns with the lowest cornice on the grey house next door.

At the third floor the brass curtain is folded down, in line with the roof cornice of the yellow house.

When the curtain is closed, the only visible difference between its fixed and movable parts is the hinge.

The pattern which is carved into the brass curtain takes inspiration from a hedge of thorns guarding a treasure, and was developed by textile designer Lene Toni Kjeld together with architect Ebbe Wæhrens.