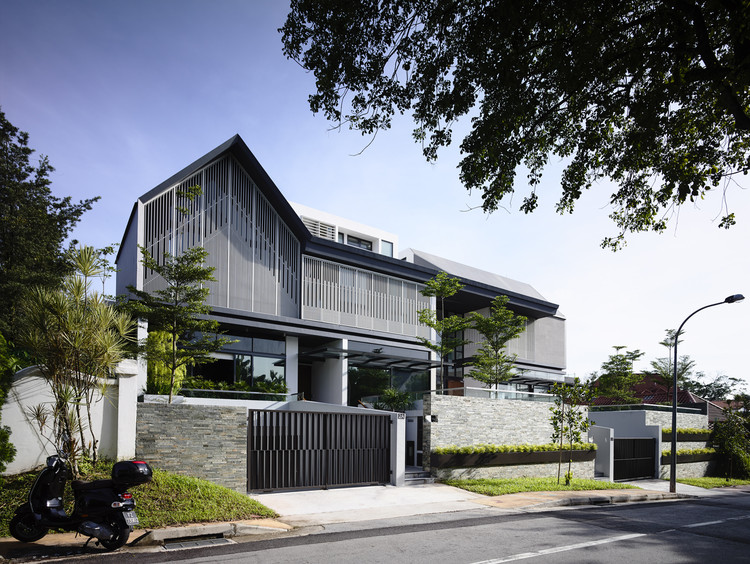 Text description provided by the architects. Having constructed their house themselves over 25 years prior, the clients were somewhat reluctant to tear down the unassuming bungalow that had been a repository for so many memories throughout the years of raising their family. In order to make their plot of land sustainable for the next phase of their lives, however, they decided to replace the existing house with two semi detached houses where their eldest son and his family could be next to them as well as a separate apartment for their youngest son.

The designers at AD Lab were sensitive to the emotional bond the clients had to their Holland Grove home and proposed a design that echoed both in form and spatial relationship the existing bungalow in order to facilitate the transference of experience and collective memory from the old to the new houses.

After discussions with the owners, the architects found that many of the associations they had to the existing house were related to its double pitched roof form, as well as to its bright and open spaces that gave the feeling that the house was sitting in the gardens. With the new design, the architects retained the concept of the original roof form with one pitch at the front and one pitch along the side of the development. These pitches were then related to the entrance of the parent’s house at the front left side of the lot, and the side pitch defined the son’s house along the right side of the property.

The front pitch in the parent’s house encloses a two and a half storey living room. This lofty living space anchors the house and serves as central core that visually links all the levels of the house. The youngest son’s bedroom and suite is placed on the upper level of the parent’s house. In order to retain a sense of privacy, this zone is somewhat separated from the rest of the house, however the entrance area of the suite is vertically connected to the rest of the house through a balcony that overlooks the bright and airy living room below.

The proportion of the overall development is elongated in the new design and the designers used a pronounced expression of the architectural element of the line of the pitch and roof eave and stretched it across the frontage of both houses in order for the two semi detached houses to read as one large home with two distinct sides. This strong linear expression visually ties the houses together yet allows them have their individual architectural expression.

In an effort to surround the houses with gardens as well as to assist with cross ventilation and light into the depth of each house, AD Lab designed a central courtyard and water feature that wraps itself between the two semi detached houses. The designers saw that it was critical to the family’s communication to create openings in the part wall that typically separates two semi detached houses. They received permission to allow voids in the wall in significant locations where there could be visual connectivity between the main spaces of the houses, while maintaining privacy in others.

The permeability of the central courtyard between the two units and their parti walls as well as the cutting out of several other courtyards throughout both houses allows for the strong relationship of the houses with the gardens, the environment, as well as between the two houses. 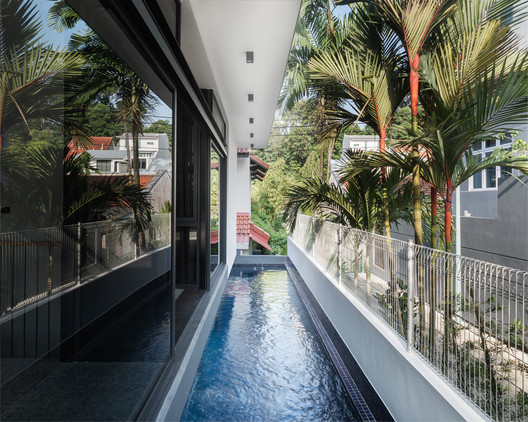