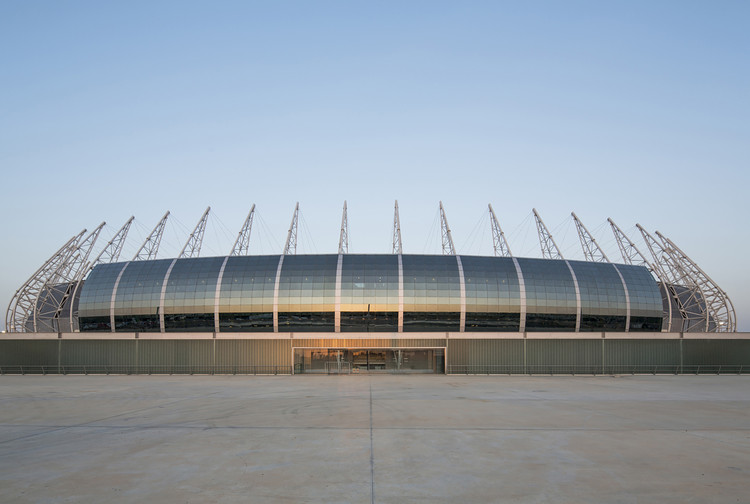 Text description provided by the architects. First one to be ready for the 2014 World Cup, the most economical arena in the last four World Cups and the first one in South America do receive a LEED Certification, Castelão stands out as an architectural monument of international standards, where the new and the old harmoniously coexist.

The main goal of the stadium remodel project was to transform the stadium in a multi-function, sustainable arena. Today Castelão is unique due to its ability to integrate part of the existing structure with the new one, and also for feeling grand and eventful even when empty.

The Castelão Arena was designed to be “the place for urban events” and to offer space for these events, the parking lots were eliminated, opening up into a great plaza. Located between two grandstands, this plaza works as an access hall to the stadium as well as a place to house temporary installations. The place establishes a relation to the topography where the State of Ceará Sports Secretariat was built as a part of the project, as well as other facilities that establish and interface the surroundings.

Despite renovations, the new design gives continuity and legibility to the original 1970´s project. The external volume of the stadium was enclosed by a translucent skin, but when entering the stadium the “concrete giants” - popular name for the original columns - are given their deserved relevance. The stadium has been renovated, but its identity was preserved.

The “concrete giants” establish through their inclination, the commanding element used as the concept to develop the new steel structure and the constructive logistics. Around the concrete structure, there were installed 60 steel trussed columns that had two main functions: to diminish the vibrations from the stands and support the new roof structure.

The roof structure was designed to be mounted using independent, modular pieces, which would accelerate the installation process. We opted for the lightest yet most rigid structure possible. This decision made it possible to use only small, moveable cranes instead of large fixed ones.

The roof structure accounts for 100% coverage of all spectators, which allows for thermal comfort and adequate ventilation. From any location in the stadium it is possible to see the whole field without any obstructions. The roof collects rain water that is later used to clean the bathrooms and water the green areas.

To reinforce the concept of an arena, which are a type of stadium design that allows the public to be closer to the field, Castelão´s field was lowered and the lowest stands were offset towards the field by 30 m. The distance between the public and the players is of only 10 m, the grass chosen for the field was the Bermuda Tifton, Celebration type, planted and grown on site.

Around 70% of the upper stands were preserved and only a slice of about ⅕ of the stadium was imploded. The operation received the World Demolition precision engineering award. All high-complexity functions were concentrated in this new module that corresponds to programs in need of high technology installations such as VIP areas, press rooms, control rooms, mixed zones, lounges and restaurants. By concentrating these functions in one area, time and money were optimized.

Still considering this optimization, the lower stands construction process was done in an innovative way, using a pre-fabricated in loco, slab on grade process.

The benches on the stands are worth mentioning as they are retractable and anti-vandalism, the same ones used in the Olympic Stadium in London in 2012, and in the FNB (Soccer City) stadium which hosted the final game in the 2010 World Cup in Johannesburg, South Africa.

During construction, the arena adopted measures that in the end, reduced environmental impact as the use of existing structures; use of a recycling plant to reuse all of the concrete during construction; use of a truck wheel wash in order to avoid muck and soil wear around the job site; separating the roof’s structure metallic from the steel structure from demolished parts and sending them to recycling.

Besides that, old objects from Castelão that were in good shape such as chairs, score boards, grass, canopies amongst other things were donated to smaller stadiums.

During the construction process there was a constant effort to ration materials as well as use mainly local materials, which saved on tons of steel and concrete. The reduction of potable water usage was reduced by 67,61% by simply using steel and water saving technologies. The Castelão installed an air conditioning system that does not use refrigerating gases such as CFC (chlorofluorocarbon) which is responsible for the destruction of the ozone layer.

More than playing its role of a modern, multi-function, sustainable urban equipment, Castelão Arena fulfills all of the expectations of the city and its citizens. As a legacy, Fortaleza is gifted with an architectural monument with symbolic and touristic value, able to not only stage sport events, but also great international performances which enhance the region´s urban development potential.

Amongst the 12 stadium selected to host the 2014 World Cup, the Castelão Arena was the only one to present a reduction in previously estimated costs - total savings of R$ 102 million - and to be finished before its deadline, on December 15, 2012. According to Héctor, Vigliecca & Associados founding partner, the fact that the stadium development was carried out only by the office contributed to this positive result. “We were able to monitor all aspects of the construction progress” he says. The arena is the result of a project done 100% in Brazil which eliminated the need to wait for international guidelines. This helped us make decisions together with the engineers and contractors. This dialogue was very intense. The architects oversaw the construction from start to finish, being able to evaluate any difficulties that would emerge and quickly be able to adapt to any specific conditions or unexpected changes in the market. “These proactive attitudes helped up reduce costs and also increase construction speed” he adds.

The construction process - done in the most industrious way possible - and the constant physical presence of several representatives of many government sectors also positively influenced the process.

Due to bureaucratic reasons involving the bidding process, construction begun almost a year after the project was completed. Instead of the usual 3 years needed for this type of project, Castelão had only two. And it was finished prior to this already tight deadline. “Normally a stadium with 60 thousand seats takes 36 months to be built. We were able to finish the stadium in only 20 months”, explains the architect Ronal Werner, project coordinator along with Héctor Vigliecca and Luciene Quel. 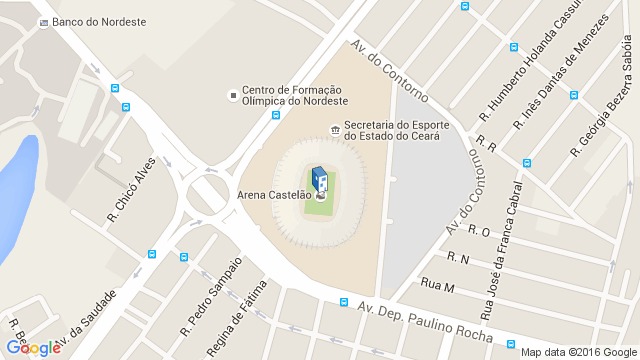