Text description provided by the architects. Casa Puerto del Aire is located between the limits of Puebla and Veracruz. Is a deer farm with an area of 70 hectares.

The home sits in the only ranch plain having an area of ​​3 hectares completely deforested but with spectacular views, including the Pico de Orizaba.

The area where the ranch is located has a micro climate which flora, very particular, hosts a forest of oaks, many of which are endangered species.

Therefore as part of the important work of landscape architecture were also create an artificial lake that serves as a reservoir of water in the rainy season and the rest of the year for irrigation of 3 hectares.

The climatic conditions and situation of the land, which had views of 360 degrees, resulting in the idea of ​​giving a plant cross at the four cardinal points long views. It emphasize the cross with two stone walls that they turn around and generate the envelope of the wooden buildings which are attached, generating major corridors throughout the house with lighting in the stone walls .

We decided to use a construction in cedar wood walls, floors and ceilings in the private area of the house as in the playground and dining as well as achieving a cozy cottage feeling, attending the climatic situation of the place. In the central area of the cross is the entrance hall; in this area we made a change using limestone pavement in order to emphasize the idea of the plant cross distinguishing between the different areas of the house. 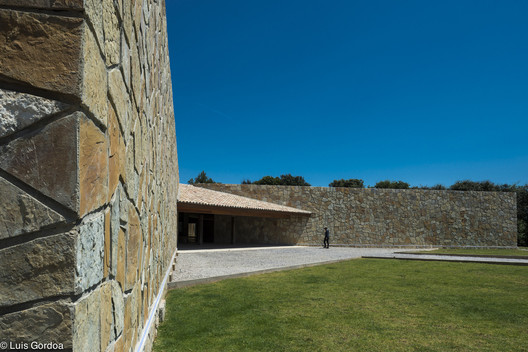