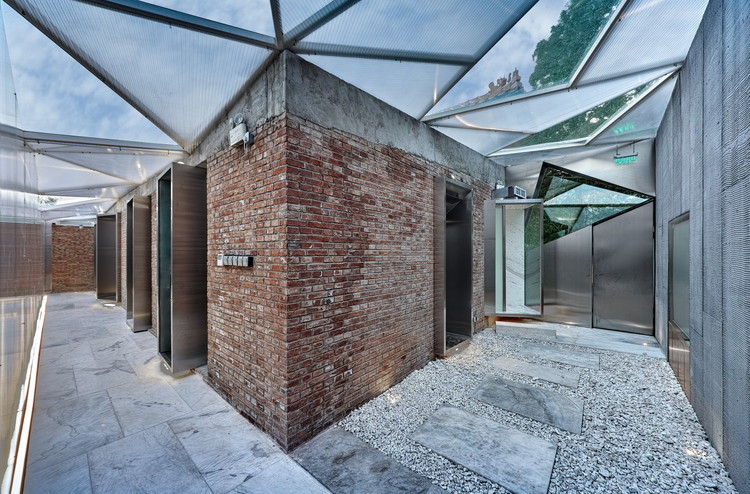 Text description provided by the architects. The Red-wall Teahouse is situated inside the People’s Cultural Palace which used to be the Ancestral Temple – a royal memorial temple for ancestors southeast to the Forbidden City. The palace wall on the east side of the temple wrapped around the Forbidden City as the second ring wall in which Tian’an Men functioned as the main gate. The wall had long been a symbol of social class division in old China, now nothing but a spatial threshold separating the imperial garden from the Hutong houses to the east. During modern authority transitions, undocumented damage took down northern half of the wall.

The renovation project took place right at the breakage of the wall. Two shabby warehouses were left on site unattended, one attached to the red imperial wall and the other one set around three meters away north to the first one. As an immediate design reaction, the roof of the first warehouse was tipped down to reveal the body of the palace wall on the Hutong side. Then a cluster of freestanding steel-frame tearooms were inserted into the middle of the ‘unroofed garden’ introducing courtyards in between the old and the new structures. The exterior of the north teahouse which had been kept in better shape was insulated with new cover material. Its interior was opened up to match modern program needs. It is, then, through such interplay of old and new, volume and void, tradition and modern, solemnity and absurdness that unprecedented readings on local environment start to emerge.

The teahouse consists of seven unique rooms snapping to each other exhibiting a form of cell division. Visitors must enter those rooms through existing doorways and window openings in the brick wall. New structures grow back in like bio-cells metabolizing on urban scale. At the threshold where the sublime royal garden meets the austere Hutong daily lives, architectural gesture is unstable, ever-changing always on a status of readjusting and adapting. Tea ceremony is only the basic type of activity. Occasional social events, such as art exhibition, charity auction, festival ceremonies etc. will be able to bring local residents closer to the traditional built environment while inject modern values to the dysfunctional ancient temple.

As major façade material, brushed stainless steel sheets and glass panel are placed in different angles to the red palace wall reflecting its raw conditions. When one enters the courtyard, one sees the over height of the solid brick palace wall reflected on the teahouse exterior on human scale as if many pieces of the palace wall standing on freewill. Modern materials do not seek to establish autonomy but to engage cultural heritage with respect. Interior of the tearooms is finished differently with bamboo sheets, white marble, copper and acrylic tubes. Each room adapts a unique character dissolving architecture into smaller pieces. The experience of rambling inside the teahouse becomes effectively walking across a village as if the overall size of the space is enlarged. 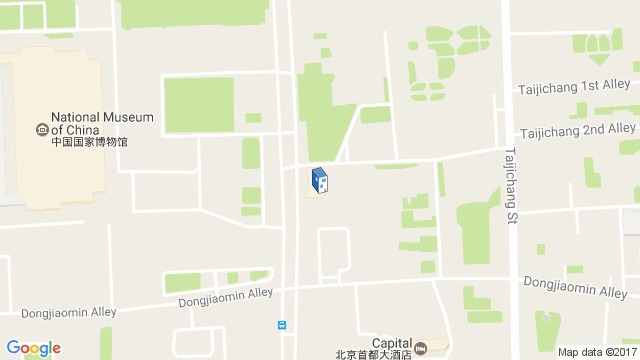