✕
Save
After the Wildfires: How Will Chile Rebuild Its Informal Communities?
Share
Or
Copy

For those unfamiliar with Valparaíso, allow me to inform you: this city is a treasure. The UNESCO World Heritage site and cultural capital of Chile is defined by its winding paths, happily graffitied streets, antiquated funiculars, and - above all - its colorful, tightly-packed hills. And because of its precarious density, the city was brought to its knees by vicious forest fires this past weekend, fires which quickly spread and consumed 2,500 acres, displacing over 12,500 people whose homes were destroyed.

The hills where the fires hit hardest are similar to Brazilian favelas - inhabited by informal residents who have little to no access to infrastructure and who constructed their homes themselves, illegally, and - as the fires have proven - rather perilously.

The response of the Chilean government so far has been to suggest bulldozing and building again in “a more orderly manner.” To do so, the government has intimated that it will expropriate land and relocate citizens to safer sites. 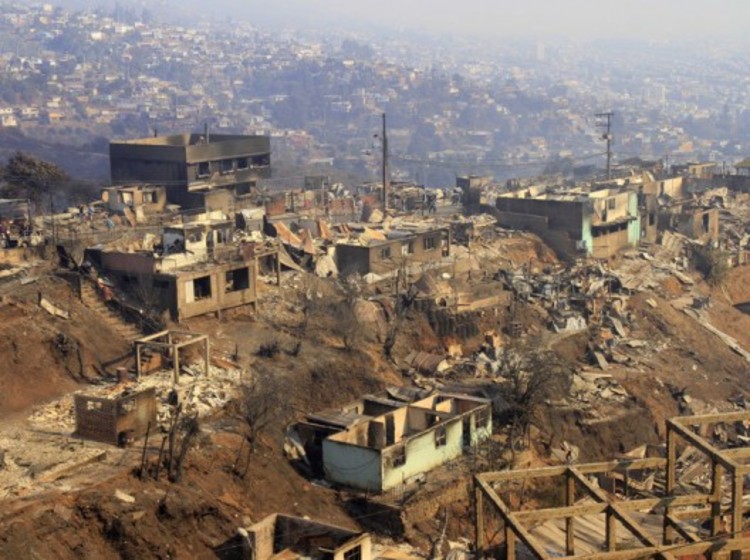 However, residents have already begun resisting this potential outcome. As ArchDaily correspondent Nicolás Valencia reported from Cerro Ramaditas (one of the hillside communities most devastated by the fire), many have refused to leave for fear that their land be taken from them; those that have gone, have left markers “cordoning off what they consider theirs with pieces of wood or metal cans.”

It’s a troubling dilemma: evict victims from the only home they’ve ever known or relegate them to lives at risk of future catastrophe. But could there be another way?

According to President Bachelet, many of Valparaíso's hills cannot be sufficiently protected from the threat of wildfire; thus, a masterplan is supposedly in the works, one that will prevent victims from rebuilding on their previously occupied lots.

Chilean architecture and urban planning experts are largely in agreement: architecture professor Jonas Figueroa told the Associated Press, "The government is responsible for having allowed homes to be built in dangerous areas, and somehow it has to show these people that they're in a place where their lives are at risk.”

The sentiment was echoed by the Chilean architect and urbanist Iván Poduje, who in a TV interview said that “The state [should], although it will be painful, prevent that houses be built in these at-risk zones.” He continued: “There exists an idealization of Valparaíso’s poverty […] what there really is, is a huge quantity of families who live in slums, in alienated communities without proper infrastructure.”

Although many residents would like to rebuild these communities exactly as they were, this option would be irresponsible at best; not only did these communities lack proper water/sewage/electrical connections, but the homes were constructed on “improper foundations on dangerous slopes and no way for emergency vehicles to reach them in a crisis.” Indeed, all locations that are truly unsafe for construction cannot be allowed to be re-inhabited.

However, what the government has so far proposed - constructing wide streets and “safer structures” which we can assume will be constructed from industrialized materials - seems to ignore the social and urban context that makes Valparsíso unique. President Bachelet has said she wishes “‘to rebuild in a more orderly manner, better and more worthy’ of Valparaiso’s status as a World Heritage City.” The great irony, of course, is that that kind of reconstruction would eliminate exactly what made Valparaíso worthy of that honor in the first place.

More importantly, however, I have yet to see how the government plans to - where possible - maintain the character of these communities, nor how they plan to involve the victims in the reconstruction process - if at all. The government’s reconstruction efforts after the earthquake and tsunami of 2010 have been of varying success; however, one of the most successful projects, still ongoing, has been ELEMENTAL’s reconstruction project in Constitución, a project that relied heavily upon resident input and collaboration.

Will the residents of Valparaíso will be involved in the reconstruction of their community? Will their voices be heard? Can innovative, community-led design solutions address the problems the government assumes can only be fixed by bulldozers?

Poduje suggests that Valparaíso could take as its inspiration Medellín, Colombia, a city that invested in “removing people from insecure locations,” but also in “building cableways and bridges, among other things, to diminish the poverty in its hills.” Medellín undertook a systematic campaign of urban acupuncture that Valparaíso would be wise to look to; however, the city also has many solutions closer to home.

Our correspondent at Cerro Ramaditas reported seeing terraces made of tires, concrete pillars, and metallic structures among the rubble. Indeed, the only remnants being set aside as volunteers clear the debris are these (potentially valuable) sheets of metal. Chilean architect Juan Pablo Fernández, who has been aiding as a volunteer, explains that all other materials are being disposed of, to be transported to land-fills.

He notes that there is a better way, for both the families and the environment: “In Valparaíso, there existed and to a certain extent still exists the tradition of constructing housing with wooden structures filled with adobe bricks, which improves habitability. The system combines flexibility and resistance to earthquakes […] In the best of cases, those bricks that have not been altered in their dimensions can be re-used directly.”

Chile is a country with 3,500 architecture students that produces 1,400 architects a year. 12,500 victims have been left without homes. Together, surely innovative solutions at the levels of material, construction, and planning can be thought up and executed - ideas that ensure the safety and quality of life of Valparaíso’s vulnerable residents, that look to mitigate harm to the environment, and that maintain the unique urban characteristics that make Valparaíso special.

On Sunday, Valparaiso Mayor Jorge Castro was quoted lamenting over his city’s “disorderly development,” saying, "we are too vulnerable as a city: We have been the builders and architects of our own dangers.”

The time has come for the people of Valparaíso to be the builders and architects of their own transformation.