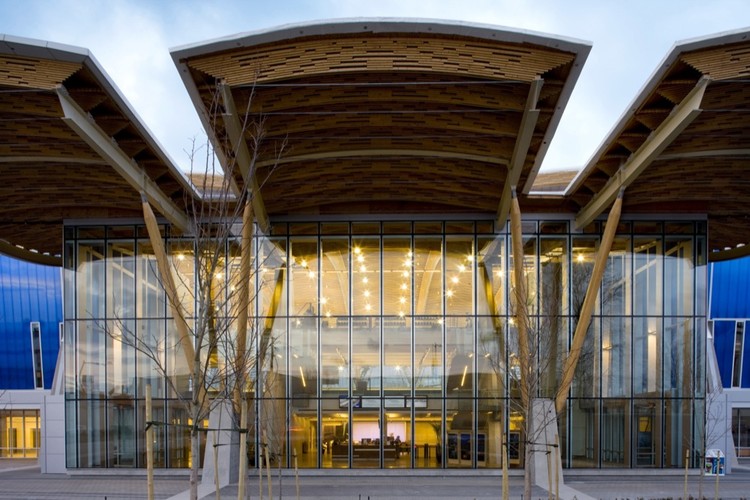 Text description provided by the architects. The 2010 Winter Olympics and Paralympics taking place in Vancouver, Canada open today and we'd like to introduce you one of the most important venues designed for the event.

The Richmond Olympic Oval designed by Cannon Design, is located on a 32 acres of city-owned land along the banks of the Fraser River. Olympics have been a big opportunity for cities, and the facilities built for the event have the challenge to start a new development, as it has been in this case. The Oval will be the centrepiece of a major new urban waterfront neighbourhood featuring a mix of residential, commercial, and public amenity development. The new Oval neighbourhood will be a destination and meeting place offering diverse indoor and outdoor recreational activities, shopping, and services.

After the games, the building will become an international center for sports and wellness, and thanks to its flexible design it can be used for a wide variety of sport and community uses.

Indoor long-track facilities are huge, however, and the buildings that have been built solely to host Olympic speed-skating events have faced significant revenue and operations challenges post-Games. To be cost-effective, an indoor Olympic long-track speed-skating venue must be convertible to other uses.

The Richmond Olympic Oval achieves this and more. Designed as an urban catalyst for local development, the Oval is convertible to numerous other sport and non-sport uses and will function as a civic amenity and community gathering place, combining community, social, and recreation spaces with compatible ancillary uses such as sports medicine, sports management, and high-performance training facilities. Its memorable form, likely to become an architectural icon for the region, is also highly responsive to the diverse character of the emerging community, the streetscape, and adjacent parkland.

The graceful and elegant heron, the official symbol of the City of Richmond, is the inspiration for the architectural design of the Richmond Olympic Oval.

The heron is celebrated in a series of feathered roof spans that tail off the edge of the building to create porches that will serve as outdoor gathering spaces. The roofline of the Oval also mirrors the outline of the stylized heron that is the centrepiece of the city’s logo.

Herons are a common sight on the banks of the Fraser River immediately in front of the Oval, where they can often be spotted fishing at low tide.

Flow, in its three principal states (smooth laminar, transitional, and turbulent), is celebrated throughout the building and site. Interior and exterior celebrate human existence within the daily and seasonal cycles of sun, water, earth, and wind. The rigorous order of the city’s built environment gives way to the natural order of the river’s edge.

Flight represents the elevation of the human spirit, through both elite athletic achievement and the eternal human aspiration to develop both mind and body. For the speed skater, years of rigorous preparation culminate in the turbulence of the Olympic event. Community members entering the Oval experience a lifting of spirit and vision in this oasis dedicated to the potential of the human body.

Fusion of the physical and spiritual elements of flow and flight is attained in the creation of a unique, inspirational environment that enhances the culture of the City of Richmond, the region, and the country. The estuary, like Canada, is both diverse and interconnected, fluid and elemental, powerful and calm.

The three primary themes are reflected in a number of the building’s striking features, including the glassed northern side, which provides spectacular views to the Fraser River and the North Shore mountains beyond, and innovative water features created from stormwater gathered from the Oval’s enormous roof.

The Richmond Olympic Oval is a model for cutting-edge sustainable design, breaking new ground for sports and wellness facilities. In addition to conferring direct environmental and social benefits, the Oval’s green design features are also expected to yield significant operational cost savings over the building’s lifespan.

After the 2010 Olympic and Paralympic Winter Games, the flexibly designed building will be repurposed as a multisport and wellness facility.

The Oval has achieved LEED® Silver certification – a highly unusual achievement for a facility of this type and size.

In the creation of ice, heat energy extracted from the water is usually wasted. In the Richmond Olympic Oval, some of this heat energy is captured for use elsewhere in the building. As the size of the Oval’s speed-skating rink is the equivalent of six international hockey rinks, this recovered heat energy is considerable.

The City of Richmond is also exploring the possibility of creating an innovative thermal energy utility that will use waste energy from the Oval to supply low-cost heating and cooling for the entire new 32-acre urban waterfront neighbourhood surrounding the building.

Rainwater from the Oval’s massive roof is collected and reused. Much of the collected water flows into the building’s utility systems to supplement toilet flushing. The rest is stored in a pond in front of the Oval for irrigation of the surrounding trees and landscaping. A fountain designed as part of a public art program oxygenates the pond.

The Oval’s ceiling is made of salvaged pine-beetle-kill wood. With a size of about 100 metres by 200 metres, the roof is believed to be the largest surface ever covered in the once-discarded wood. Showcasing the use of the wood will encourage its application elsewhere and mitigate the economic hardship the pine beetle epidemic has brought upon northern British Columbia communities.

Other timber used in the building’s finishes was salvaged from trees that were felled on the site.

The building’s positioning preserves the Fraser River foreshore and trees along the Hollybridge Canal.

During construction, recyclable construction waste was diverted from landfills and recycled.

Building materials such as paints, carpets, adhesives, sealants, composite wood, and laminate adhesives used throughout the Oval are low in volatile organic compounds.

The Oval project also incorporates features that promise to improve existing environmental conditions, including enhancing the intertidal marsh along the foreshore adjacent to the Oval site and strengthening the estuary.

Marsh plants in the rainfall collection pond act as natural purifiers, improving water quality in the pond and in the connected Hollybridge Canal.

Interpretative trails along the foreshore adjacent to the Oval highlight the area’s natural assets and showcase sustainable development practices. 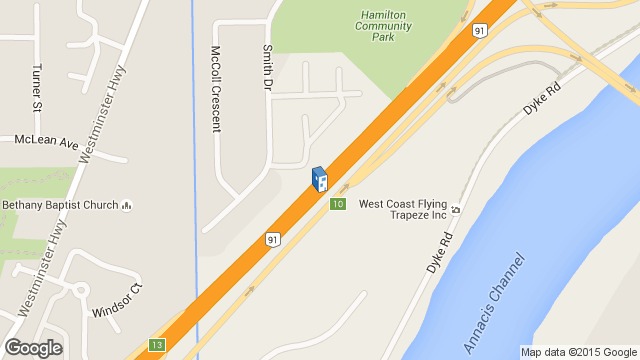 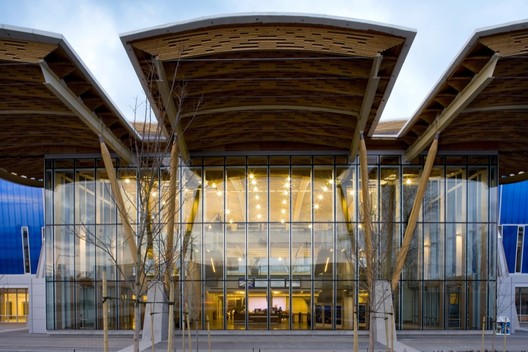