Text description provided by the architects. Ten years ago, when StudioMK27 tried to do a project using exposed concrete, many builders said that this was practically impossible. Yeah, Right - Brazil that has a vast modern tradition in the use of raw concrete? During a determinate period, in the 90´s, the use of the material declined sharply, restricted to the few architects that used it experimentally e sporadically, without fixing a constructive know-how.

Throughout the last decade, the recognition of the design and specification of exposed concrete has been revisited and developed. The modern brutalists adopted raw concrete under the pretext of formal truth. In reality, reinforced concrete imposed the construction of complex formworks, generally with new wood and of good quality, making it a costly material. The construction of a ripped texture needs precise carpentry of total craftsmanship, mounting the negative of the building in hand-made wood. Additionally, the concrete needs a special composition in order for it to be worked adequately before solidifying. When deformed, the concrete is practically in its final configuration, making it a risky process, with little room for error.

Concrete is, on the other hand, a type of x-ray of the construction and of the passing of time, where the surface is impregnated not only with the smallest defects but also the knots of the wood. It is liquid stone, as has already been said. The experience of constructing in raw concrete during these last ten years has shown StudioMK27 the impracticality of making an absolutely perfect material. The House of Ipês incorporates this experience of design and construction in exposed concrete.

In this house the material is used in a radical manner throughout the upper volume and, as such, the large concrete Box appears to be floating atop a glass volume. In the living room, which continues to the veranda and the garden, the doors open entirely, diluting the division between interior and exterior. The main entrance is done through pivoting panels that also open entirely to the front garden. In the internal space, a long irregularly-shaped sofa wriggles around the room, constructing a space with no hierarchy among the different orientations.

On the top floor, a TV room distributes the circulation to the bedrooms, which are lit by a wood block on the concrete wall of the facade. The wooden brises offer the interior great thermal comfort and makes it possible to totally control the lighting.

The structure of the house incorporates large spans which accentuate the Idea of a floating Box, besides propitiating a totally free and continuous space. The use of raw concrete refers to modern buildings, aesthetically and functionally, as in a dialogue with this modern architecture. The House of Ipês, with its grand spans and brute material, transpires a sobriety and the concrete impregnated by the passage of time, exposes the existence of the life of the building. 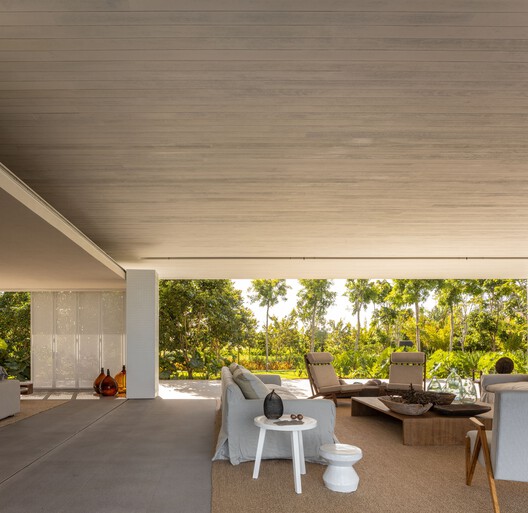 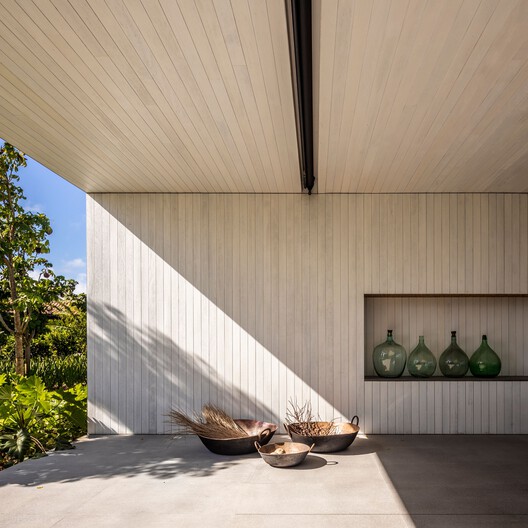