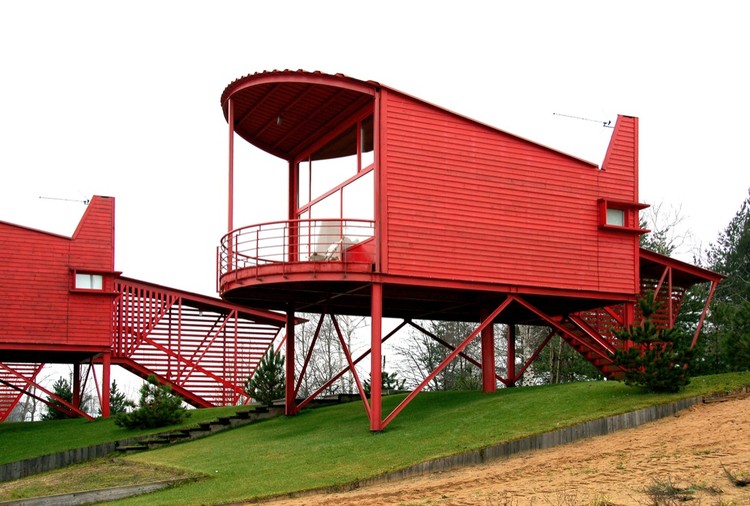 Text description provided by the architects. Architect Totan Kuzembaev, one of the brightest representatives of the so-called Soviet Paper Architecture of 1980’s, managed to find a real customer only in the late 1990’s, when he met Alexander Ezhkov, the owner of the Resort Pirogovo – a closed elite settlement of 100 hectares, located 20 km north-east from the border of Moscow (Moscow Ring Road) in Ostashkovskoe highway, on the shore of the artificial Klyazma water storage. The Resort was founded in 1960 on the initiative of Nikita Khrushchev. In 2002, the new private owners decided to make a full reconstruction of the Resort. The master plan and the development rules were designed by an architect Eugene Asse. The best architects of Moscow are involved in the construction of the Resort, but most of the buildings here are designed by Totan Kuzembaev.

Red Guest Houses are the first and perhaps the most famous of them. They have won a lot of prizes in Russia, and a special award of the Dedalo Minosse international prize for commissioning a building in 2008. This Italian award is given to both the customer and the architect; so this time the architect Totan Kuzembaev played the role of Daedalus and the General Director of Pirogovo Sergey Maslov acted as Minos. Finally, in October 2009, Red Houses were among the five nominees for the prestigious Building Awards 2009 – the only Russian award in the field of development, which estimates the development company’s contribution to the project.

According to Totan’s memories, when the area began to develop it was a dump that has emerged from a vacation waste. The forest, fields, beaches were filthy with bottles, boxes, cellophane, the ground covered with wounds from the endless fireplaces, broken and cut trees: there used to be about 1,5 thousand tourists per day here in summer. Today the land is cleaned and treated, and the gradually built buildings of unique architecture transmit the general idea: environmental friendliness, cleanness, creativity.

Red GuestHouses are lightweight wooden cabinets standing on high legs, with large semi-circular balconies facing the water. Totan tells about them: “A man always wants to climb higher; after he has climbed, he wants to sit there; and when he has sat down, he would like to have a roof over his head”.

In addition to deep respect for the natural environment, Kuzembaev’s architecture comes out of two things: worship of Russian Constructivism and masterly skills in handling traditional Russian material – wood: timber in his hands becomes very avant-garde, but without losing its traditional qualities – warmth and softness.

The Red Houses have no foundations, they stand on thin legs, as if taking care not to mash the grass that grows beneath them and looking around through the large window and from the huge balcony. This architecture shows clearly that the main value here is not the house itself – it is the nature: the place where the house is situated and the scenery one can observe out of it.

At the same time small area of the inner space are allocated in a very functional way, so that the rest is wholesome and the connection to the nature is maintained at any time.

Totan is sometimes reproached for his Red Houses looking similar to those of Bernard Tschumi in the La Villette park. His reaction is quite indignant: “Well, what have we taken from Tschumi? Red colour, or what? Except the colour our objects have nothing similar to Tschumi’s. He has created a lot of decorative things that have no function at all. We have purely functional objects. And who says the red colour was invented by Tschumi? Long ago our constructivists painted red too”. 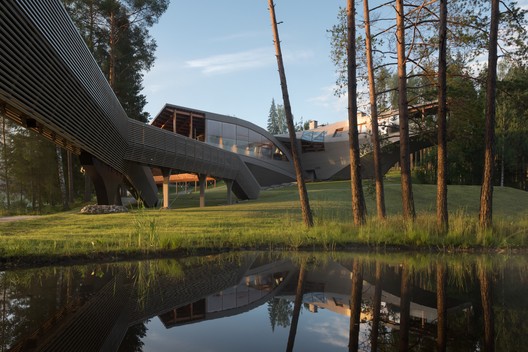