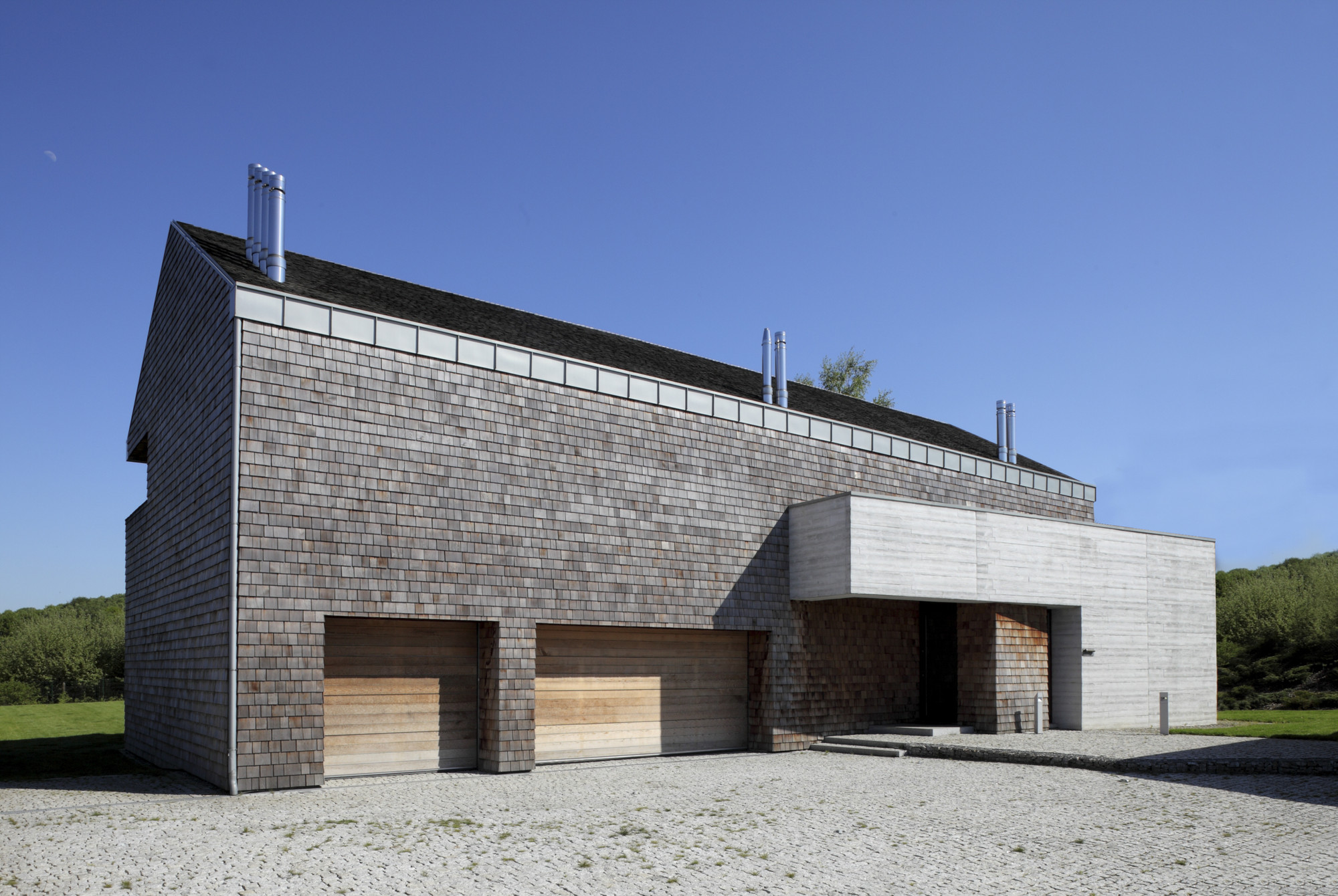 Text description provided by the architects. The Concrete and Cedar Lath Villa was designed by Barycz & Saramowicz Design Office and was built in Cracow, Poland, at Jabloniowa Street.

The Villa was composed of two interpenetrating blocks. One is a traditional form in a modern setting with the archetypal gable-roofed house shape which is deeply rooted in the collective consciousness. The other is a modernistic flat annex.

Owing to the unique plan of the building – devoid on one side of all window openings – we could isolate it from the urban area, create an intimate garden, as well as offering an unparalleled view of Kraków’s panorama.

The dualism of the villa’s space composition is reflected in its functional zones. In the modernist annex a single-space daytime area was linearly planned, based on a novel space concept which combines convenience with elegance. It follows the principle of floating space and comprises a kitchen with a separate pantry, a dining room with a sideboard, and a living room with a fireplace. Minotti Cuccine equipment, Murano lamps, a collection of „Młoda Polska” paintings make the sythesised image complete. The entire daytime area is lined with a wooden terrace which offers a panoramic view of Cracow. The facade of the building includes the ground floor lobby, a study which can be used as indoor entertaining area, a small recreational zone and a separate home cinema room. Furthermore there are a technical area, a storage room and a garage. On the top floor, there is residents’ private area with bedroom, a walk-through closet with a dressing table and bathroom. Adjacent to it there is the child’s private area with bedroom as well as its own bathroom and closet.The private rooms are accompanied by partially roofed terraces.

The building’s unique facade has a strong emotional impact and expressiveness. It is based on the dialogue of two materials: architectural concrete and lath, which is made of Canadian cedar. The same material was used on the steep gable roof. Although gabled roofs are a common element of Poland’s landscape, here the colour and texture of the roof and walls were unified. The natural imprint of the formwork boards is intentional and serves as the reversed image of the wood, otherwise so copious on the facade. Thus, two elements are intertwined here: the warm dark shingle and the cool luminescent concrete. In time, the wooden covering will acquire beautiful, grey patina, whose colour will harmonise with the cool concrete tinge. The house has no cornices, nor eaves. However, it has gabions with crushed granite and all-glass banisters by way of modern minimalistic decoration.

The shape of the building derives from the two principal axioms of the space philosophy of the Biuro Architektoniczne Barycz & Saramowicz. The first says that the beauty is the shape of the purpose. The other says that contemporary Polish architecture ought to be progressive and hypermodern but it must not be a blueprint image of the international style.After all, it should rely on the national tradition, culture and material.