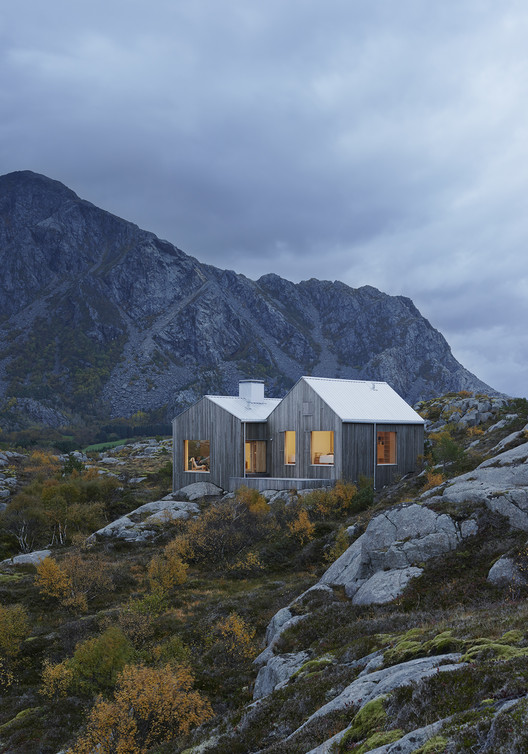 Text description provided by the architects. The house stands on the island of Vega in the Norwegian ar- chipelago not far from the polar circle. The site is distinctive for its grand and harsh northern landscape with wide pano- ramas of the Norwegian Sea and the jagged mountains rising from it.

Not far from the site, near the ocean shore, stands a group of traditional seaside huts, in Norwegian called Naust, whose forms and materials reflect many years’ experience of building in these conditions. The outermost hut shelters those behind – the huts being placed at odd angles to each other, partly due to topography and partly due to chance. The windowless weathered wooden facades have a straightforward tectonic and a strong material vocabulary.

We believe that good buildings engender the refinement of everyday life, having a curious, evocative and empathic na- ture. We have aimed to build a contemporary Naust with an unpretentious presence and a distinctive character, develop- ing themes from the vernacular architecture.

Seemingly growing from the landscape, the house sits on a rock beneath a granite shoulder negotiating the uneven ter- rain. As not to disturb the dominant view towards the sea, access to the house is given through a narrow natural ravine densely grown with gnarled birch shrubs and laid out with sea-sand from the nearby shore. The landscape remains un- touched and wild.

The large windows of the house face three directions, each with its strong unique characteristic. They are simple and ro- bust in detailing and the optically white glass conveys undis-turbed frames of the ocean, the mountain range and the bed- rock.

Organized on two levels adapting to the terrain, the plan is compact, providing generous social spaces within a limited floor area. The upper level is comprised of smaller scale bed- rooms and family rooms, whereas the lower level is a large gallery-like space structured around a stone hearth. Com- pleted in linseed oil painted pine with untreated birch skirting, frames and reveals – the interior is kept subtle with a character of being hand-built – promoting tactile qualities and the at- tractive patina developed over time.

Upon completion of the house the clients’ father, who spent his childhood in the close vicinity, visited the cottage. Being able to sit down – for the first time – sheltered from the ele- ments; he stayed seated for several hours silently observing the ever-changing light over the sea.