Save
The Coxwell House / Rohan Walter 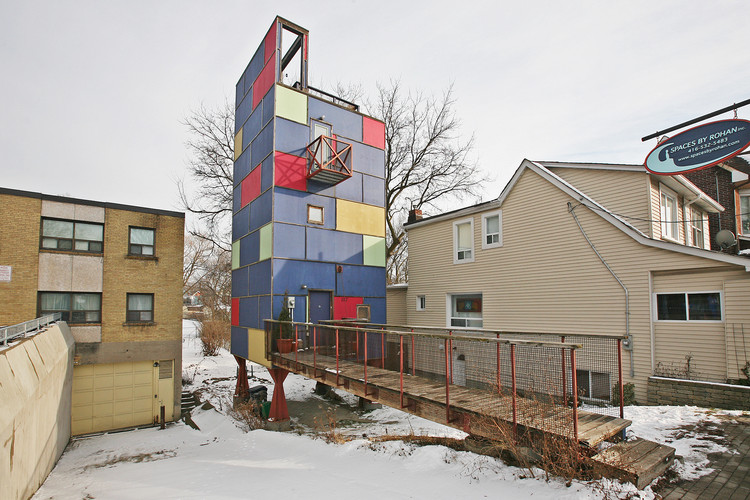 The Coxwell House is just such a property. Its topography, the necessity of respecting the neighbour's site lines, the many beautiful trees and historically soft soil (the site is in a former creek bed) and numerous zoning difficulties made it unworkable using conventional methods. At least three other developers would not attempt to build upon this property for just these reasons.  Rohan's goal is to evolve habitations on land ultimately classified as 'throw-away' into places of dignity combined with the spirit of place. This property is such a challenge.

The Coxwell House and his first house at 1292 College Street ('Triangle 1292') are living examples of his work. Consciously building on marginalized land Rohan Walters creates simple dignity of habitation embodying the spirit of home.

The Coxwell House is a three story, 40 foot tall, 800 square foot, two-bedroom, resin - impregnated plywood house. This multicoloured building will measure approximately 16 feet by 16 feet that will stand on four steel posts. Access to and from the street will be via a 32 foot long bridge. The interior will feature two full bedrooms, a four piece bathroom, combined open space kitchen, dining room and living area, and eventually to have green rooftop .

Passive cooling and heating will be designed into the structure to minimize utility expenses. Hot water radiant in-floor heating of a concrete floor (the thermo-mass) will further economize on winter expenses. In warm weather the building uses the stack effect drawing air in at the bottom and pulling it through the building and venting it out the top. The air travels over the cooler concrete floors as well as acting as a cool breeze on the resident's skin drawing the heat out through the rooftop vent. The Coxwell House will be a livable, comfortable and an instantly recognizable home. 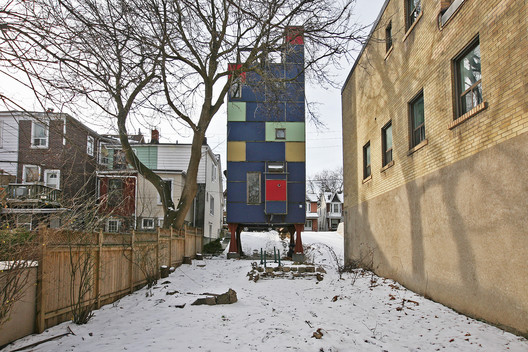