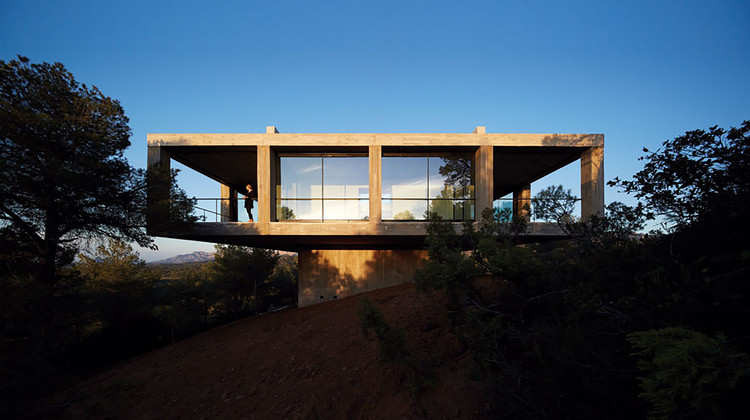 This unique entity occupies a dominant position in a rural landscape of vineyards and olive groves, set against a general background of medieval villages and rocky outcrops. A bare horizontal volume is detached from the ground, suspended in an almost archaic time.

Transparent and monolithic, the building is balanced on top of a blind pedestal, in such a way that its outline is divided between an elevated portion visible from a distance and another that disappears behind the leaves of native plant species. The aerial realm of the platform indicates the cardinal points. A panoramic perimeter ring punctuated by sixteen columns placed at regular intervals accommodates a sequence of rooms with undefined functions.

These crystalline, symmetrical living spaces are mutually independent and are linked by four open terraces at their corners. This portico is too narrow to contain a static living room and too deep for a balcony- cum-viewing platform. In this aerial realm, the only closed room (in the center) is not roofed; its four walls are perforated at their central point, while the floor is of water (the gentlest paving known to man), which reflects the sky.

After going along a sloping straight path, a bifurcated set of steps shapes the entrance; entering the house is like going into a twin tunnel that encircles the central swimming pool, with small openings set diagonally that allow glimpses of sky across the water. Under this access level a building services passageway goes around a room without use (and with scant overhead lighting).

The volume unity has something of the generic schema about it; its monumentally risky structure disappears in the outlines of its mass. It would seem that when Chilean theoretician Juan Borchers said that ‘architecture was physics incarnate,’ he was speaking not only of loads and tensions, but of life itself, which erases their effort.