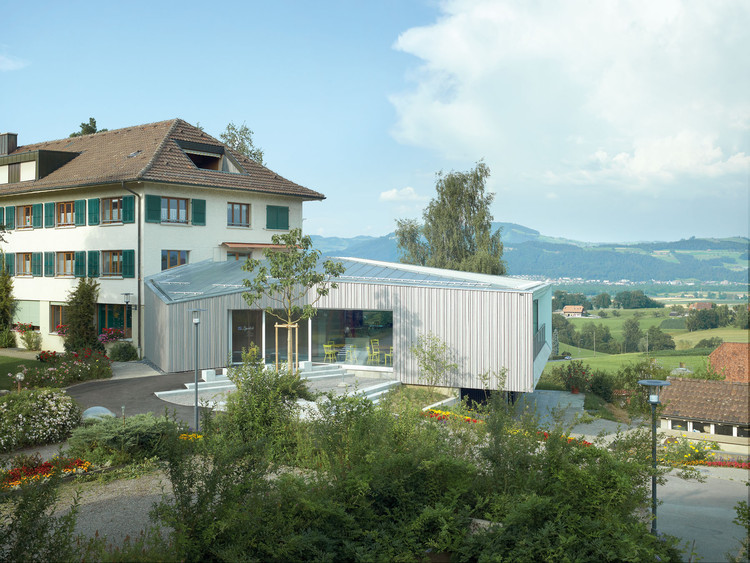 Established in the former “Alpine View” spa hotel 90 years ago was the deaf and dumb home. With the expansion of the current facility for hearing disabled residents, the old spa buildings yielded to more recent residences, workshops, stables and sheds. This loose ensemble, grouped around the landscaped inner courtyard, was no longer oriented toward the surrounding scenery.

We positioned the new pavilion at the apex of the sloping site and at the upper end of the access ramp – between the front of the main building and the greenhouses of the nursery. Here, on the threshold of the courtyard, visitors enjoy superlative views of the Eiger, Mönch and Jungfrau mountains, as well as of nearby peaks.

It was imperative that work on the new pavilion – which took place alongside the main access area of the campus - not interfere with ongoing operations. Furthermore, we were not able to redesign the immediate vicinity of the new building. In designing the restaurant building, our priority was therefore to generate a sheltered feeling that would allow the landscape to be taken in like a framed image.

The pavilion’s irregular, non-orthogonal, geometry avoids parallel alignments between walls, ceiling and floors. This suppresses in particular the flutter echo that is a special problem for sensitive hearing aid devices. Alongside this functional consideration, and by means of the figure of the projecting and receding outer shell, we sought to articulate the dining area as a sequence of delimited areas that ring the inner core of the kitchen. The south-facing loggia cuts deeply into the main space, so that smaller group events and regular restaurant business can operate in tandem.

Seen from above, the core of the kitchen lying within is set off spatially as a roof terrace. It serves as a secluded outside zone for the supervised residential group that is accommodated in the first upper level of the main building. Toward the valley side, the plant nursery extends into the interior via the building’s open basement level.

We tried to find a language that would harmonize with the rural neighborhood. But we also wanted to create a recognizably public and inviting building that would be set off from the conglomerate of in part modest functional buildings. The facade's silvery, glazed wooden slats, the sharply converging corners of the building, and the absence of a roof overhang create a textile expression. In addition the story-height incisions in the building’s shell, with its glazed surfaces on the west and east, and the inward-folding glass façade of the loggia on the south side are intended to evoke impressions of a large tent or small hall rather than of an ordinary ‘house.’

The inclined roof and the outer façade are set as a prefabricated wooden construction upon the floor slab and the kitchen core, both executed in situ in poured concrete. The portion of the roof surface that slopes downward toward the scenic views on the south side terminates in the support-free span of the horizontal eaves edge. It sits atop the room-height glass wall, itself stabilized by internal steel columns and beams, that frames the loggia.

It is vital that light, colors, and materials in the interior space conform to the functional requirements of hearing-impaired visitors: essential alongside good acoustics is continuous illumination, which allows adequate legibility of gestures and facial expressions. We “dimmed” all colors and highlighted contrasts between surfaces and materials. The chromatically restrained architecture of the dining area contrasts with the at times brightly colorful landscape outside, as well as with temporary decor for various occasions. 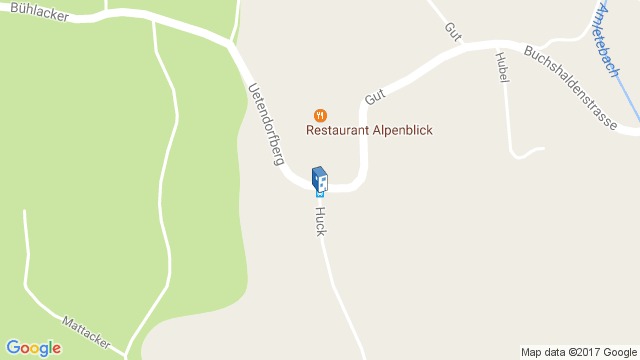 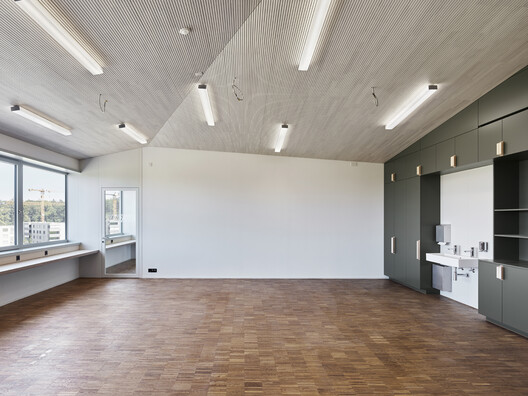