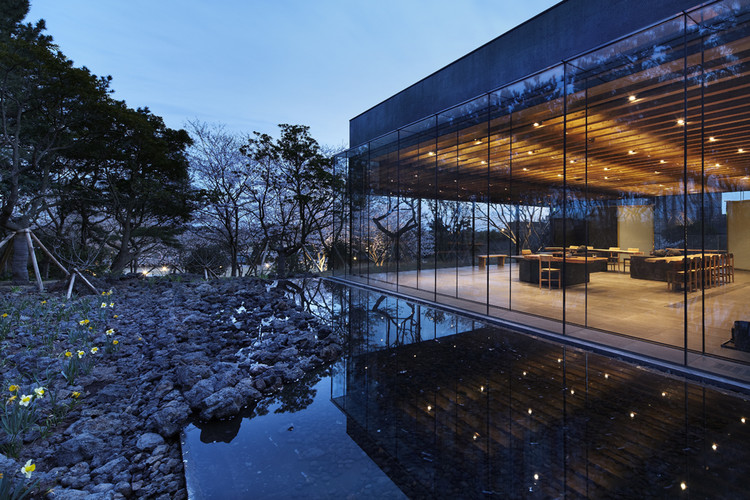 The scenic landscape of Seogwang Dawon, its main attraction being the tea farm, is located in Jeju Island, at a mid-mountain level, in a gotjawal. (Traditionally, Jeju locals call any forest on rocky ground "gotjawal". According to theJeju Dialect Dictionary, "gotjawal" refers to an unmanned and unapproachable forest mixed with trees and bushes. – Wikipedia; need to paraphrase). The Osulloc Tea Museum, Tea Stone, Innisfree, and the Innisfree Annex are located at the northwestern side of the Seogwang Dawon tea fields, with the gotjawal to the north, and facing the green tea fields to the south.

The area is currently in the middle of a large scale development, where to the southeast the Shinhwa Historic Park is being developed, and to the southwest, the English Education City. The Aerospace Museum is immediately adjacent to the site to the northwest, and because of such surrounding developments, the road at the front of the site has been expanded into the 30m wide, Shinhwa Historic Road.

As for the walking tour course, the ‘Jeju Olle-gil 14-1 course and the Jeoji-Mureung Olle approach the site from the green tea field on the other side of the road and leads to the northwestern side of the Osulloc Tea Museum, after passing through the front of Innisfree, across Tea Stone, and arrives at the 8km long ‘Path of Karma (Inyeoneui-gil)’, which starts from the Chusa-gwan (Hall) of Daejeong-Eub among ‘Chusa Exile Path (Yubae-Gil)’, and arrives at the Osulloc Tea Museum.

Located at the start of the path that connects the Tea Museum to the Annex Building, Tea Stone is rectangular in plan and is a building designed to show directionality with its main axis running parallel to the movement of the path. As only a portion of the building is revealed at the western end of the gotjawal, this box type building encourages visitors into the space of the forest.

Innisfree, a rectangular building, with the same width as the Tea Stone, directly faces the Tea Stone with the gotjawal in-between, and runs along the same axis. With such positioning, it was intended for the two buildings to ‘connect,’ so that the forest, along the path, can be experienced as a part of the architecture. As Innisfree is seen partially at the west of the gotjawal forest, with Tea Stone located at the opposite end of the forest, the visitors are brought into the forest by architecturally connecting the green spaces, located respectively to the east and west.

The annex building, with supporting facilities such as a warehouse, is located at the eastern end of the site for an easy approach for service vehicles. Positioned off axis to the north, it was designed as to not block the view of the landscape as seen from Innisfree.

Providing more seating in the café, the extension was designed to minimize changes to the existing form and space, with a 3m-wide addition, following the curvature of the café space toward the north.

The interior extension utilizes the existing curved windows, with the new exterior curve offset at a 3m distance, and was designed so that the extension is in harmony with the language of the existing building. Following this café extension, the length of the kitchen was expanded in the same direction, while the added cafe space is separate from the main circulation to allow for a space more quiet and calm. The new extension is faced with folding doors, and the entire space achieves a continuous flow to the landscape to the north, in fact becoming part of the outdoor space.

Tea Stone, planned to accommodate additional functions, is immediately adjacent to the Osulloc Tea Museum, and is a simple box, extending 20.3 x 11m on the slope of a hill.

The main structure of this building, which connects to the Chusa Exile Path, a Jeju Olle trail, resembling a black ink-stone, is a polished black concrete mass.  The glossy black surface of the building reflects the surrounding environment, that is, the gotjawal forest and the sky, making it possible to exist and give a sense of heaviness and lightness simultaneously.

From the rear exit of the Tea Museum, a 1m wide basalt bath crosses a dry creek and connects to the basement level of the Tea Stone, into a dark space, where one can experience and learn about fermented teas.  A narrow stair case leads up into a triangular space, the Chusa* Exhibition Gallery, on the first floor. The Chusa Exhibition space acts as the front room of the tea classroom. It faces the Tea Museum to the west, and has a dark glass exterior façade, making visible the landscape outside, yet able to contain the soft interior lighting.

*Chusa is the pseudonym of Kim Jeong Hui (1786-1856), a celebrated calligraphy scholar, poet, and painter from the Joseon Dynasty, who spent 8 years in exile on Jeju Island (1844,) and produced his masterpiece ‘Sehando’ (‘A Winter Scene,’ National Treature #180).

As one passes through this space and enters the tea classroom, where workshops and lectures take place, the preserved gotjawal forest is revealed through the glass façade. From the tea class space, the concrete walls of the Chusa Exhibition space act as pillars that support 10m long cantilevered concrete beams that form and shape the perimeter of the roof structure. Wooden rafters sit in a single direction within the structure of the concrete roof support, and makes up a saw-tooth type ceiling on the entire roof. This wooden ceiling provides a warm environment, and at the same time, allows for a soft reflection of natural light. The structure, without other support, allows for the tea classroom to have three glass sides, and it maximizes the feeling of openness as continued out to the gotjawal forest. The fireplace to the north also adds warmness to the space.

Two sides of the tea classroom, the north and south, used a dark glass, and a clear transparent glass for the east window toward the Innisfree building located across the gotjawal. With a 42m wide gotjawal in between, the two buildings face each other, creating a silent tension and as well as directionality to one’s gaze.

A shallow, polished black concrete pool sits adjacent to the glass window, reflecting the building and the forest, heightening an aura of tranquil stillness for the tea classroom.

Innisfree is located on the highest point of the hill, and is a rectangular building, with the same width as that of the Tea Stone. The two building face each other in axis with the gotjawal in-between.

Initially planned as a ‘forest gallery,’ the space was opened to the forest as much as possible, and in designing all four walls with glass allows one to enjoy the scenic surroundings from any given spot.  The materials used for the interior finishes come from the surround natural environment, such as wood and basalt, so that the 34.8 x 11m store and café space functions as one with nature.

A wall made out of cut stone, flush flat on one side, sits at the entrance. Through the glass doors, one enters the Innisfree shop, and to the right is the café, and through the transparent, frameless glass window, one can take in a panorama of the landscape of the surrounding tea fields to the east.

A 3.5m wide deck along the front of the café, as well as the folding doors between the café and deck makes it possible to have all sides ‘open,’ making it possible to eat, drink, and relax in nature.

A 6.3 x 5.3m basalt stone volume attached to the north side of the building includes a preparation room on the first floor, and stairs that lead down to the underground kitchen and mechanical rooms, etc., all to supplement the main café space.

Similar to the Tea Stone, the wooden rafters, in a saw-tooth type ceiling throughout the entire roof of Innisfree provides a warm atmosphere and soft natural light.

Along the upper portion of the southern façade is an awning made out of roughly cut shingles, blocking direct sunlight. The north, east, and west sides are finished with milled shingles.  All four shingled surfaces will weather together, naturally, as time passes.

The Annex Building holds facilities such as a warehouse and a bakery, etc., and was designed to be seen not as a building, but rather the backdrop to Innisfree. The exterior wall facing the green tea fields utilizes a stone fence, a material that that comes from the existing land, and is to be seen as a continuation of an element of the surrounding landscape (Jeju Island is known for the scenic stone fences that mark property, paths, and undulate with its natural terrain). The land is raised about 1.5m to reduce the 3.5m high stone fence (exterior wall) to mimic the natural topography. Three courtyard gardens are placed inside and outside of the Annex Building, and by planting tall trees, it minimizes the presence of the building when viewed from outside. The end of the building closest to Innisfree is the public bathroom, and from there, in sequence are the bakery, the employees’ dining hall, and the warehouse. To the rear of the stone fence, which sits symmetrically to the external wall of the bathroom, is the access and loading space for service vehicles. 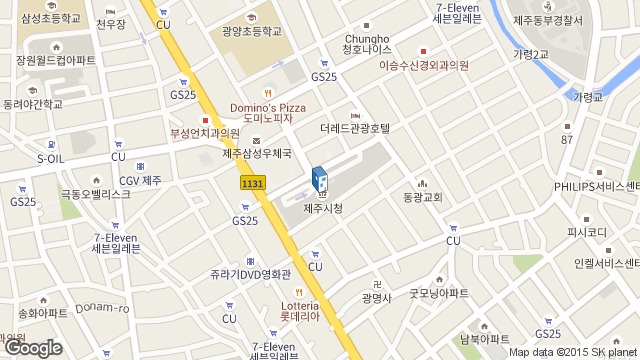