Save
A Brief History of the Windowless House
Share
Or
Copy

In this article, originally published by Metropolis as "Houses Without Windows: Meditative Respites or Architectural Straightjackets?", Komal Sharma looks into the architectural oddity that is the completely enclosed house. While many would shudder at the idea, there is a rich history of houses which, in exceptional circumstances and with exceptional clients, make sense without windows.

The Vertical Glass House by Chinese architects Atelier FCJZ is disingenuous to say the least. Its name suggests a vertical derivative of Philip Johnson's canonical house, and in fact its architects describe it as a 90-degree rotation of the typical modernist glass house. Instead, what welcomes visitors at Shanghai's Xuhui waterfront is a four-story concrete house without any windows. Where is all that promised glass, you might ask?

The answer is inside. The house's textured concrete walls give it the appearance of a bunker, but the interiors are actually light-filled. The architects accomplish this through an inverted sense of space. Where one expects walls of glass, yielding a platonic prism that brazenly exposes inhabitants to the outside world, the house instead delivers a surprising twist: the 7-cm-thick floor slabs are completely transparent, endowing users with a Superman-like sense of see-through vision. The experience of looking up through all of the house's spaces, even the most private spaces like the bathroom, is breathtakingly novel.

Read on for more about the phenomenon of window-less houses 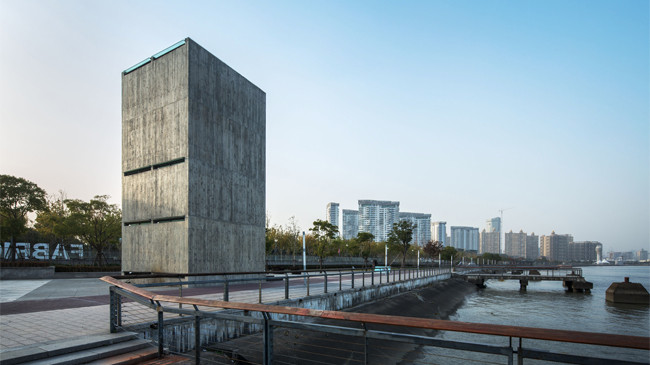 The original concept of the Vertical Glass House dates back over twenty years, when architect and Atelier FCJZ founder Yung Ho Chang developed the design as a competition entry. Decades later, he realized the daring house for Shanghai's West Bund Biennale of Architecture and Contemporary Art in 2013. But as strange as it is, the Vertical Glass House is one of the several architectural oddities that radically explores the notion of public and private space, and often ends up turning them on their heads.

There's a reason why meditation requires one to close their eyes. In shutting out the immediate environment, one hopes that the distractions of the world will momentarily recede to reveal empty calm. Even so, the leap from personal introspection to architectural typology is more than a little jarring. It's all well and good to take a brief respite from city life, but what happens to occupants whose house permanently closes them off to society?

With the Vertical Glass House Atelier FCJZ explains that their intention was to situate the house's occupants—resident artists and architects—in a fixed state of meditation. "With enclosed walls and transparent floors as well as roof, the house opens to the sky and the earth, positions the inhabitant right in the middle, and creates a place for meditation."

Similarly, one of Toyo Ito's first built projects, the U-House was intended as a house for mourners. The architect's sister had lost her husband to cancer when she, with her two young daughters, moved into the uber-private home Ito designed for them. The modest house (now demolished) consisted of one long corridor, bent into a U-shape that enclosed a private garden—the interiors' only source of light. The walls were sparse, not unlike those of a museum gallery. The architect and writer Stan Allen called it the "most radical house of the twentieth century," while its occupants described it as more tomb than home. But while the Vertical Glass House was conceived for a (temporary) arts expo, the U-House suspended its inhabitants in a permanent art space.

The U-House was perhaps the first of many windowless houses that Japanese architects have realized in the dense neighborhoods of Tokyo. While Ito's house was conceptualized as a poetic space for mournful reflection, its successors, like Tadao Ando's Azuma House, had no such hangups. And yet, to many outsiders, they appear as brooding places to live in.

Consider the Ryusenji House in Nagoya, Aichi in Japan. Designed by architects Uno Tomoaki, the house's reinforced concrete walls box in a simple suite of rooms—living room, a bathroom, and a sole bedroom. Unsurprisingly, there are no windows. Two light wells on the roof are the sole sources of daylight in the home. The character of the light falling through the square-and-circle-shaped apertures changes over the course of the day, Tomoaki says. Still, the interiors are, at best, starkly lit.

“I believe that architecture defines the relationship between people and nature. While not fully trying to control the people in a house—how they feel the space or how they use it—architecture’s richness lies in being able to maximize a certain relationship between people and nature, explains Tomoaki. "To me, a window, is one of the knobs or tools to control the relationship between people and nature. In that sense, I just picked up and focused on natural light and tried to maximize its character with this house.” It's only when prodded does he address Japanese architects' seeming preoccupation with windowlessness. "In case of the Ryunsenji House, the client, (a young couple with no children) specifically asked me to design a house without windows. In fact, I had to convince them to have at least a light-well in the middle of the house. I understand that they strongly felt the need for a private life," he says.

This affinity towards windowless, insular houses has its roots in Japanese culture. As the Tokyo-based architect Alastair Townsend outlined in a November story, the reasons for Japan's idiosyncratic houses can be expressed in economic and cultural terms. Japan has a rich history with building, demolition, and re-building, all in the pursuit of newness (that and scarcity of sturdy materials, as was the case in times of war). The Japanese housing market consists of 87% new homes, with the average house losing all value after as little as 15 years. Unlike their western counterparts, for whom home ownership amounts to a significant financial investment, Japanese homeowners do not expect to ever sell their houses. Middle-class couples and families, then, commission architects to build them bespoke houses suited to their own idiosyncrasies and desired levels of privacy. “It may be an exceptionally introverted client who asks an architect to design a house without windows," wrote Townsend. "Then again, the phenomenon conveniently sums up the collective psychology of this once ambitious nation all too well—a society that prefers to stay inside, guards its right to anonymity, and seems content to let the rest of the world pass by whilst quietly enjoying the private comforts of home.”

Returning to the Ryusenji House, Tomoaki recalls its occupants’ far-from-dim reaction of living in their windowless home. The architect reports how a few years after completing the house, "I visited the client and they said to me: 'We have never experienced such a sense of freedom in our lives.'”

The window is also a lens that controls what you see or what you don’t see. Lisbon-based firm Aires Mateus explore this idea in their Leiria House. Built on the outskirts of Leiria, Portugal, the house is ideally sited on a hill overlooking the city and a nearby castle. The house playfully recreates the shape of a quintessential home, complete with gable roof. Conspicuously missing, however, are the windows, which have been seemingly paved over in wide expanses of white wall.

A large skylight pours light onto a central courtyard below, which in turn lights up the surrounding rooms. These form the house's main living spaces, while the bedrooms are arranged above and below them.

Apart from the skylight, there are no traditional windows on the house's exterior walls, save for one large cutout at the home's entrance. An architect from Aires Mateus, Jorge P. Silva, explains the role of the window in this particular scenario: “While the windows serve the same purpose as in any other house: allowing light into the spaces, permitting ventilation and establishing a relationship with the exterior, it has a specific, slightly tweaked purpose. That of seeing mostly the distant view—the Leiria Castle—instead of the immediate ‘disagreeable’ surroundings.”

The Leiria House, then, poetically manipulates the window as an architectural tool. It manages to leverage the main asset of the site—the view of the nearby castle—and enhance the relationship of the home's occupants to their desired vista. If the house seems overly abstract and alienating, Silva assures us that it isn't. “This is a completely conventional home where people live every day and the owners have been happy and enthusiastic about it.”