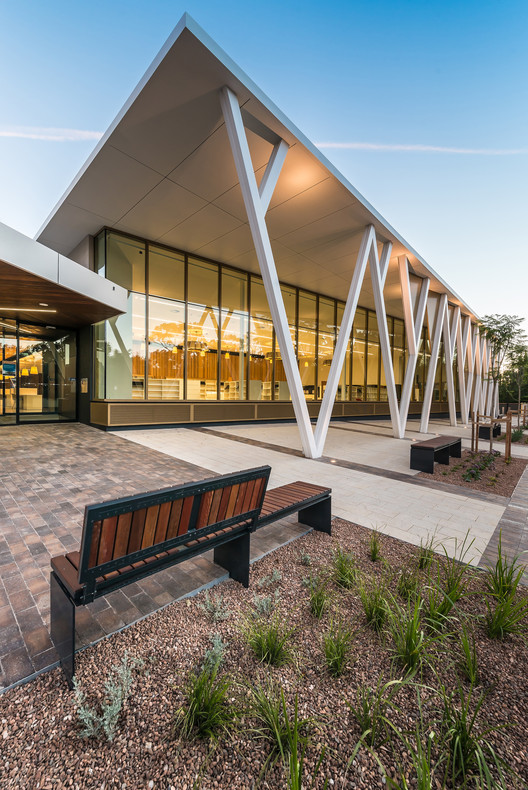 Text description provided by the architects. Our design for the Civic & Community Centre was motivated by the Town of Walkerville’s sense of community, its historic vernacular and the opportunity for celebration and growth within the Town. The new building connects to, and re-establishes the presence of the esteemed Town Hall while creating contemporary new administration and public spaces for the Council and community.

The project brief required a new public library, Council admin areas and the restoration of the locally listed Town Hall building on the site. Through client consultation, we extended the brief to include event spaces, community meeting rooms, a community gallery and a new commercial kitchen.

From Walkerville Terrace, the building relates to the proportion and scale of the adjacent Town Hall but is also contrasting in its external appearance. The colonnade of screened columns along Walkerville Terrace has a striking sculptural quality that changes mood with the movement of the sun, and the scale and depth of this facade reflects a level of civic presence. By abstracting and integrating distinct local forms and motifs into the fabric of the new building, it is subconsciously familiar - an interpretation of Walkerville’s distinct built form character that automatically resounds in the mind and spirit of the local community.

This layering of abstracted local forms is repeated throughout the building in the window framing, ceiling and lighting configuration, interior detailing, urban design elements, and recessed brickwork details, further reinforcing the integrated nature of the design concept and project aspirations.

The notion of a ‘Public Living Room’ inspired the internal planning, connectivity, materiality and detailing to create spaces that are grand yet welcoming, public yet personal. The building also aims to unify civic and residential qualities in response to its contextual position along Walkerville Terrace, and its connection to the adjacent Town Hall. Overlapping internal spaces allowed for greater interaction between users, a multifunctional approach to space allocation and ultimately the provision of more community oriented facilities.

The project adopts a low energy and water use approach, combined with a multi-functional and adaptable space use strategy. A natural ‘fresh-air’ ventilation system was incorporated into the library and office areas which allows outside air to condition the internal spaces, and to night purge the building of hot air accumulated during the day.

Like the Town itself, the new Civic & Community Centre has its own personality – bold and rich in detail and texture. It connects with, and reinforces the character and significance of the Town Hall – inviting further exploration and providing Council and the local community with an inspiring place to build on its past and grow into the future. 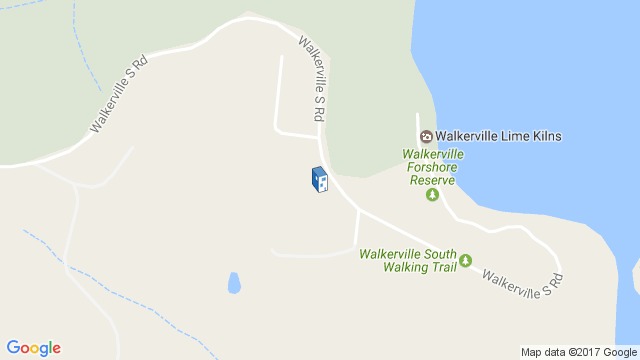 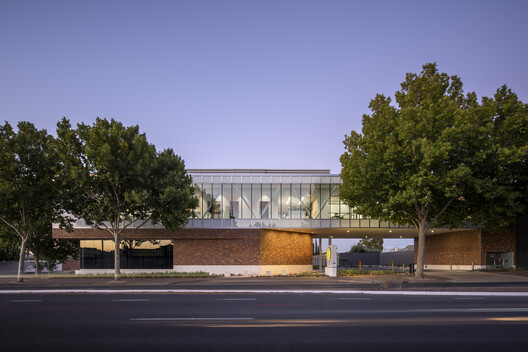