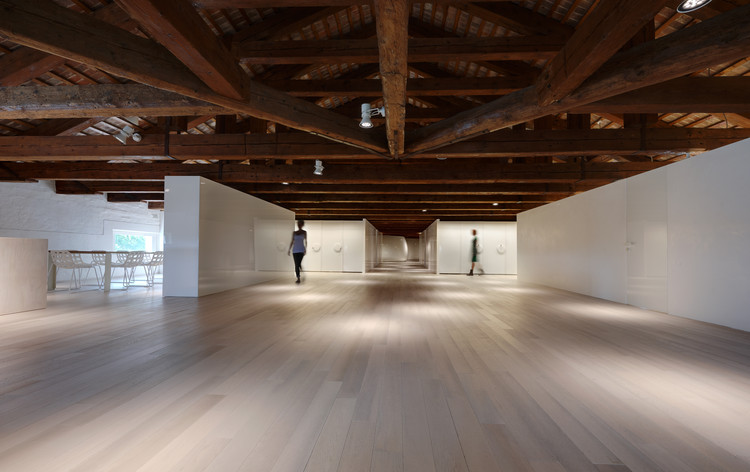 Text description provided by the architects. Merged in the green depths of the Riviera del Brenta, dotted by spectacular Venetian patrician  villas this masterpiece was designed by Giannantonio Selva in the second decade of the nineteenth century.

The comparison with the story has its roots in an area rich in attendance and visitors, the genius loci, which is mentioned by Dante in the Divine Comedy, which inspired Lord Byron when staying in the nearby Mira or Gabriele D'Annunzio who cites the lagoon in "The Fire" was perceived and appreciated over time by great minds: not by  chance Galileo Galilei, Carlo Goldoni and Casanova loved to stay in these places. Of this "story" was surely instructed Selva who in his travels between Rome, London and Paris had cultivated a taste evolved into a neo-palladian neo-classical rhythmic balance of shapes and decorations.

The Doric order synthesized and reworked punctuates the mighty façade divided by seven round arches symmetrical to the central palladian portal finished in smooth venetian plaster  and medallions decorated by frescos and ippocrani and surmounted by a large pediment.

The Barchessa infact as a stable of the villa housed breed race horses that are also painted in the boxes of equestrian paintings on the facade. For structures covering the entire building Selva had repeated the same structural system of wooden trusses of one of his great project: the Teatro La Fenice in Venice. Imagine the scene in the late eighteenth century in a misty morning at dawn, "mice" and "peate" on channel discharging stone blocks and statues, the architect Giannantonio Selva with its rolls of drawings and cartouches controls the vanishing and the patron of Villa Gritti Marchini who wanders around at the edge of his gondola ready to leave again for Venice.

222 years later in a spring twilight the architect Simone Micheli, parked his white SUV in the park with his Ipad hovers around the same prospects of the semi-dark Barchessa to decide the new lighting scenes while the workers involved in the restoration cross the mighty gates in wrought iron under the gaze of the four allegorical statues witnesses of the renewed splendor after a day in the yard.

Directed lighting turns on the headlights of an exciting interior design by architect Simone Micheli for new offices and showroom of RUBENSLUCIANO compared with the old memories that have been restored and enhanced through the new forms and materials of last generation. Candor and transparency - in high definition- allow you to read the ancient presences: the vertical connections, the crystal parapets and the lift fully glazed are the elements of a new digital architecture, liquid and light in contrast to the materiality of the details of the stone and vaulted ceilings and lacunar always visible and admired.  So it was possible to give the light to the stone-paved flooring with geometric diamond pattern drown in a snowy venetian pastellone where are laid the thin white stilts supporting aerodynamic balustraded mezzanine floors - on all sides - from a tape crystal is modeled profiles curvilinear. Vertical angle curved side scenes filter flows and the various functions located at an even pace between the modules of counter tops and white lacquered cabinets. The ground floor houses the creative division offices in open space sequences dominated by apollonion rigor of pure shapes with white melamine hitech worktops on a structure in painted aluminum and ergonomic chairs on wheels. In the central part, the large reception, background of synthesized lines, some septa white angled curved, with sliding doors, identify the area offices and graphics printers as diametrically opposed to the first office develops the showroom "materials, shoes and search "emphasized by the three major exhibitors overlapping ring countered where they are exposed all models shoe and some places on island with worktop in white melamine laminate structure on a hitech white painted aluminum for the exhibition of products.

At two opposite ends through the two vaulted exedras embellished by precious frescoes perspective of a coffered ceiling is reached the administration office, the room of representatives and the floorʼs services with large white porcelain sink resting on a L shaped shelf in glossy black that balances the system of automated hand dryer popped inside a powerful stainless steel chrome tube.

The staircase and the elevator in white painted steel and glass give access to lightweight mezzanine floors on stilts on the first floor where in four main areas are all open space offices identified as many of the creative division, with the same logic and distribution of furniture of the floor below, a slight suspension wrapped in a cloud of light that filters through the large arched windows on the fronts of the crescents and is reflected in the bleached oak parquet running longitudinally increases the sense of infinite perspective lightens further spatial perception. Some plasterboard false ceilings modeled in their geometric run the same flowing lines designed by the mezzanines and slight lowering in their lofts allow adjustable recessed spotlights to illuminate in a timely manner all work areas and general distribution pathways on the ground floor. Bounded by walls and sliding doors lies the creative area and services floor with dressing room with large white porcelain basin resting on shelf L shaped gloss black lacquered that balances the system of automatic hand dryer popped into a mighty stainless steel tube, chrome that descends from the ceiling.

On the second floor the large foyer lined with oak parquet welcomes visitors on a fascinating place under the large wooden structures with trusses that are enhanced in their mighty materiality of a careful game of adjustable led light. The old original trusses have been the subject of a careful restoration and renovation and the result of this great work of consolidation brings the viewer into the world of large structural complexes such as the cathedrals or theaters which the Giannantonio Selva had in mind when he designed the barn.

In open space square blocks covered in bleached oak with generous spaces undermount removable glossy lacquered generate a little kitchen available to staff and external customers with the two large tables with white painted metal structure surrounded by fluid fourteen sessions with sled and shell in white plastic. The constant movement of compressive and tensile strength of the roof structure are synchronized on the ground with large industrial shelving with sliding handle disc beveled white for the "cosmic" of the leather samples and materials.

In sterometric volume batch scanning and primary forms stand eps glossy white resin walls: a sinuous tentacle that wraps around and reveals curves and chicanes after the showroom with built- in niches carved into the matter with rounded edges on all sides that stretch as thin lips to be reverberated from the joints of the recessed adjustable led mini spotlights. In an eccentric position with regard to access to this area is the large meeting table with circular string beam tapered structure in the center and accompanied by seven swivel armchairs. The wood is the protagonist chosen to characterize and distinguish the meeting room with the majestic table made from the trunk of a cedar of Lebanon of which the bark - barely touched - is still visible and that you can feel all its aroma of resin-coated resting on mirror plinths and equipped with fifteen seats that are reflected in the mirror where is framed a 60"plasma tv. More intimate and relaxed mood in the office of Rubens Luciano: wall art gallery of nude framed in black are imaginary windows on the bodies waiting to be dressed in future projects of this mind, the desk stands on the floor with white thermoformed top and wood veneer fronts, the two black chairs, with their unique color throughout the project, while in front of the large two-seats sofa two smoke tables are declined in a shop window display box with glass top and a wooden tray to support the two moments of a long and fascinating creative process that have crystallized in the memory of the finished work and the vibrant energy of the prototype. 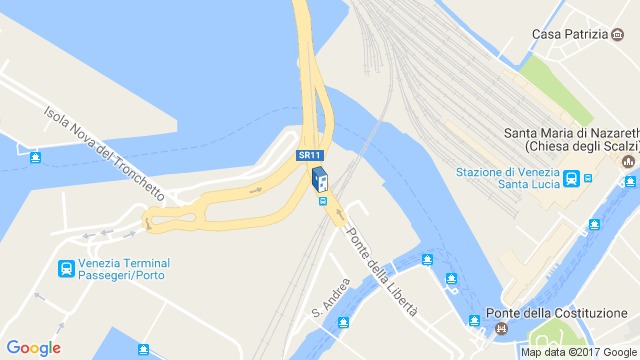 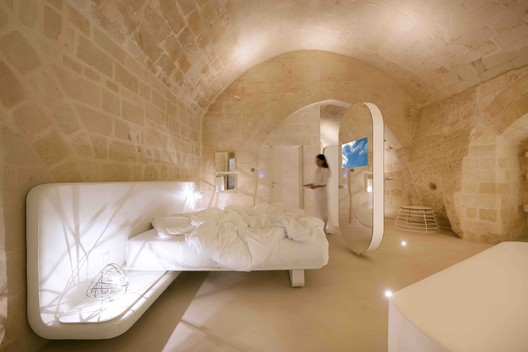