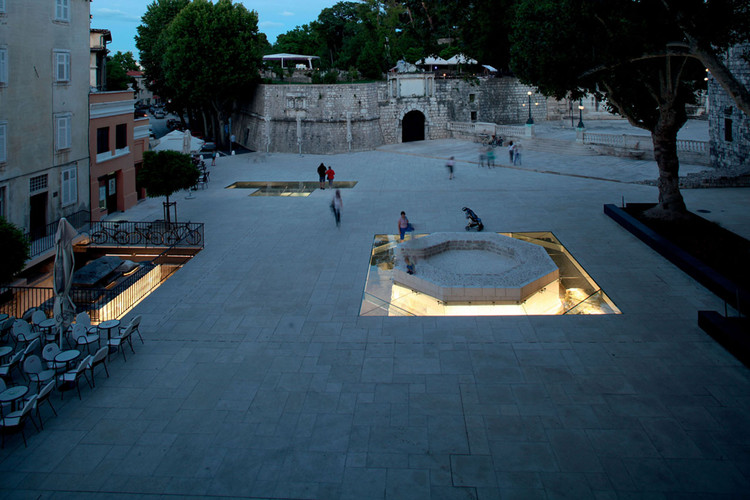 The public square is located in the historical centre of Zadar, at the end of one of the cardinal axis of this ancient Roman town: the Decumanus. This is where the town gate was situated for centuries and into the medieval times. The site is pregnant with historical heritage and radiates a genuine Mediterranean atmosphere. Also, most of the buildings forming the square were of greatest importance for the city, both in their function through the history, and in their architectural value.

Another specific characteristic of the site was, that the space in  question is actually a continual flowing of urban sequences starting with the Five Wells Square  at the foot of the Renaissance defensive bastion, continuing through the square and plaza which we rebuilt, and then connecting with the Roman Forum, today’s city centre, via Roman Decumanus still existing in the urban tissue.

During some improvement of the infrastructure of the city, in the middle of the existing square, some very important archaeological artefacts were found – remains of the City entrance from the Roman Empire, and very near a medieval gate.

One of the main terms of the competition brief was the imperative to integrate the architectural finds from both the Roman and medieval times nestled in the very heart of the square, with contemporary urban life of the city. The problem was how to realise a good presentation of these historical remains at about 1.60 m below the square level and still preserve the functional public space at the same time.

Next problem was the articulation of the pavement and urban equipment according to the specific way of life of the city in that part of Zadar, which include, on the one hand, a pedestrian route to the centre, and on the other hand a place for different kinds of cultural happenings. The background of the historical architectural artefacts can be used as a “stage design”, but also as a very informal public space with nice small restaurants. Beside all that, on the square there are two beautiful sycamore trees, over a hundred years old.

The place was unfortunately, for many different reasons (including the bombing during war in Croatia in early 90-thies), derelict in the last decade with the urgent need of refurbishing.

The biggest problem of the site was that there were too many important artefacts and functional demands on this relatively small space. We decided to reduce the architectural intervention to the "essential", a barely visible gesture, a sort of "cleansing" that will optimally highlight the immanent yet hidden value, while at the same time engendering a new potential, new interpretations and new identities.

Considering the archaeological remains, we integrate them into the living tissue of the square, without falling into the trap of making an “open air museum” out of the most vibrant part of the square. This has been achieved by, on the one hand, carefully reconstructing the archaeological finds beneath the present-day ground level of the square – anastylosis – and, on the other hand, making a “glass interface” between the Roman and medieval finds below and the contemporary square above.

The square is articulated as the topography of a continuous surface, creating a smooth and fluid alignment that connects all the different elevations of the square. By the same token, the urban furniture of choice was subdued. The very inclination of the square and its constituent elements - the archaeological anastylosis and the green islands framed by a wooden bench - form the sole urban equipment.

In our effort to find the appropriate architectural articulation for this beautiful, albeit dilapidated, space, we try to interpret the identity of a public square as the generator of urbanity and social life that rests both on continuity but also openness to the new.

The final impression of the square is something between ordinaries – as if always been there – and something slightly strange and weird, as some of visitor has expressed – the amazement of utter simplicity underlined by effect of transparency and reflection of glass in continuity with stone pavement.

As can be seen on photos, the square has been widely accepted as a place of social events, and is a favourite place for stroll and casual meetings. Also, with that square is defined the main tourist route between the Sea Organ made by architect Nikola Bašić, the Roman Forum and through the old historical city to his south-eastern end.

The living area of the square is a lot more than just sum of design decisions, it exists in the emotion, the atmosphere, and the spleen, as the beauty immanent on the place was integrated in design, there was also awareness of the need to provide a space for a new way of utilization in the time to come. 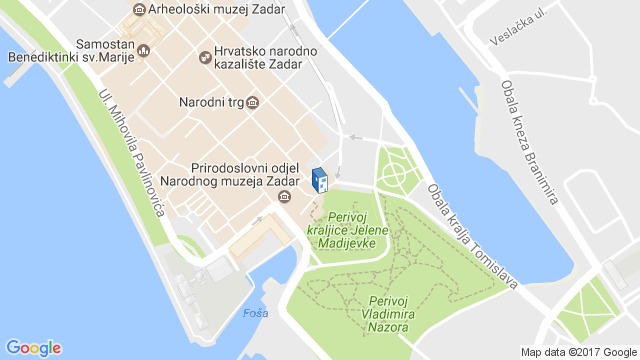