NBBJ, together with EOP Architects, has unveiled a massive renovation plan for Lexington’s famous collegiate basketball arena, Rupp Arena. An attempt to upgrade the 38-year-old arena’s facilities and strengthen its connection to the surrounding urban realm, the 23,500-seat stadium will be separated from the adjoining convention center, which is also undergoing renovation, while its enclosed facade is re-clad in glass and site sculpts a vibrant new public square within the heart of the city.

“In essence, the goal is to make Rupp a prototype for modern sports venues,” stated NBBJ in a press release. “The lower levels will be re-clad in a highly-transparent glass skin reaching as high as 40 feet above the ground. A newly expanded main concourse will wrap around the bowl and have views to the city, while the fan experience in the bowl will be revealed with direct views from the concourse.”

“Most importantly, the new Rupp will preserve the authenticity of the current building and respect the traditions of University of Kentucky basketball from over the decades,” NBBJ added. “Even though the bowl will be drastically upgraded with a new suite level, the two-tier system appearance from the original bowl will be preserved. The redesign will also keep the same number of seats as the original facility and the structural towers that defined the old Rupp will be rehabilitated as a wayfinding element.”

“Each side of the complex has different urban conditions that will require careful place-making approaches. The east side will have a large urban plaza that welcomes crowds. This area, combined with the new retail edge created around the Hyatt Hotel, will create a dense and lively experience. To the north and the west of Rupp, a gorge will be designed that connects downtown with a newly planned park. The gorge is part of a current city master plan to create a downtown pedestrian axis. Finally, the south side of the arena will become an urban edge that fosters the future development of downtown.”

Construction is expected to begin in 2015, with completion scheduled for 2017. 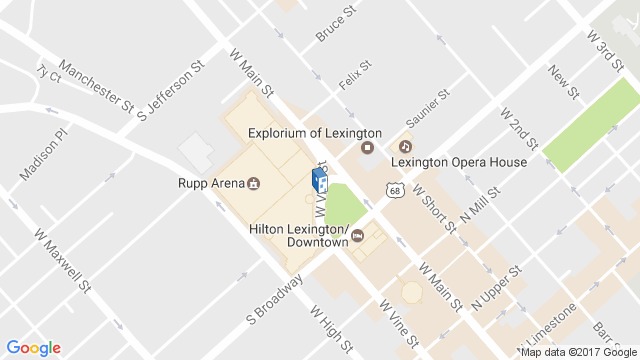