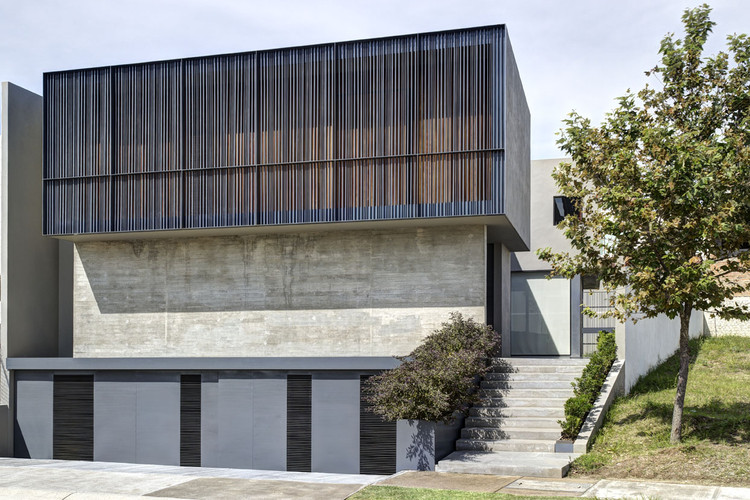 Text description provided by the architects. Casa DTF presented a challenge akin to that of casa Oval; both houses were built within the confines of a private residential community and raised similar privacy issues. In the case of Casa DTF the house program was resolved in three levels. The program distribution allows for a clear separation of private and public functions. The basement houses all service areas and the garage; the ground floor, which rises half a story above the street level, includes all public areas such as kitchen, dining and living spaces as well as a studio. The second level includes four bedrooms.

The house can be understood essentially as a pair of distinct volumes that enclose the most important elements of the program and are joined at the center by a circulation block. The envelope of each of these volumes responds to orientation and privacy. The front volume, which faces the street to the South, is practically opaque. A large window masked by a metal screen sits on top of a bare concrete wall. The back volume, on the other hand, displays a larger degree of transparency on both floors. The top portion is articulated as a floating concrete frame that cantilevers well past the glass wall underneath, to shade the living spaces and an outdoor terrace on a stone platform. A series of wooden operable panels mounted on steel rails on the second level act as shutters that prevent sunlight from entering the master bedroom and, when open, provide a clear view of the back garden.

The interiors are finished with an austere assortment of materials. Marble covers all floors on the ground level and dresses floors and walls on bathrooms. Wood was used for cabinetry, doors and stair treads; on the second level it substitutes stone on most floors except for the bathrooms, where we find a combination of marble and concrete on various surfaces. Steel plays a prominent part in the material palette as well, especially on the facades and within the middle, circulation volume, where it forms the structural framing for the stair, railings and it covers the slab edges.