Text description provided by the architects. The General Hospital of Mollet replaces the small municipal hospital in the city center and serves the 150,000 inhabitants of Mollet del Vallès and the surrounding communities in the Catalan county of Vallès Oriental. Located on the major ring road on the outskirts of the city, the hospital faces a large public park.

With respect to the program, the functional distribution was based on ideas that the architects have developed and applied in other projects dealing with healthcare buildings. The hospital is conceived as a system that is capable of ordering the diverse services and subsystems that compose it. The hierarchy established in the circulation zones guarantees fluid movement for all the users of the building and also for the efficient management of the facility. Moreover, it is a flexible system that can be adapted to different functional demands in the future.

Given its considerable dimensions of 26,000 square meters, one of the fundamental concepts behind the design of the building was to control its size: in relation to its urban and natural surroundings as well as in terms of the human scale. This concern is reflected in three outstanding characteristics.

First of all, by taking advantage of the slope of the site, the project was approached as a predominantly horizontal structure with volumes that unfold over the terrain in a staggered sequence as a way by which to reduce the visual impact of the building. Secondly, the volumes are organized around interior garden patios that provide light and ventilation.  Finally, a large public plaza was placed at the main entrance where a huge ancient oak tree existing on the site was preserved as the principal element.

The plaza is fundamental in the design of the building. It penetrates inside the hospital where it is integrated into a circulation space that recalls a rambla – the traditional pedestrian promenade that characterizes Catalan cities – acting as a link between the city and the hospital’s interior. 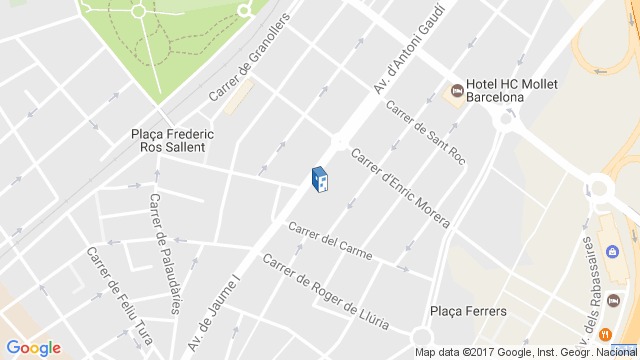