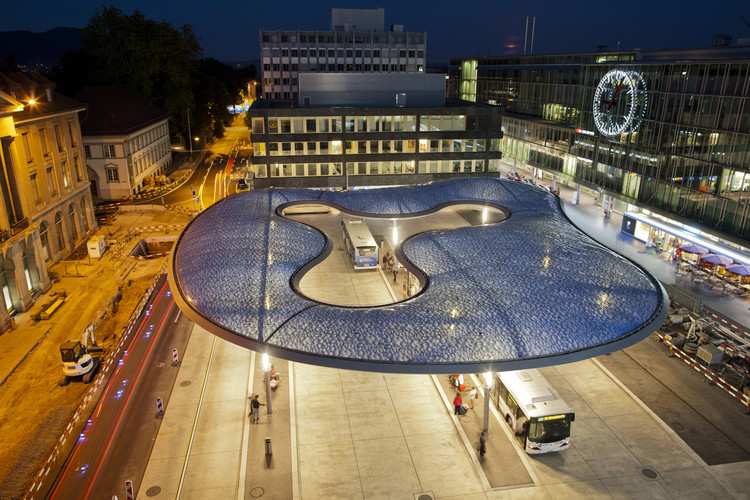 Text description provided by the architects. Recently, the Swiss city of Aarau, a cantonal capital, has gained its own cloud in the shape of an organically formed bus station canopy with a reflective and semi-translucent skin. The roof hovers, so to speak, above the forecourt of the railway station. However, unlike its meteorological namesake, this cloud provides protection from the rain and snow.

As part of the construction of Theo Hotz's new railway station in Aarau, the station forecourt and bus station have been given a new face. Existing fixtures have been removed and the underground car park relocated so that the bus stops can now all be accommodated within Bahnhofplatz. Mateja Vehovar and Stefan Jauslin have designed a bus station canopy which looks as light as a feather, with the idea of creating a haven of calm between the busy Bahnhofstrasse and the new railway station. This has created a welcoming zone for commuters transferring between the Swiss Federal Railways and Aarau's regional buses, and a hangout for night owls which radiates metropolitan flair.

At the centre of the air-cushioned membrane canopy is an organically shaped opening. The contrast between the semi-transparent surface and the open air intensifies the impression of lightness and the feeling of being out in the open, yet essentially protected from the elements. This impression has been encouraged by a series of strategic decisions: the use of a translucent membrane, both clear and blue-dyed, with a finely balanced print (by Stefan Jauslin with Paolo Monaco), the supports with their slight slant towards one axis which disappear into the cushion and carry the "cloud", the varying distances between the membranes and the support structure inside, a technical infrastructure fully integrated into the steel construction carrying water, air, electrical and sensor technology, as well as the irregular network of stainless steel cables below the cushion which is designed to give the membrane the required span. These multiple amorphous membrane bays break up the overall shape. They provide the numerous reflections and plays of light on the membrane skin, triggered by the linear luminaires arranged in line with the supports. The internal supporting structure is faintly discernible. Viewed obliquely, the supports fade into the background and the canopy gains volume.

Regardless of how light and simple the cloud appears, its design necessitated a skilled team of planners good at communicating, and close coordination of all the parties involved. For this reason, the architects Vehovar & Jauslin Architektur brought in formTL at an early stage as a specialist to deal with the support structure and membrane skin. formTL had a particular interest in ensuring that the design provided by Vehovar & Jauslin Architektur AG would be feasible, and in bringing out its lightness and filigree nature. This was achieved by basing the planning and realisation on three factors: the planning team directed by suisseplan consistently pursued the aim of building the most airtight cushion with the most economical form of operation. The consortium entrusted with the membrane cushion now consisted of committed specialist firms. Moreover, formTL was given full control of the structural planning, integration with the building services engineers, invitation to tender, management of specialist construction work and quality control.

By fastening the three-part upper and lower membranes to the curved outside tubing separately, it was possible to achieve the simple and structurally clean detailing of the cloud. With 1070 m² of covered area and a volume of 1810 m³, the roof of the bus station is the world's largest single-chamber membrane air cushion. Four 120-metre long polyethylene tubes under the road supply the pneumatic air cushion with recirculated clean, dry air, and another four tubes take the air back to the air control unit. Depending on the weather, the entire system comprising support air system, tubing and membrane cushion is maintained by sensors at 300 - 850 pascals above the outside air pressure. As only the moisture has to be removed that is diffused over the 2140 m² cushion surface, and both the cushion and the tubing are more or less airtight, the roof is highly economical to operate.

Immediately after it was commissioned, the bus station canopy was included as an exhibit at the "architektur 0.13" exhibition held in Zurich. Between 26 April and 27 July 2014 the bus station roof can be seen at the exhibition entitled "Bauen mit Luft” (Building with Air) to be held in conjunction with a 10-year retrospective of formTL at the Air Museum in Amberg, Germany. 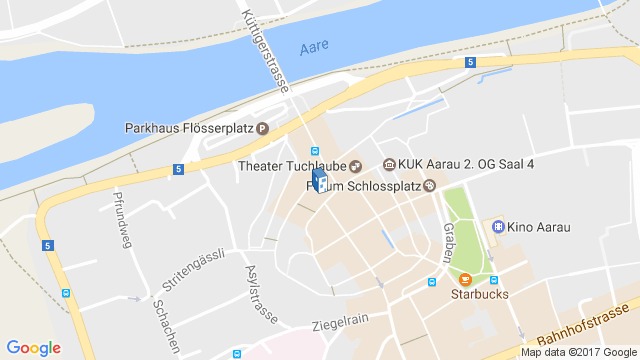