Save
House in Vincennes / AZC 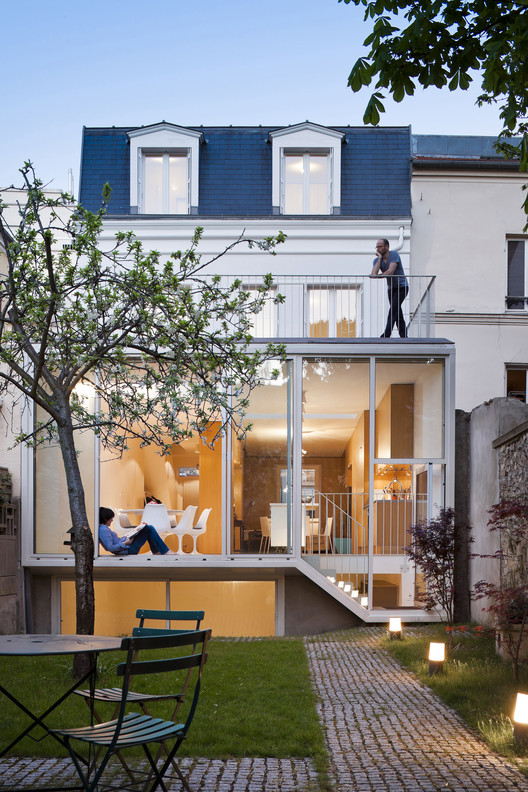 Text description provided by the architects. The object of our renovation work is a house located in Vincennes, within the radius which surrounds the Château de Vincennes, a radius monitored by architects of historical monuments.

The building seems to have remained largely in its original state since the beginning of the 20th century, and has not been renovated at all for at least thirty years. The distribution of spaces was very awkward, and any rapport between the house and the garden was nonexistent. In regards to an energy plan there was no insulation (neither within the walls nor within the attic spaces), and only single, non-waterproofed windows. The means of heating the house being individual gas burners. Almost a caricature.

In brief, the project consisted of:

- the demolition of annexes damaged beyond repair

- the completion in their place of an RDC extension around the preserved area of the house, which will open entirely upon the garden by means of a large bay window

If the successful execution of a high-efficiency project, one that sought low emission levels, was in clear evidence of being pursued, we never forgot the primary aim of an architect that is to conceive of a beautiful structure with quality spaces in which people feel good. There is also the fact that a project seeking high-efficiency is not something readily apparent, that all the elements contributing to such efficiency are almost invisible, yet remain perceptible.

According to set buying and selling property regulations the house originally consisted of an inhabitable 120m², but in fact only 90m² were livable. After the completion of work, thanks to attic spaces, a semi-recessed basement, and an extension, there will be approximately 220m² in which to live.

The heating is geothermal, with the installation of a heat pump. Interior comfort is ensured by double air flow ventilation. On the roof we envisioned solar panels as a means to produce clean, hot water.