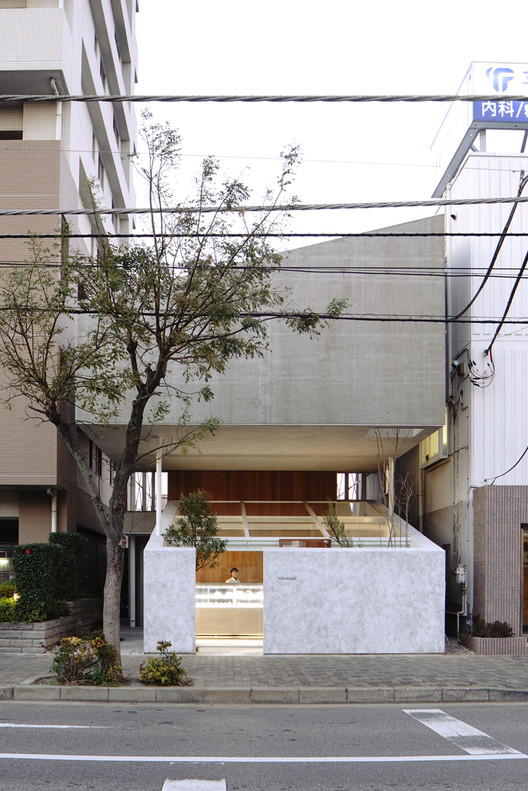 A Dwelling with shop at Katsutadai, Chiba prefecture, Japan. The outer part of 1st floor is a Patisserie and the inner part is a Cuisine, 2nd and 3rd floor is a Dwelling for a family of four peoples. This house has an aerial wedge in between 1st and 3rd floor, so that upper part of dwelling is looks like floating above a patisserie as a view on street. This aerial wedge will be changing its character as the photic layer with different times - During the daytime it will be a light-well for a patisserie, and the nighttime the lights leaking from this aperture like a treasure box is opened. And we can see a sole of dwelling volume in a patisserie based on its transparent glass roof. The wall of shop along the street is planed to 1.8 meters height and it is gradually being higher toward the inside. That is based on our intention to create a familiar open space like an empty-lot where is just surrounded by low wall.

This house has an inter-observing relationship between a shop and a floating dwelling space that makes different independent existence in a single building simultaneously. Each space has a particular sense of distance to the surrounding environment. A shop space is a kind of continuous exterior with the streetscape where is only surrounded by low wall. And a dwelling space is more separated form the surroundings where is floating above the street and has non-openings along the street, so that dwellers cannot see other houses directly and vice versa. Additionally, we put a kind of wind-path in a dwelling part that brings the wind and the sounds form the outside to the inside space, and then dwellers can be feel an atmosphere of the street. When we went their previous house for the first time (1st floor was a shop and 2nd floor was a dwelling), a curtain is closed due to concerning about the eyes from street, and they also troubled with the noise of their child’s footstep form upstairs to patisserie. Therefore, we also attempted a solution of those problems in the schematic design.

The approach is planed to have an attractive appearance with long length to change the mood between a shop and a dwelling. We intended to change a sense of distance to the surroundings with the situations - such as high public patisserie space and more independent dwelling space, and those senses of distance change the flow of time between the spaces in their life.