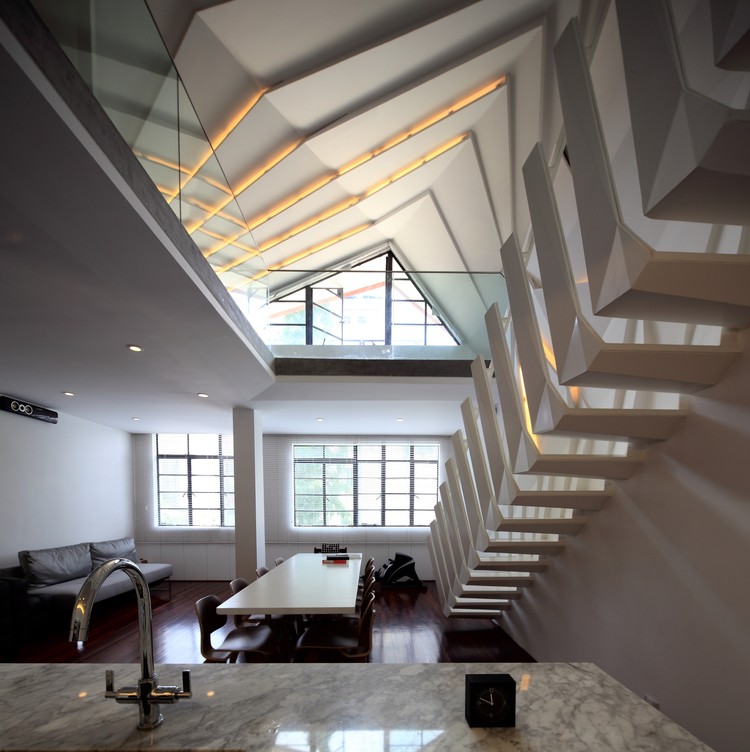 Text description provided by the architects. The alteration and addition of Wulumuqi Road Apartment took advantage of what was an interpretation of a local policy of urban beautification in the city of Shanghai. There was a city-wide policy (平改坡) where pitched red-clay tiled roofs were being added to the flat reinforced concrete roofs of modern commune housing that were considered dull and devoid of civic or traditional character. The drab housing that qualified for this alteration tends to be housing blocks that were built hastily by the Communist Party in the 1940s and 50s. However, the site for this project was a particularly poorly built Lilong housing block of the 1930s.

In the re-design of this top-floor apartment, the original flat roof was partially demolished to give way to an attic addition. This attic took reference from the vernacular form of the dormer window found in the neighborhood. The triangular form of the dormer window roof served as an archetypal form that was rigorously applied to this project – with all of its implications of structure, envelope and geometry. The addition of an attic bedroom and study meant that the main floor can be freed up as an enlarged loft-like living space with an open kitchen, instead of its original walled up bedrooms and living room.

On a formal level, the triangulation of the roof plane – necessary in a dormer window in order to bring daylight into the attic – was extrapolated to give shape to the ceilings, walls and new staircase. Indirect artificial lighting was achieved by concealing lights along the edges of overlapping triangles that made up the walls and ceilings. The staircase took on a similar form, where each tread and baluster was separately articulated to mark the culmination of these graduating and transformative triangle surfaces.

On the programmatic level, the new continuous form not only gave rise to the fluid expression of the staircase, but it also gave an organizational logic to other functional needs of the apartment, such as roof level access to a small outdoor roof patio, as well as a passively cooled interior, where hot air is able to rise and escape through the new attic windows. The rest of the apartment was kept relatively plain and simple, where the existing industrial steel windows, wooden flooring and white plaster walls were retained, in anticipation of the unfolding elements from the new attic space.

This project sets out to blend into its surrounding by adopting the city's policy of generating more pitched roof housing with civic character. Without being embroiled in an aesthetic debate of what constitutes a more contemporary language of architecture, this project simply took the pitched red-clad tiled roof as the Shanghai 1930s modern vernacular, and reconstructed a new narrative around this genealogy. The construction of the new attic roof was done with recycled red clay tiles, bricks and timber beams from demolished buildings in the vicinity, and a local builder was hired to build it in the old fashion way, using traditional and affordable sheet metal flashings and roof valley gutters and perimeter gutters. The design of this project adds a twist to the adaptation of the dormer window and pitched roof vernacular. Apart from visually connecting to the 1930s modern heritage of Shanghai, this project connects more deeply to the socio-economic roots of its surroundings by searching out the old generation of trades and craftsmen who could not only put their skills to good use, but also rebuild with recycled materials from a city undergoing rapid demolition and transformation.

The main contribution this project makes towards green building practices would be the maximum use of recycled building materials and the retention of the original architecture. The desire to go with local recycled materials and craftsmen also meant that the carbon footprint could be kept at a minimum. The majority of the added attic structures and building materials, such as recycled clay tiles, bricks and timber beams, came from neighboring sites undergoing demolition. The other notable challenge was how the original architectural fabric was retained to ensure the character of the architecture was protected. For example, original steel windows were retained in favor of standard aluminum windows, but these steel windows had to be retrofitted with insulated glazing and seals. Because the old steel window frames had very small sectional profiles, the absence of a thermal break became a less problematic issue. Supplementary heating systems and radiators were also placed along the perimeters where the fenestrations are, to minimize heat loss and gain. 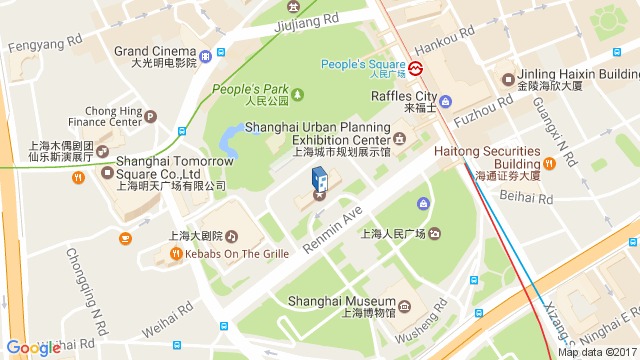 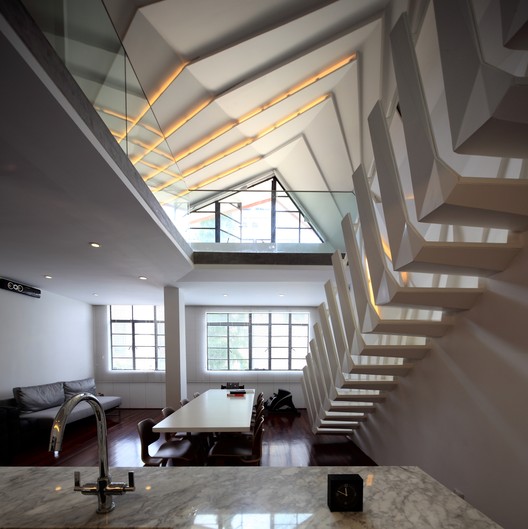